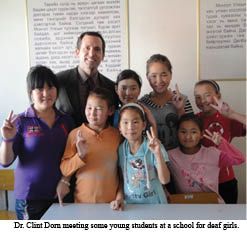 Dr. Clint Dorn, D.C., is planning on promoting chiropractic in a big way next year.  Dr. Dorn is leading a delegation of chiropractors to India next summer. The group will tour medical facilities in Delhi, Jaipur and Agra, India, from August 25-September 2, 2013.  Dorn became involved in a citizen ambassador program in 2009, through a government agency called People to People.  He traveled to China as part of a mixed medical delegation to meet medical professionals of that country, exchange information and take some time to enjoy the country’s rich cultural history.
“My first trip as a delegate made me think more globally. I started thinking about the benefit chiropractic can have worldwide,” Dorn said.  In 2009 China had already begun to integrate chiropractic into its healthcare, but the physicians he met were still seeking information.
“The medical doctors I met in Beijing had many questions, and were asking me to send chiropractic journals for them to read.” After his trip to China, Dorn continued thinking about how exciting it was discussing healthcare and chiropractic with international counterparts.  He began making contacts at People to People to see if forming a chiropractic delegation would be possible in the future.

“The response I received in 2009 as the delegation’s only chiropractor was pretty exciting. I remember thinking what a bigger impact we could make if we had more chiropractors on the trip,” Dorn said.
This past September, the government contacted Dr. Dorn and asked if he would be willing to lead a delegation of chiropractors to India in the summer of 2013.
“I immediately started looking for ways to get the word out.  Having been a part of a previous delegation, I know how life changing this trip will be.” Dorn said.
Dorn is looking for 20 delegates to fill the program.  Currently the delegation is open to all chiropractors.  Qualified delegates are accepted first come, first serve.  A number of unique opportunities are planned, including meetings with chiropractic and Ayurvedic (Indian holistic healing) medicine professionals in India, and the opportunity to share techniques, training and chiropractic principles. Delegates will enjoy insider views of the chiropractic profession in India and experience the culture in ways that most travelers never do, from exploring small, local neighborhoods and the Taj Mahal, to observing professional counterparts in their element. Cultural activities will highlight the sights and sounds of the country.
You can find more information on the trip cost, itinerary details, and enroll online at www.peopletopeople.com/clintdorn or contact Dr. Dorn at:  [email protected]