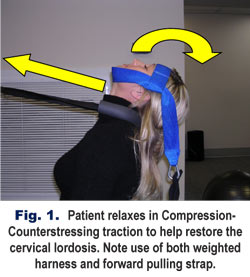 Last month, I discussed the Dakota Traction™, a simple home device for use in restoring the cervical lordosis. This time, I want to discuss a simple extension traction procedure for use within the professional office. In-Office traction has two key advantages over home traction: It helps insure some degree of compliance, especially during the early phase of care, and provides a safe supervised environment to help patients become accustomed to a regimen of extension traction care and to become proficient at using the equipment. Let’s take a look at a simple and affordable method you can use in your office, known as Compression-CounterStressing Traction (AKA, the “Stynchula Method”).

The method actually requires two simple devices. First, the patient is placed in a seated position, facing the wall, with a weighted traction harness placed so as to pull or “compress” the head downward and back into full extension (See Fig.1). A second device (the “counterstressing strap”) is placed behind the patient’s neck and attached to the wall in front of the patient. The purpose of the counterstresssing strap is to pull forward into the lordosis while the head is being extended backward. The combined result is a focused stretching of the anterior soft tissues in such a way as to reinforce the cervical lordosis. This type of traction is often much more comfortable than many other methods because the counterstressing strap provides support to posterior facet joints which are often inflamed in the typical chiropractic patient.

Compression-Counterstressing traction has been around for well over a decade now and was recently evaluated in a non-randomized clinical control trial. Thirty patients were treated over approximately fourteen weeks using the traction method in combination with typical chiropractic manipulative therapy.1 Patients in the treatment group were matched against a control group receiving no treatment. The results were encouraging. Patients in the treatment group saw improvements on the order of 13.6 degrees in their overall cervical lordosis (Jackson’s Angle) and an improvement in forward head posture of approximately 11 mm, compared to none in the controls. On a more positive note, twenty one of the original thirty in the treatment group were maintaining their corrections over a year later! These results are well in line with studies on other variations of extension traction applications and are very close to what I have personally witnessed in my own office as well.

Essentially, every therapeutic procedure carries some degree of risk and extension traction is no different. As a general rule of thumb, you should not consider applying cervical extension traction to any patient for whom spinal adjustment/manipulation of the neck would be contraindicated. Conditions which may contribute to increased risk of complications might include: high blood pressure, hypertension, diabetes, atherosclerosis, arteriosclerosis, posterior osteophytic spurring, disc protrusion/prolapse, smoking, oral contraceptives, prolonged use of corticosteroids, Down’s Syndrome, spinal stenosis, or any history of cerebrovascular disease. Doctors should also be very wary of patients presenting with any unexplained loss of consciousness, disturbances of vision or equilibrium, transient ischemic attacks, spinal fracture/ instability/malignancy or disease, hemophilia or other blood clotting disorders, including anticoagulant therapy. This list isn’t necessarily complete, but should provide interested doctors with a good idea of the types of conditions which may represent unacceptable risk factors. In addition to a complete history, all patients should undergo a physical screening procedure as well. A complete description of our patient screening procedure is available free upon request and I will discuss patient safety at more length in a future article.

Assuming there are no contraindications, adult patients generally start with three pounds of weight on the traction harness. The head is allowed to relax into full extension and the counterstressing strap is then angled and tensioned so as to properly reinforce the cervical lordosis and maximize patient comfort. Treatment time is generally increased about a minute or so each visit, according to patient tolerance. Although the optimum time for soft tissue stretch is probably in the 20-30 minute range, such longer sessions are best done by the patient at home. I prefer to keep In-Office traction sessions to a more manageable 10-12 minute range and then increase the weight slightly once the target time has been reached. It’s not unusual for patients to work up to five or six lbs of weight after only a few weeks of traction in the office.

In my opinion, Compression-CounterStressing Traction should be your number one choice for In-Office traction for several reasons. First, the method is easily learned by doctors and staff and will only cost about a hundred bucks per station to set up. Secondly, the method is well tolerated by most patients and so simple your patients will quickly learn how to transition themselves in and out of traction with minimal assistance. Third, it’s very space efficient. Traction stations can be placed about every 32 inches or so along the wall of your rehab area, so one small wall space can easily accommodate a number of patients at once. Finally, offering In-Office traction will help boost your bottom line while helping your patients achieve real and meaningful structural change. I routinely have clients call to say their new traction equipment paid for itself on day one.

For a more complete discussion of potential risk factors, patient screening procedures, and treatment protocols, call Dr. Payne at 1-334-448-1210 for his free report on Patient Safety. Dr. Mark R. Payne is the president of Matlin Mfg., a manufacturer and distributor of postural rehab products since 1988. To download a full and unabridged version of this article, link to www.MatlinMfg.com.