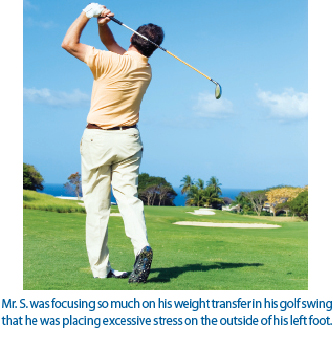 :dropcap_open:A:dropcap_close:s chiropractors, when we conduct our case histories and examinations we typically determine mechanisms of injury to be related to specific instances of trauma, repetitive macrotrauma or microtrauma. However, we should also consider posture, activities of daily living and hobbies as these can sometimes be the root cause of a patient’s pain. Today we are going to take into consideration a patient whose hobby provided the underlying cause.

Mr. S. is a well-known golfer in our area. He is 60 years of age, has won several county senior titles and has played at a very competitive level for many years. He presently plays at a “scratch” handicap. Mr. S. has been a patient for a number of years and has always understood the importance of regular chiropractic adjustments and exercise. Early this spring, he came to us with a new complaint of pain in his left low back area radiating into his left hip. Pain was also noted in the area along the lateral tibia of the left leg and continued pain over the lateral aspect of the foot. Mr. S. also feels that when he walks he is placing more pressure down on the left foot.

He denies any falls or accidents. When we asked him if he had changed any activity in his exercise program, he stated he was doing the same thing he had in the past. Examination of his gait cycle demonstrated a longer stance phase on the left side in comparison to the right. Video analysis also noted a slight limp with his left leg when he proceeded through the stance phase of gait. Muscle testing noted a weakened abductors bilaterally and gluteus maximus on the left. The left foot showed reduced dorsiflexion while walking and through active and passive ranges of motion. A digital foot scanner demonstrated that Mr. S. had symmetry of all three arches on the right foot, but on his left foot the lateral arch had dropped significantly. Showing Mr. S. the results of his scan, he remembered that he started doing some golf drills that helped him keep more pressure on his left side when finishing his swing, and that they put a lot of stress on the outside of his foot. He stated, “The pain did start a few days after I started those drills!”

Our treatment included stabilizing orthotics to provide his feet with symmetrical stability. Also, we adjusted the left foot after we determined his reduced dorsiflexion was due to a misaligned calcaneus and talus. Abduction exercises and glute-strengthening exercises were all recommended to provide additional stability to further enhance the chiropractic full spine adjusting. We hypothesized that Mr. S. was focusing so much on his weight transfer in his golf swing that he was placing excessive stress on the outside of his left foot. Coupled with rotation stress during his swing finish he developed a neuro-musculoskeletal condition through his changes in his normal biomechanical movement patterns.

Although he could not initially recall a mechanism of injury for the complaints that brought him back into our office, after examination and further questions about his lifestyle and hobbies we were able to determine the root cause of his pain. Since we had no history of any additional trauma, some activity in his daily living had to be a contributing factor. This is an important step to apply with any patient who complains of pain without injury. Consider a patient’s hobbies and see if what they do for fun could be the source of their pain.