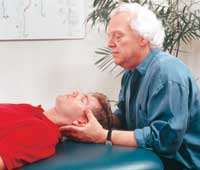 CranioSacral Therapy (CST) is a manual modality that has made its way into the chiropractic clinic as an effective adjunctive therapy.  It focuses on normalizing the craniosacral system, which extends from the skull, face and mouth down to the sacrum and coccyx.

The craniosacral system consists of a compartment formed by the dura mater membrane, the cerebrospinal fluid within the membranes, the systems regulating fluid flow, the bones that attach to the membranes, and the joints and sutures interconnecting these bones.

The system operates like a semi-closed hydraulic system based on the rhythmic rise and fall of cerebrospinal fluid volume and pressure in the dura mater.  According to research1-8 performed at Michigan State University, the bones directly relating to the dura mater must be in continual, minute motion to accommodate the constant fluid pressure changes within the membrane compartment.

Through gentle palpation, the CST practitioner uses the craniosacral rhythm as a diagnostic and therapeutic tool.  The rhythm is produced by the craniosacral system and its attached bones as they move to accommodate the filling and emptying of cerebrospinal fluid.

The changing volume and pressure cause corresponding changes in dura mater membrane tensions, which induce small accommodative movement patterns in these membranes.  When the natural mobility of the dura mater or any of its attached bones is impaired, sensory, motor or neurological disabilities can result.

CranioSacral Therapy can effectively release those restrictions and allow the membranes and bones to assume normal mobility.

My interest in CST was piqued by its ability to affect soft tissues that, when contracted, can pull on bones.  One patient came to me complaining of headaches.  I found muscle contraction in the left leg from a previous ankle sprain.  When I released the muscle and fascia, the structure easily went back into place and the headaches went away.

Another patient had sustained a mid-thigh blow.  I worked to release contraction in the belly of the muscle and fascia, which allowed the leg and pelvis to release.

The beauty of CST is how you can influence cranial nerves by releasing membrane restrictions inhibiting their function.  This has been helpful in addressing tic douloureux, head injuries or Bell’s palsy.

I once saw Tom, who was diagnosed with Bell’s palsy.  He woke up one morning to find his face paralyzed.  After one office visit, he reported about 50 percent relief.  About three weeks of visits later, he considered the problem solved.  His emotional outlook was better, too—he had been told he might suffer the effects of Bell’s palsy for months or more.

Contraindications include conditions adversely affected by subtle changes in intracranial fluid pressure: acute intracranial aneurysm with threat of rupture, acute cerebral hemorrhage, acute subdural or subarachnoid bleeding, and situations in which increased intracranial pressure that could precipitate a medullary or brain stem herniation through the foramen magnum.

CST vs. Other Cranial Methods

While CST has been compared to Cranial Osteopathy or Sacro-Occipital Technique (SOT), the methods are quite different.

The hand pressure used in CST is slight (about 5 grams) while other methods may use more force.  The positive effects of CST rely on the hydraulic forces within the system to contribute to the corrective process.  The CST practitioner focuses on removing obstacles that the body’s normal self-correcting abilities have been unable to overcome.

Unlike SOT, in which a specific protocol is followed, the CST practitioner follows cues from the body to determine how corrections should be made.  When the therapist uses this gentle approach, CST is extremely safe and effective.