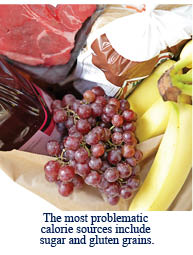 :dropcap_open:T:dropcap_close:he general goal with diet and supplements for athletes should be to promote an anti-inflammatory state so body better responds to the wear and tear generated by heavy exercise 1-3. With this in mind, diet and supplement recommendations can be uncomplicated.

Humans have historically lived on health-promoting foods, including wild game (land animals, fish, and birds) and vegetation in the form of vegetables, fruits, nuts, tubers, and spices. Athletes and non-athletes should be consistent with our historical eating patterns. Grocery stores have a wide variety of natural animal proteins and vegetation, such that we can literally go to our favorite store and behave as modern hunter-gatherers. Athletes, versus non-athletes, will typically need additional calories, which means that athletes need to eat larger amounts of healthy foods 1-3.
There are no special supplements that will make an athlete perform better. Peak performance at any level is largely due to a proper mental state. There are certain key supplemental nutrients that we all need and this also applies to athletes. The most important appear to be vitamin D, omega-3 fatty acids, magnesium, and probiotics. Multivitamin use is also reasonable. Athletes should also consider the regular use of anti-inflammatory botanicals such as ginger and turmeric, as well as proteolytic enzymes 1-3.
There are certain calories sources that should be avoided by all of us, especially athletes. The most problematic calorie sources include sugar and gluten grains.
Avoiding Sugar
A recent CNN report by Dr. Sanja Gupta focused on the health problems associated with sugar consumption 4. The final third of the show included an interview with a cancer researcher who said that he absolutely avoids sugar because it helps to promote cancer; tumor cells essentially need sugar to grow and thrive. Unfortunately, the average American’s diet contains approximately 20% of calories from refined sugars and 20% from refined flours 5, which means that the average American is pursuing cancer expression. So the notion that endurance athletes should “carb load” with high glycemic refined carbohydrates is patently absurd.
One could try to argue that it is the chronic consumption of refined carbohydrates that is the problem and not when carb loading is related to athletic activities. Unfortunately, this argument falls flat. The consumption of 50 grams of available carbohydrate as glucose and white bread, but not pasta, led to a significant postprandial increase in monocyte nuclear factor-kappaB (NF-KB) activation in subjects in their twenties with and a body mass index (BMI) of 22 6. NF-KB is a marker of inflammation as it leads to the production of pro-inflammatory cytokines and other inflammatory mediators.
So, refined carbohydrates cause cancer in the long term and surges of inflammation immediately after eating. How can this be a good thing for athletes of any kind? One could argue that refined sugar is okay in moderation. This may be true, but no one knows what level of moderation is safe. Moreover, refined carbohydrate eaters generally eat too much as mentioned above; that is, 40% of American’s calories come from refined carbohydrates. The other glaring problem is the issue of sugar addiction. The same Sanja Gupta specially outline how refined sugar activates the same addiction pathways in the brain as cocaine 4.
The exception mentioned above was pasta, which, because of its low glycemic index, did not appreciably activate NF-KB 6. Does this mean that pasta in general and pasta parties before endurance events is a smart choice? The answer, again, is no.
Avoiding gluten
Wheat, rye and barley all contain gluten. While most individuals do not express overt celiac disease, the consumption of gluten causes a harmful pro-inflammatory IL-15 mediated immune reaction in all individuals 7. Why would any athlete want to regularly dine on foods that cause gut inflammation?
Not generally appreciated is that gluten consumption can cause a host of problems in individuals who do not have celiac disease. This is because gluten consumption causes a low grade leaky condition that may not produce any gut symptoms. Gluten causes gut enterocytes to produce a protein called zonulin that disassembles gut tight junctions, allowing for gluten and bacterial antigen penetration 8. The bad news is that multiple diseases have been linked to zonulin production including classic autoimmune diseases such as multiple sclerosis, rheumatoid arthritis, type 1 diabetes, inflammatory bowel disease, systemic lupus erythematosis, and ankylosing spondylitis 8. Several cancers are also associated to gluten/zonulin, including those of breast, brain, lung, ovaries and pancreas 8.
Zonulin/gluten has also been associated to the expression of schizophrenia 8.
Multiple mental disorders are caused by gluten sensitivity including depression, anxiety disorders, mental fog/lethargy, and attention deficit disorders 9-11. The reason for the mental disorders is thought to occur because gluten causes cerebral vascular hypoperfusion 11. Clearly, an athlete who wished to be in tip-top condition should avoid gluten, especially for the purpose of reducing the chance of brain hypoperfusion.
The practice of sugar/gluten loading before an endurance event should be avoided. Potatoes are a non-gluten starchy carbohydrate that are a better choice, and they also contain an abundance of potassium that is needed for proper muscle function and vascular function. Grains, in fact, contain virtually no potassium.
References
Dr. Seaman is a Professor of Clinical Sciences at the NUHS branch campus at St. Petersburg College in Florida. He is also a Clinical Consultant for Anabolic Laboratories. He has written numerous articles on the treatment options for chronic pain patients, with a focus on nutritional management. He can be reached at deﬂ[email protected]ﬂame.com.