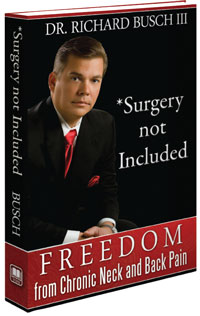 Periodically, I talk with a physiatrist, a medical doctor who specializes in physical medicine, and we have discussed the long-term outcomes of our patients. He had worked within an orthopedic group for years. During one conversation, he confided that he had left the group after a disagreement on the management of their patients. The majority of their patients who had herniated or degenerative discs were operated on without exploring all of the conservative treatments available and, often, never considering any of them. He told me that, in his professional opinion, the problem was surgery. Surgery may help a percentage of patients for the short-term, but it often creates long-term problems. For that reason, he decided to leave the group. I told him that, with my treatment option, the DRS Protocol™, I have had a strong track record, even with patients who have had failed back and neck surgeries. He stopped and said, “Can you just imagine how great your success rates would be if these patients had never been operated on in the first place?”

An article in Prevention Magazine, July 2008, entitled “Where You Live Determines Your Quality of Care,” notes that the reason why back surgery is recommended may be as simple as the geographical region where the patient lives. Although no one can really know for certain, statistics from Medicare data show there are specific areas in the United States that have considerably higher per capita rates of back surgery than others do. In some areas, the rates are as much as 20% higher. The conclusion is that this could be considered a “surgical signature” or practice style. When the best treatment is unclear, doctors may simply follow the trend in the area.

There are unfortunate side effects for patients who have had surgery for disc conditions, especially fusion-type surgeries. These surgeries have a shelf life of two to five years, in many cases, before the patient may begin to experience “failed surgery syndrome.” This can occur because the bones or vertebrae are fused together, and the fused bones no longer move normally. This causes more movement and force on the vertebral levels above and below the fused vertebrae, which leads to degeneration and more of the same problems in the areas adjacent to the fusion. A study published in the July 2000 issue of Spine confirms that, less than five years after spinal fusion, the adjacent vertebrae have disc narrowing or degeneration. Unfortunately, fusions are increasing (they doubled from 9% in 1993 to 19% by the year 2000) and, while this rapid growth might suggest the surgery is effective, it has actually increased the need for repeated spinal surgery after spinal fusion. By 2000, the risk of repeat surgery in the first years after lumbar fusion was 40% higher than it was in 1993. Repeat lumbar spine operations are generally undesirable, implying persistent symptoms, progression of degenerative changes, or treatment complications (noted in “Increased Use of Spinal Fusion Hasn’t Lowered Risk of Repeat Back Surgery,” Spine, September 1, 2007).

In conversations with my patients, I have noticed that some surgeons are no longer rushing patients to surgery. What these surgeons are recommending is that patients wait until they can no longer bear the pain before even considering surgery.

After surgery for disc conditions of the back or neck, patients are often surprised and upset that they still have ongoing weakness and pain. This is frequently due to scar tissue, which is fibrous connective tissue created by the body for wound repair. If the scar tissue forms near a nerve root, which is a common occurrence in back or neck surgeries, this can cause pain. Nerve damage can be a direct result of scar tissue from the surgery. It happens to patients who have “successful” surgeries and yet continue to have pain. This can happen most often about 6 to 12 weeks after the surgery, and can follow an initial period of pain relief. The patient just slowly redevelops pain.

Internal scar tissue can create adhesions and attach to internal structures causing pain. Scar tissue can be a debilitating side effect of surgery, because it can wrap around a nerve and, more or less, strangle or compress it over time. The pain caused by this can vary from mild to extreme, and it can cause constant or intermittent numbness and low back pain that radiates into the legs. This is known as sciatica, which can come on slowly, leading to an increase in intensity, and can even lead to a loss of coordination and restricted movement. In the neck area, a similar occurrence can take place. Some of the symptoms are pain down the arm, a weak hand grip, and numbness.

“Prior to opting for surgical intervention of your patients, I urge you to investigate the impact of methods such as the DRS Protocol™ that I have found so effective in my practice.”

Dr. Richard E. Busch III, a nationally recognized chiropractor and consultant, is currently launching his book *Surgery not Included, which reveals a successful, nonsurgical treatment protocol for chronic and severe disc patients.  Any clinician who wants to help their patients avoid back or neck surgery, or has “failed back surgery” patients, must read this book. To get your copy of *Surgery not Included now for $29.95 +S/H., call today 1-888-471-4090, EST, or go to www.surgerynotincluded.com.