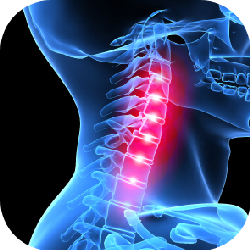 The whiplash experiments in this study were collisions at less than 6 miles/hour.

1. This study showed that pre-whiplash accident straight or kyphotic curvatures of the cervical spine increase injury to the facet joint ligaments.

2. Specifically, straight or kyphotic curvatures of the cervical spine increased cervical facet capsular ligament stretch by up to 70%.

7. There is increased whiplash injury severity for patients with pre-existing abnormal cervical postures.

9.  The first phase of whiplash injury is a non-physiologic S-curvature characterized by flexion in upper and extension in lower cervical segments, and this is when the primary whiplash injury occurs.

10. During the initial whiplash non-physiologic S-curvature phase, the cervical facet joints are injured due to the stretch of the capsular ligaments.

13. In a 5-year study of 146 patients, those with cervical kyphosis, but with no degenerative changes after whiplash injury, had a significantly higher incidence of disc degeneration in the lower cervical spine (C5-C6) than those with normal curvatures at the time of injury.

15. Cervical spondylosis at one level pre-disposes the levels above to early instability and decreased load carrying capacity.

16. Straight or kyphotic curvatures of the cervical spine influence ligament elongations during whiplash trauma, and also influence the long-term prognosis of the injury.

17. Head restraints have limited (5-20%) ability to decrease neck injuries in rear impacts, because greatest ligament stretch occurs during the S-curvature, before the head contacts the head restraint.

18. Capsular ligament stretch from whiplash, particularly in kyphotic postures, leads to motor unit laxity and to spinal degeneration over time.