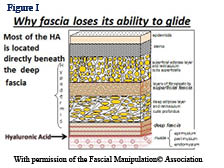 :dropcap_open:M:dropcap_close:odern myth has it that doctors in Europe are ahead of us in new methods of healing.  The truth of this may be dubious but it does underscore the importance of keeping abreast of healing advances in other countries as we strive to achieve the highest possible level in care for our patients.
:quoteright_open:Research has shown that the reason fascia is able to glide over and within muscle is due to hyaluronic acid (HA).:quoteright_close:
Three years ago, I was invited to Italy to meet with Luigi Stecco, PT.  I observed Luigi treat patients for three afternoons, 5 hours each day.  He divides each day into two 5-hour sessions, the morning being devoted to research and reading.
Over the course of my career I have had the honor of observing many masters practice, such as Gonstead and Goodheart, among others, but never before have I seen treatments which yield such immediate results. I learned from Luigi’s son Antonio (Antonio Stecco, MD physiatrist who was translating for us) that none of these patients had been to see Luigi for the last 3 to 10 years. Luigi had, indeed, discovered a way to “find it, fix it and leave it alone.”
He had previously sent me one of his two textbooks written in English ¹. At the present time this textbook has been translated into seven languages. I eventually took the first 12 day FM course in Italy that was presented in English and have since introduced it into the US with Antonio Stecco. FM has been taught in Europe for 14 years and is presently being taught around the world. (Go to: www.fascialmanipulationworkshops.com, www.fascialmanipulation.com). The first thing that attracted me about FM is that there is probably more peer review literature on FM than possibly all the soft tissue methods combined.  Go to www.pubmed.com (the national library of medicine) and put in Stecco, C or Stecco, A and you will see about 70 articles, most submitted over the past three years.  I am a consultant for Graston Technique®(GT) and in 2012 a large percentage of the people taking  FM were users of GT.  I told them that FM was the PhD course for GT. Actually it is a PhD course for almost all soft tissue methods.  As stated in the first manual of the first International Fascia Research Congress²  “Hypotheses which accord myofascia a central role in the mechanisms of therapies have been advanced for some time in the fields of acupuncture, massage, structural integration, chiropractic and osteopathy”.  The official definition of fascia from this congress is “Fascia is the soft-tissue component of the connective tissue system that permeates the human body, forming a whole-body continuous three-dimensional matrix of structural support.  It interpenetrates and surrounds all organs, muscles, bones and nerve fibers, creating  a unique environment for body systems functioning.”

So what is this white stuff covering everything in our body?  The infinite wisdom of nature would not just bother to cover our whole body with white stuff that solely functions as a covering.  Probably the most important function of fascia is that it is a sensory organ loaded with mechanoreceptors and proprioceptors. Every single muscle fiber in our body is covered by fascia.  Many muscles originate and insert into fascia, not to mention the intramuscular fascia. Whenever a muscle is stretched or contracts the surrounding fascia must be stretched.  The muscle spindle cell should be called the fascial spindle cell since they are located in the fascia.  As soon as a muscle is activated, spindle cells immediately report back to the CNS the status of the muscle such as its tone, position and movement.  In order for this mechanism to work properly, fascia must have a normal viscosity whereby the spindle cells, Paccini and Ruffini receptors can be normally stretched.  What if fascia is restricted and unable to glide over the muscle or within the muscle during muscle activity?  Alteration of fascial movement due to increased viscosity (density) of the fascia would lessen the normal feedback to the CNS and muscle incoordination would occur.  A recent e-mail exchange with Siegfried Mense, MD a leading expert on muscle pain and neurophysiology was asked if fascial adhesions would have an adverse affect on spindle  cells.  He stated: “Structural disorders of the fascia can surely distort the information sent by the spindles to the CNS and thus can interfere with a proper coordinated movement”.  Antonio Stecco, MD has many ultrasound studies showing the correlation between stiff thickened fascia and diminished sliding being responsible for neck pain³. Helen Langevin, MD did an ultrasound study showing that people with chronic or recurrent low back pain compared to no low back pain had 25% greater perimuscular thickness and echogenicity4.
Research has shown that the reason fascia is able to glide over and within muscle is due to hyaluronic acid (HA).  Due to trauma or stress to soft tissue HA chains begin to entangle and dramatically increase viscoelasticity . Figure I shows HA between the deep fascia and the muscle. HA is also located in the intramuscular fascia. Deep pressure which increases the temperature of tissue three to four degrees untangles the HA and promotes a more fluid medium allowing normal gliding.  Interesting also is that increased alkalinity also helps free up the HA, but I have no particular nutritional information on this subject.

How does FM work to free the fascia and how does it differ from all other soft tissue methods. Over the years Luigi Stecco realized that there were particular areas in the muscles and retinacula around joints that when released solved many musculoskeletal problems. Stecco found that muscles work in groups and that we could consider these groups in terms of myofascial units (MFU).  Luigi thought that if there are muscle fibers contracting together as a group, then for a particular direction some of the fibers will be tensioning their overlying and intra fascia when they contract and somewhere there will be a mathematical point where the vector forces will converge in a given movement pattern.  In other words specific motor units will converge on a point in the deep fascia for a specific direction. He called these points centers of coordination (CCs) which were located in a myofascial unit.  A MFU is defined as particular motor units activating monoarticular and biarticular muscle fibers, their deep fascia and the joint they move in one direction on one plane  (Figure II.)  The CCs are often in the belly of the muscle where most of the fascial spindle cells are located. These areas are often proximal to the painful area and the patient is often surprised that they are tender.  But if these points are involved they will be palpated as densified, tender areas.   Luigi has correlated functional testing (contraction or passive stretching of the area) with these points.  For example anterior forearm pain could be created by palpating and treating anterior points not necessarily on the forearm, see figure II.  Figure II represents 4 MFU making up an anterior sequence.  Fascia is stretched by a muscle due to its fascial expansions and this tension is transmitted during a forward movement of the arm. During forward movement of the whole arm the contraction of the clavicular fibers of the pectoralis major will stretch the anterior region of the brachial fascia due to its myofascical expansion.  The simultaneous contraction of the biceps muscle will stretch the anterior region of the antebrachial fascia by way of the bicipital aponeurosis (lacertus fibrosis) as the palmaris longus pulls on the flexor retinaculum, palmar aponeurosis and thenar fascia. The anatomical fascial/muscle connection for example has been shown in anatomical dissection by the Steccos 6. While this forward movement is occurring the proprioceptors within the fasciae are activated permittingthe perception of the motor direction.
Testing for forearm pain along the anterior plane would include testing of the shoulder at 90° (an-hu), testing the biceps area (an-cu), testing of the forearm (an-ca, myofascial of the flexor carpi radialis), and flexion of the thumb (an-di).  The fascia in the sagittal plane is therefore being tested and then palpated for density in the areas where the tests were positive.  Often the forearm pain may be resolved by treating an-hu or even an-di.  In other words, the tension in a particular myofascial plane is evaluated before treatment is applied.  During this examination the horizontal and coronal planes would also be examined.  Examination of function and the most dense and tender points would determine which plane to treat.
What is significant about FM is that the fascial planes throughout the body are considered connected, just as acupuncture points as considered in meridians.  Most of Stecco points happen to also be acupuncture points, so often an anterior hip pain could be resolved by treating an anterior lumbar, pelvic, hip, knee or foot area along the plane.  We have all found that working on local points may help a local problem, but unless tension is removed throughout the whole plane the condition will return.  This is true for back and neck problems as well as the whole body.
Carla Stecco, MD is an orthopedic surgeon who has studied the fascia of unembalmed cadavers for years and next year will be the first of its kind ever, a textbook entitled An Atlas of the Human Fascial System.  I have already read a few chapters and the information is amazing.  I guarantee that learning this work will revolutionize what you do as a practitioner.
References:
Warren Hammer DC, MS, has lectured nationally and internationally on soft tissue treatment. He recently completed his third edition of Functional Soft-Tissue Examination and Treatment by Manual Methods available from Jones & Bartlett. He has written over 300 soft tissue articles for Dynamic Chiropractic including articles for the Journal of Manipulative and Physiological Therapeutics and the Journal of Bodywork and Movement Therapies. For more information, visit: www.fascialmanipulationworkshops.com