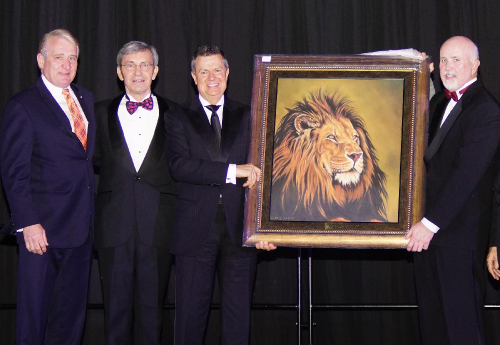 Kent S. Greenawalt Given WFC Honor Award at 12th Biennial Congress in South Africa
ROANOKE, Virginia—Foot Levelers, Inc. Chairman and CEO Kent S. Greenawalt recently received an Honor Award from the World Federation of Chiropractic (WFC) at the organization’s 12th Biennial Congress, which was held at the International Convention Center in Durban, South Africa. Greenawalt received the award to recognize the positive impact he and Foot Levelers have had on the chiropractic profession both within the United States and internationally.

The World Federation of Chiropractic Honor Award has been given out annually since 1991; and of the 24 all- time recipients Greenawalt is just the eighth from the United States. The award, which is the highest given by the WFC, is designed to honor those that have provided “outstanding services to the international growth and advancement of the chiropractic profession.”
David Chapman-Smith, the Secretary-General of the WFC, noted the contribution Greenawalt and Foot Levelers have made to the international chiropractic profession, “The WFC wanted to honor Kent for the support he has shown for international chiropractic, which has included providing complimentary speakers to WFC seminars to pioneer chiropractic in places like Brazil, Hong Kong, Dubai, and Budapest.”

Chapman-Smith also referenced the financial support Greenawalt and Foot Levelers have delivered to the WFC, “The financial support the WFC receives from Kent and Foot Levelers is instrumental in the success of our key initiatives. As an example, their support for a recent consultation was vital in leading to the agreed market identity for chiropractic as the spinal health experts.”
For Greenawalt, the award came as a surprise and honor, “It came as a surprise to me when I learned I would be receiving the award. It’s an honor to join the impressive list of wonderful people who have received the award before me. The role the WFC plays in helping improve global healthcare is extremely important, and Foot Levelers will always be at its side to assist in achieving its goals.”

In addition to the Honor Award he received from the WFC, Greenawalt was also presented with an award by the Fédération Internationale de Chiropratique du Sport (FICS) to commend his support of sports chiropractic and Foot Levelers’ sponsorship of the FICS Assembly, which was held in conjunction with the Congress.

Greenawalt commented on the importance of receiving an award from FICS, “Along with the WFC, FICS is an important resource in growing the chiropractic profession internationally.”

There were over 750 delegates from at least 42 countries at the Congress, which was also celebrating the 25th anniversary of the World Federation of Chiropractic. One purpose of holding the Congress in Africa was to represent and positively impact the advancement of the profession on the continent.

Foot Levelers, Inc., the world’s exclusive provider of individually designed Stabilizing Orthotics and other therapeutic products, has been serving healthcare professionals for over 60 years. Foot Levelers supports every step patients take to enjoy fuller and happier lives at work, home, or play.