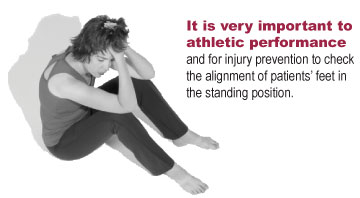 Foot position and alignment are important factors that must be considered in our active population. As we encourage more of our patients to walk, jog, and exercise, we need to be prepared for the “side effects” of our recommendations if any foot problems exist.

For example, a 1998 study of runners found that those who pronated more while running had a much greater likelihood of developing a sport-related injury.1 While this isn’t surprising to most of us who have been treating athletes, it helps us to explain why custom-made, stabilizing orthotics can be so helpful in preventing athletic injuries.

This retrospective study looked back at the characteristics of athletes who reported recent foot and leg overuse problems and compared them with a control group. The researchers were interested in finding whether excessive pronation (using a method of measuring pronation while weightbearing) correlated with the possibility of developing various types of “overload” sports injuries.

The clinical conditions evaluated in this study are known as “overuse,” or “overload” injuries. These injuries develop when the body is unable to strengthen and rebuild in response to strenuous and repetitive athletic or work activities. In this study, sixty-six injured athletes who ran at least once a week—and who had no history of traumatic or metabolic factors to their overuse injury—were the study group. Another (control) group of 216 athletes were matched who had no symptoms of overuse injuries.

The amount of pronation during standing and while running at “regular speed” was determined by measuring the angles of their footprints. This inexpensive method of determining the amount of pronation during functional activities (plantar prints) had been previously investigated.2 One of the advantages of this method of measuring pronation is that it can be done without X-rays (no radiation exposure) and is not time consuming.

The investigators found that athletes with more pronation had a much greater likelihood of having sustained an overuse athletic injury. They also established that the amount of pronation seen in the standing, weightbearing footprint was the more predictive of developing an overuse injury. This study reminds us that it is very important to athletic performance and for injury prevention to check the alignment of patients’ feet in the standing position.

The researchers in another study performed a visual assessment of the feet of seventy-seven athletes while they were standing.3 After classifying the feet as obviously pronated, obviously supinated, or neutral (based on agreed-upon mandatory criteria), the investigators inquired into the history of knee pain. Those athletes who answered “yes” to the question of knee pain were more than twice as likely to have an abnormal foot alignment. This study found that “athletes with excessively pronated or supinated foot types may be more susceptible to knee pain than athletes with neutral foot types.” Since knee injuries can often ruin athletic aspirations, controlling pronation and absorbing the shock of supination could be crucial for many athletic patients.

Some knee injuries seem so sudden and unpredictable that prevention would appear to be impossible. This may not actually be the case with many acute injuries to the anterior cruciate ligament (ACL). An important study looked at pronation in athletes and found a higher risk of injury to the ACL in those with hyperpronation.4 These researchers looked at the amount of arch collapse to determine the tendency to excessive pronation. They used the “navicular drop test,” which is another easy method to assess a patient’s foot and can be done quickly in the office. “Postural Stability Indicator” (PSI) cards—which explain how to do the test and also record your findings—are available free, just by dialing 1-800-553-4860.

When the researchers compared fifty subjects who had sustained an arthroscopically diagnosed rupture of their ACL with fifty uninjured matched controls, they found that higher scores on the navicular drop test correlated with a history of ACL injury. Since the score on the navicular drop test increases with greater amounts of pronation, and especially with collapse of the medial arch, they were able to conclude that abnormal foot alignment predisposed an athlete to knee injury. In fact, they stated that “hyperpronation of the foot and ankle complex may increase the risk of injury to the ACL.”

These retrospective studies clearly demonstrate the correlation between foot position and function, and various biomechanical problems and injuries. Talk to your patients about these factors, and explain why they should be evaluated for custom-made orthotics. I have found that most patients, and athletes in particular, appreciate it when their doctors demonstrate their expertise by discussing research findings which can help improve performance and prevent future problems and injuries.

Kirk A. Lee, DC, CCSP, is a 1980 graduate of Palmer College of Chiropractic and a member of the Palmer College of Chiropractic Post Graduate Faculty. He currently practices in Albion, Michigan. Dr. Lee has lectured nationwide on sports injuries and is a featured speaker for Foot Levelers’ 2008 Spring Seminar Series (call 1-800-553-4860 for information and registration).