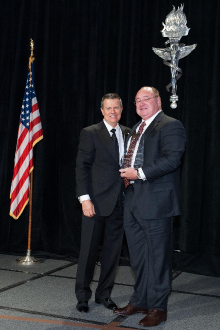 CARMICHAEL, Calif. – March 18, 2013 –The Foundation for Chiropractic Progress (F4CP), a not-for-profit organization dedicated to raising awareness about the value of chiropractic care, is pleased to announce that Frederick R. Carrick, D.C., Ph.D., has been named the first recipient of its “Champion of the Year” award. The award, which acknowledges an individual for outstanding achievement in public relations and positive press for chiropractic, was presented to Dr. Carrick at the 50th Anniversary Gala of the American Chiropractic Association (ACA), on March 7, 2013, at the Capital Hilton in Washington, D.C.

“Dr. Carrick exemplifies our mission: generating positive press for chiropractic,” states Kent S. Greenawalt, chairman, F4CP. “His highly acclaimed team of doctors, delivery of care and treatment of neurological disorders has gained exceptional media coverage for its remarkable outcomes. Any doctor of chiropractic who achieves this level of positive publicity for the chiropractic profession deserves high-profile recognition.”
Nominated in part by the ACA Council on Neurology, Dr. Carrick received the award in appreciation of his impressive service and significant impact on the profession. For more than 30 years, Dr. Carrick has specialized in Chiropractic Neurology, and upheld a reputable clinic sought out by a roster of celebrity patients worldwide — including NHL star Sidney Crosby. In 2012, Dr. Carrick’s notable clinical outcomes resulted in an explosion of coverage by media, including: USA Today, The Wall Street Journal, Sports Illustrated, Maclean’s Magazine, Fox, CNN, ABC, CBC, NBC, PBS and the Discovery Channel.
Accepting the award, Dr. Carrick states, “I am honored that the F4CP has selected me as its first recipient of an award that represents the betterment of patients and the chiropractic profession.”
Greenwalt adds, “It is exhilarating to witness an F4CP supporter possess the same drive and dedication in advancing chiropractic. Together, we will change the future of this profession and impact millions of patients with our distinctive care. We extend our congratulations to Dr. Carrick, and look forward to future successes and nominations.”
About Foundation for Chiropractic Progress

A not-for-profit organization, the Foundation for Chiropractic Progress aims to inform and educate the general public about the many benefits associated with chiropractic care. To learn more about the Foundation, please visit us on the web at www.f4cp.com or call 866-901-F4CP (3427).