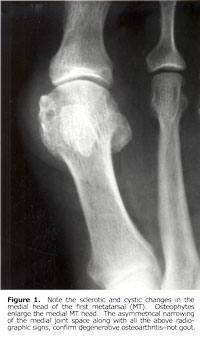 This 60-year-old male complains of sharp pain in the great toe. He has a family history of gout and is worried he has developed gout. What’s your diagnosis?

Of all forefoot articulations, the most commonly involved articulation is that of the first metatarsophalangeal joint. The radiographic signs are distinctive but, on occasion, may be identical to those seen in early gout. The most characteristic signs are osteophytes and deformity. Osteophytes are usually at the dorsal and medial surfaces of the first metatarsal head. Osteophytes are occasionally seen arising from the hallux sesamoids. Hyperostosis on the medial aspect of the metatarsal head may appear cystic and simulates the changes of gout. Clinically, this bony outgrowth gives rise to a bunion. Valgus deformity with lateral displacement of the phalanx on the metatarsal head is frequently observed. Additional signs apparent in varying degrees are asymmetrical loss of joint space, subchondral sclerosis, and small subchondral cysts (geodes).1

The ankle is an uncommon site for degenerative joint disease unless significant previous trauma has occurred. The most likely association with arthrosis of the ankle mortise is a previous tibiofibular diastasis that results in chronic joint instability. An osteophyte from the dorsal aspect of the distal talus (talar beak) often is a sign of tarsal coalition. With regard to the tarsal articulations, which are infrequently involved, only the first tarsometatarsal joint demonstrates visible radiographic changes. Degenerative changes at this articulation should arouse suspicion about the presence of a congenital talocalcaneal bar. Degenerative calcaneal spurs are common at the plantar and posterior surfaces, but are not necessarily symptomatic. These bony excrescences are well-defined and sharply marginated, in contrast to inflammatory new-bone proliferation (enthesopathy), such as in ankylosing spondylitis, psoriasis, and Reiter’s syndrome.1

Distinctively, the affected joint is swollen and hot, but dry, in contrast to other arthritides, which are usually moist. Rapid recovery within days of the attack is the rule, but recurrence may occur within a short period. A proportion of individuals will remain asymptomatic for many years. Renal uric acid calculi are encountered with increasing frequency after the onset of articular attacks.1