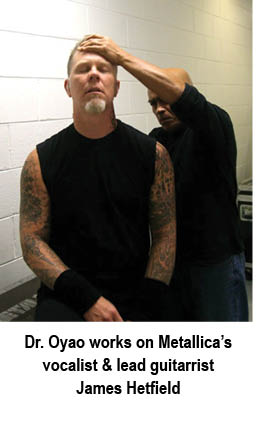 :dropcap_open:W:dropcap_close:hat do rock stars and Olympic athletes have in common? No, this isn’t the lead up to a punchline.

Both share a need or desire for chiropractic care to enhance their demanding performances. Having been a team doctor for six Olympic competitions, my latest “gig” with Metallica has shown me that intense activity, endurance and strength are sought by both kinds of performers, be it on stage in front of thousands of fans or competing for a gold medal at an Olympic event.

For the last nine years and more than one thousand tour dates, I have been providing Metallica’s band members with almost daily care.  Going on thirty years of making music and more than 100 million albums sold, Metallica’s rock and roll habits of decades ago have simply been replaced with more conservative routines, as they prepare for their two-hour-plus concerts.

Pre-concert care, deep tissue work and rub-downs between songs are just a few of what Metallica’s band members have required on the road.

Vocalist and rhythm guitarist James Hetfield has called me a voodoo doctor and bass guitarist Robert Trujillo says my treatments resemble acupressure.  I’m counted on by drummer Lars Ulrich and Kirk Hammett, who happens to be my cousin.

At the end of the day, all of the band’s members are finely tuned into the idea of how they can best prepare for demanding concerts to please their fans of many ages.

Odd as it seems, treating rock stars and competitive athletes have a lot in common.  Trujillo needs constant attention to his guitar-strumming arm and its speed-demon fingers, even between songs backstage.  Deep tissue work before shows has also become a Metallica tradition.

Metallica’s band members must individually maintain cardio-vascular endurance, an exercise and stretching regime and a balanced diet and nutrition.  With the bands’ intense concert schedule and travel itinerary, Metallica members must be at a peak performance state both physically and mentally.  Subsequently, their qualitative longevity deserves and requires preventative and maintenance healthcare on a daily basis.

To me, Metallica brings harmony to their fans as the band roams the jungle of a world filled with chaos and insanity.  Helping Metallica bring their music to the world has been my own rock and roll dream come true. It has been a privilege to work and tour around the world living in the mad, mad world of Metallica.

I’ve been a huge fan since my cousin Kirk invited me to a Metallica concert in San Francisco in the early 1980’s, not long after the band formed in 1981.

My family had always been chiropractic-oriented family and believed each of our innate abilities flourished throughout our lives whenever the life force was made to flow freely with chiropractic care. That was our gospel, and one that Metallica eventually tuned in to.

During the early 1980’s,  Metallica released hits with fast tempos and instrumentals, fast becoming well known as one of the top four thrash metal bands, alongside Anthrax, Megadeath and Slayer.  Because of their aggressive musicianship, Metallica gained a loyal fan base in an underground music community.

In 1986, Metallica’s album, Master of Puppets was described and acclaimed as one of the most influential metal thrash albums of all time.  In 1993 onward, Metallica achieved substantial commercial success with the Black Album, which debuted at number one on the Billboard 200.  With the release of the Black Album, Metallica shifted and expanded its musical direction resulting in an album that appealed to a mainstream audience.

It was Kirk who was convinced of the power of chiropractic and insisted that his spine is adjusted regularly.  His sister, Jennifer Hammett also plunged into the world of chiropractic in the 1990’s.

As an Australian/American citizen, I would meet and work with the band on a part-time basis when I lived in Australia.  It was at the time, in 2000, that Metallica released St. Anger, an album that seemed to have alienated a number of fans. Nevertheless, the band created a documentary describing and exposing the bands most inner hopes, fears and turmoils.

After given them adjustments a number of shows, by 2002, they appointed me as Metallica’s full-time touring band doctor.

The diehard Metallica fortress that had grown through nearly 30 years was becoming much more stable and solid. It didn’t
matter if fans had come and gone during the last 29 years, Metallica music had been a great source of love and support for many fans to lean on.

They have been through a lot that some fans criticized, from signing on to  a major label, to doing a ballad, to cutting their hair, to fighting Napster, as well as to create a documentary that brought on their most intimate fears to the public. Yet the Metallica fortress stood solid and unshakable.

Metallica was inducted into the Rock and Roll Hall of Fame, Cleveland, Ohio in April 2010. When they accepted the new title, it was one of the best moments of my life.

After having worked behind the scenes at concerts in cities around the country and the world, adjusting the band to keep on playing for fans, I can definitely say, it’s only rock and roll, but I like it.