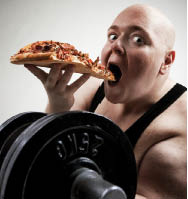 Mental state or supplements for an improved performance?

There is little evidence to support the notion that we can take nutritional supplements and improve performance or increase strength in a significant fashion. In all likelihood, the mental state of the athlete is the deciding factor. An example of this was a placebo study that involved the perceived use of anabolic steroids. Wilmore and Costill describe this study in their exercise physiology text (1). Fifteen male athletes who had been heavily involved in weight-lifting for the previous volunteered for a weight-training experiment. They were told that those who made the greatest strength gains over the preliminary 4-month training period would be selected for the second phase of study in which they would receive Dianabol.

A personal example takes me back to my high school days. I was a high jumper and my best jump was 6’2” at the time of our county championships during my senior year. At that point I was working 3 nights per week to make money so I could pay for a bike trip that coming summer. A buddy and I decided to pedal from our town in New Jersey to Daytona Beach.

The night before the county championship I bussed tables for 8 hours until after midnight and only got about 4 hours sleep, which was highly irregular for me during my intensely heavy sleeping high school years. So I show up to the event too tired to worry about my performance and fully not expecting to do well, so I was relaxed, carefree and unattached to the outcome. To my surprise, and everyone else, I jumped 6’6”, won the championship, and was told that I cleared 6’5” by at least six inches.

If they only made bottles of “relaxed, carefree, and unattached to the outcome” pills, I would likely have done much better in other high school sports and probably often shoot in the low 70’s when I play golf now.

:quoteright_open:Between games they would munch on various snacks, including soda, candy, chips, and the like.:quoteright_close:

A friend of mine helped to coach his daughter’s weekend lacrosse team. They would often play two games in a row and most of the girls on both teams were dragging by the middle of the second game. Between games they would munch on various snacks, including soda, candy, chips, and the like.

So, one season he changes the between-meal dining option to vegetables, fruit and nuts, and educates the girls and parents to similarly avoid the unhealthy elsewhere. By the third weekend, his team was plowing through the second game without fatigue, which was associated with more victories. I realize this is an anecdote, however, it is certainly worth a try and has overall health benefits that have been established.

Dyslipidemia has been associated with tendinopathy expression. For example, lipid deposition is known to occur in tendons, high cholesterol levels have been observed among individuals with Achilles tendon rupture, and the esterified fraction of cholesterol is elevated in biopsies from Achilles tendinopathy subjects (2).

In another study, anthropometric measures were determined in elite level volleyball players over the age of 18 with patella tendinopathy. Male players with a waistline of greater than 33 inches appear to at greater risk for developing tendinopathy. The authors state that the additional weight may excessively load the patella tendon and also suggest that, “as waist girth is an accurate anthropometric surrogate for abdominal adipose tissue, free fatty acids and cytokines released by abdominal adipose tissue may have a role in tendon pathology” (3).

Whether due to excess body weight or increased inflammation, or both, maintaining appropriate abdominal girth appears to be important for male volleyball players looking to avoid patella tendinopathy. The fashion in which this may apply to other sports and types of injuries is not presently known; however, this should not stop of from getting patients to maintain appropriate abdominal girth.

The best operational approach to nutrition for athletes

A diet that is rich in nutritious foods, including vegetables, fruit, nuts, lean meat, fish, tubers, and certain seeds such as chia and hemp appears to be the best option. This approach reduces inflammation and prevents cardiovascular disease and diabetes (4). Supplements that help to reduce inflammation and support metabolism include a multivitamin, magnesium, fish oil, and vitamin D (5-9). Vitamin D may be of special importance for athletic performance, especially during winter months (10).

Dr. David Seaman is a Professor of Clinical Sciences at NUHS-St Pete and is a Clinical Consultant for Anabolic Laboratories. He has written numerous articles on the treatment options for chronic pain patients, with a focus on nutritional management.

He can be reached at [email protected]

8. Simopoulos AP. The importance of the omega-6/omega-3 fatty acid ratio in cardiovascular disease and other chronic diseases. Exp Biol Med. 2008;233:674-88.