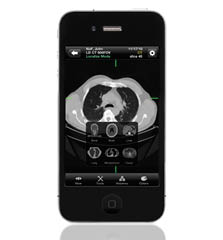 :dropcap_open:O:dropcap_close:ne might read the headline of this article and wonder if I somehow developed a miraculous iPhone App that allowed me to take digital x-ray pictures right from my phone. While that technology clearly doesn’t exist, I’ve done the next best thing: Using the digital camera on my iPhone, I’ve made my entire practice digital without owning a single piece of digital x-ray equipment.

Allow me to take a step back for a moment. Before transferring to a new location, my previous practice benefitted from having access to a complete digital x-ray system – no film, no chemicals, no storage issues. Having the ability to take x-rays and have the results in seconds, and being able to annotate those x-rays, was simply part of how I worked with my patients on a daily basis.
Once I moved to a new location, I lost access to the digital x-ray environment – and the difference was nothing short of astonishing. Can you picture going out with friends and whipping out a Polaroid camera to take a few pictures? Well, that’s what it felt like losing access to digital x-ray technology. It was like being thrown back into the dark ages!
Speaking from direct experience, I know that once you’ve gone digital, you simply cannot go back – it’s just one of those technologies where you wonder how you ever got along without it. And yet, there I was with my new practice, sans digital technology.
While this didn’t seem like a big deal at first, it quickly became a source of frustration because I had become reliant on having the ability to quickly show my patients exactly what their diagnosis was, and then being able to just as quickly illustrate where they could be with proper chiropractic treatment. Without seeing the annotations, the patients no longer had the “a-ha” moments I had become used to seeing, and instead I would take up valuable practice time having to explain everything.
As we all know, starting up a new practice is an expensive endeavor, and the cost to bring a full digital system into my practice just wasn’t realistic because I was new to the area and just getting my practice off the ground. And while costs associated with implementing a new digital x-ray system have dropped considerably, adopting a full digital system is simply beyond the scope of some practices – especially a new one. That, however, didn’t stop me from finding a digital solution for my practice.
I thought that there must be a hybrid-type solution that would allow me to bring the power of digital x-ray technology back to my practice, but without the added expense – and that’s when it hit me: Why not just take digital pictures of my film-based x-rays with my iPhone and import them into a digital x-ray software program? I also realized that once I had digital x-ray software in my practice transitioning to a full system, complete with hardware, would be that much easier.
After downloading the software (which took all of a few minutes), I was able to work just as I had in my previous practice, annotating the x-rays and using those annotations as a way to communicate with, and educate, my patients. In fact, I started using my iPad and iPhone to share the annotated x-rays with my patients (something I hadn’t even done when I was using a full digital x-ray system) and it made a huge impact on patient perception.
:dropcap_open:Why not just take digital pictures of my film-based x-rays with my iPhone and import them into a digital x-ray software program?:quoteleft_close:
While certainly not as convenient as a true, end-to-end digital x-ray system, taking pictures of x-rays with my phone and importing them into my annotation software was a snap (pun intended).  Also, the software I purchased is fully compatible with a complete hardware system, so I knew transitioning to a turnkey digital x-ray system would be much easier when the time came.
The digital x-ray software I use gives me the ability to export images to multiple formats (more on that later), and I often export the image to JPG without the annotations, and then with them – so I can “reveal” them to the patient right on the iPad. This takes literally seconds to accomplish and allows me to tell the patient’s story back to them in a powerful way, revealing the diagnosis first, and then the prognosis.

Armed with my new digital x-ray “system,” I immediately began seeing increased patient visits, and fewer missed appointments as well. The visual impact of what annotations can do for both a chiropractor’s ability to communicate problem areas with a patient, and a patient’s ability to truly “get it,” cannot be overstated. Most individuals respond to visual stimulation, and if they leave with an annotated picture in their head of what’s causing their issues (or better yet – if you give them the actual annotated picture to take home with them), they are most likely to come back for continued treatment. Please allow me to stress this point: This is not conjecture. The difference I saw leaving a chiropractic practice empowered with digital x-ray technology, and starting one without it, was striking. Once I showed a patient an annotated x-ray, I could count on them returning.

In addition to the benefits listed earlier, having the annotated images increased my capabilities as well. I was also able to mark images and save the markings on storage media. I could also store the images or burn them on DVDs or CDs to give to the patient, or send them via email. And the images could be saved in nearly any format, such as JPEG, JPEG2, GIFF, TIFF, BMP and PNG. Digital images are also easy to send over a network, and I can make as many copies as needed with no additional expense.

Patient perception is one of the most important aspects in patient care, and because I am able to communicate with them in a way that earns their trust, I’m able to better help them. It is obvious that my use of annotations, combined with illustrating those annotations on a mobile device, delivers a clear message to my patients: You are in good hands.

Since I’ve been using the iPhone and digital x-ray software in my practice, I’ve realized a significant increase in patient visits, and referrals have increased as well. This has put me in a position to now consider a transition to a full, turnkey digital system complete with x-ray generator and a flat panel. Stay tuned!

Dr. Raphael has an extensive background in science, health and wellness. He has had formal training in nutrition and wellness at the postgraduate level, as well as a deep engagement in study of leading health and wellness research. He uses digital x-ray software from ImaSight (www.ImaSightChiro.com). In addition to his full time Chiropractic Wellness practice out of Port Credit, Ontario, he also maintains his Certified Strength and Conditioning Specialist with the NSCA, and is a CrossFit L1 Trainer. He is one of twenty Paleo Physicians in all of Canada, and one of a small handfull in Ontario who is a member of the Wellness Council with the ICA.