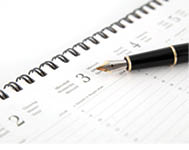 :dropcap_open:O:dropcap_close:ne subject that tends to get overlooked when it comes to the overall management of a chiropractic practice is simple appointment book control. A lot of doctors haven’t learned that there needs to be a certain rhyme and reason to every minute that is controlled by the appointment book for the practice. Because really, when it boils down to it, there’s only so much time in a day. If that time is not managed properly then it’s going to lead to frustration, distress, and ultimately, failure.

Don’t allow patients to come and go as they please. Schedule them. When you allow the patients to control your schedule, you’ll have a day like this: You’ve got four regular people that show up for their regular care, and then a new patient shows up and waits for an hour and a half to be processed because you weren’t expecting two of the four regular patients, and both the new patient, the regular patients, and the doctor just end up being stressed and frustrated. It just leads to a big break down in efficiency and stress that doesn’t need to occur.
One way to fix that would be something as simple as cluster booking. Cluster booking is essentially blocking time throughout the day where the CA, the chiropractic assistant, and/or the staff know they can’t book any new patients. That two and a half hours or hour and a half or whatever it may be is only to see patient visits for regular care.
Then there will be blocks of time where you’re only going to see report of findings. So if you need to fit in your report of findings, it helps you get into a groove. Also, you’re not bouncing around. You’re able to focus on the patients at hand. It really helps with the efficiency and the effectiveness of what you’re trying to communicate to the patients.
Here’s another point that’s often overlooked. This helps reduce missed appointments. If someone calls and cancels, are they rescheduled for the appointment that was missed? In other words, if they were on some type of care plan where they were scheduled to be seen three times that week but they call on Monday and cancel do you just say, “Okay, we’ll see you on Wednesday.” If so, you’ve just missed that appointment that was originally scheduled in the care plan. So that’s not a rescheduled, that’s just a missed appointment.
A lot of doctors think, well, I had 25 visits scheduled today and 24 of them showed, so we did pretty good. Well, if that was the case, in most chiropractic offices that’s not too bad. However, if they have 25 scheduled, had four missed appointments, and had five drop-ins there is a good indication that there is a problem with appointment book control.
Just on the missed appointments, forget the drop-ins for a moment, just on the missed appointments alone, do you know that if you have one missed appointment a day and you do that for a year’s time that’s over $10,000 you’ve lost? So when the appointment book is mismanaged, and even down to one missed appointment a day, that’s going to lead to dramatic loss of profits and productivity.
When I ask doctors how many additional patient visits they would like to be able to see in a day, effectively and efficiently, with low stress, most doctors will say somewhere around 20 more patients a day.
However, if it takes you 20 minutes to see a patient visit, 30 minutes to do a report of findings, a full hour to process a new patient, then you’re taking up the time in that day that you could be seeing additional patients. There is only so much time in a day, and if you keep running your practice in an inefficient manner, how are you ever going to squeeze 20 more people into your schedule?
Until you can better manage your schedule, the day that you’re going to squeeze 20 more people in is never going to come. Because that’s a stress point. And you cannot outgrow a stress point. It can’t be done until you address it. All of those inefficiencies lead to a “friendship practice” that so many doctors have. Friendship practices are those that allow the patients to come and go when they what to. Patients dictate the care, not the doctor. There’s no respect.
Until you learn to manage the business that you already have, you’re going to be constantly looking for new business. Think about that for a second. If we’re losing business, the very business that we’ve already spent a certain amount of money and time to get into our office, if we mismanage that, then we’re going to be seeking out new business before we really need it. Pay attention to the appointment book and determine to become more effective and efficient in your practice.