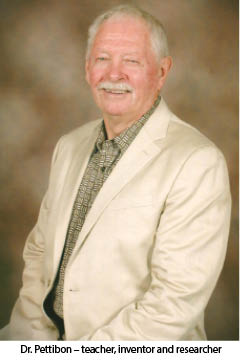 :dropcap_open:A:dropcap_close:fter receiving an honorable discharge from the U.S. Air Force Burl Pettibon attended Cleveland Chiropractic College in Kansas City, MO.  He graduated in 1956 and practiced in Tacoma Washington while developing clinics in other locations.  Dr. Pettibon was a department head for two years in the college that is now Palmer West.  He has guided The Pettibon Institute’s direction, continuing education offerings, and research since its inception as the Pettibon Spinal Bio-Mechanics Institute in 1981.

As a teacher, inventor, and researcher, Dr. Pettibon’s influence and contributions to the science of chiropractic are legendary.
Dr. Pettibon has been an extension faculty member and lecturer at Palmer College of Chiropractic for more than 35 years. He is also an extension faculty member at Life University, Logan College of Chiropractic, Parker College of Chiropractic, and Cleveland Chiropractic College, where he received his degree in 1956. Dr. Pettibon has written more than 65 papers and books on chiropractic care and research. Over the course of his career, he has developed 25 clinics. At the present time, the profession is using the more than 40 products that he has invented to make the detection and correction of vertebral displacements both easier and more accurate. He currently holds three patents and has another two pending approval.
In 1988, Dr. Pettibon received the Daniel David Palmer Chiropractic Scientific Award. In 2005, Dr. Pettibon was certified as a Fellow of the American Board of Chiropractic Specialists and inducted as a Fellow into the Royal College of Chiropractic Medicine. In April 2007, Dr. Pettibon was awarded an honorary PhD from American International University, an affiliate of the Royal College of Physicians and Surgeons of the United States of America, a sister college of the Royal College in England, which in 1645 founded what is now the world’s oldest medical educational institution.
TAC: What is it that led you to get into postural rehabilitation, versus traditional subluxation-based Chiropractic?
DR. PETTIBON: In Chiropractic College I was taught that chiropractic is a philosophy, science and art that corrects spinal deviations, the cause of neural impedances and dis-ease, rather than just treating symptoms.   I had friends that were graduate chiropractors practicing near the college and persuaded them to allow me to use their clinics and x-ray facilities to take pre and post adjustment x-rays of people.  I and several other chiropractors adjusted these people for free and took post x-rays to see our results. When we compared pre and post adjustment x-ray readings and laid them on top of each other we found that the patients’ displacement subluxations were more displaced than before we adjusted them.  We were obviously disturbed and confronted our clinic instructors at the college with our findings.
They admitted that they had never checked their results but they were not surprised or concerned.  After graduation, I took a class in the Grostic procedures from Dr. Grostic.  His post x-rays showed that he could correct upper cervical displacement subluxations.  However, I took a second and third set of post x-rays two and five days after they had been corrected.  In all instances the displacement subluxations measurements proved that the displacements had returned to their original pre adjustment positions.
This made me realize that there was much more to spinal displacement form and function than just the hard tissues involved.  Therefore, I began to read research articles published by others in the healing arts and took a closer look at physiological and neural responses to the applications of external mechanical forces applied to the spine we chiropractors call an adjustment.

TAC: How did your peers view the changes that you were making to the delivery of chiropractic?
DR. PETTIBON: I was interested in results, not being popular. It is interesting that many of my peers brought their families to me and came to me for their own care. I received hate mail and was threatened. People don’t like their religion questioned. It was not my intent to incense anyone. It was purely a quest for truth.
TAC: Was there anyone in chiropractic that was doing similar things to what you were doing when you began to adopt these new procedures?
DR. PETTIBON: There were people with questions and who were willing to look for answers, such as Roy Sweat, who took my class and later developed his own technique. I developed many relationships through the years with people who had questions. They are listed in the dedication to my latest book, which is soon to be released.
TAC: How many chiropractors are using this in the field currently?  Are only chiropractors doing it?
DR. PETTIBON: I began teaching upon request from my peers and went on to develop the Pettibon Biomechanics Institute, Inc. as a nonprofit teaching institute that has literally held classes all over the world. Myself and others have taught the Pettibon Technique initially and in the last ten years, the entire Pettibon System to approximately 6000 varied health care professionals, to include 300 Korean M.D.’s at Yonsei Medical University in Seoul, Korea as well as Russian M.D.’s in Vladivostok.
Approximately seven years ago we realized that the wave of the future will dictate that people would prefer not to travel and would prefer to learn online. We were the first technique to be approved by P.A.C.E. with the relationship continuing to this day. We are also approved online by Palmer College. We have three comprehensive programs online at this time and are launching a NEW five part series throughout Fall/Winter of 2011. They will be affordable and simple to navigate and understand, covering every possible topic a professional needs to understand how to achieve predictable and long-lasting results.
TAC: How important is it to warm up the discs and soft tissues prior to administering the adjustments you deliver?
DR. PETTIBON: Discs have viscoelastic properties, plasticity, hysteresis and they creep as they lose their hydration and height daily while under load.  The loss of disc height closes down on the IVF with the potential for causing as much or more neural impedance as any lateral or rotatory subluxation.  Further, if the disc is not rehabbed daily it and the spinal joints that are normally protected by normal disc height can become pathological.

The soft tissue component is so critical to long-term results that we pre check our patients for their ability to respond to adjusting / mobilization / manipulation before ever putting any force into the spine. If the soft tissues are weak and unresponsive our first job is to strengthen them prior to any type of manipulation / adjustment / mobilization. I am excited to introduce a new paradigm shift Fall 2011 that I believe will revolutionize how the spine is viewed and the correction of spine problems.
TAC: Where do you see the Pettibon (technique) system going in the future?
DR. PETTIBON: The Pettibon System will challenge the result-oriented practitioner to think out of the box. We will continue to educate health care practitioners in such a manner to seek answers for questions that prevent them from the results they want to deliver. We have focused on delivering the promise of chiropractic through scientific inquiry and delivery of methodologies that validate the care we provide. Our pre and post x-rays do not look alike and the patients continue to make significant gains after they are no longer under active care and are following our simple protocols the rest of their lives. I think it is important to differentiate a system from a technique.
TAC: What is the most important aspect to success in care through the Pettibon System?
DR. PETTIBON: As in all things, it is following the step-by-step process of the Pettibon System, which will give the result the patient and the clinician seek. When a patient is educated to follow in-home procedures and perform preparatory warm ups and traction before their postural evaluation they come to understand the value of participation. Success in care is only as good as the dedication of the doctor and staff. We have a proven model of success with training for implementation and clinical outcomes that are objective and documented. It is everything I went to school to learn and did not. It is the reason I got up in the morning all of those years; to solve problems I had no solutions for at the time.