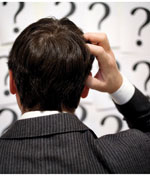 HIT. It’s a government acronym for Health Information Technology. According to onlinedictionary.com hit means to come into contact with, forcefully. Hmmm, was the government just being clever with the acronym?

Today, millions (later billions) are and will be injected into the health care economy to bring about a transition from non-electronic health records to electronic health records (EHR). There is government money to be had for the early adopters and, later, actual “punishments” for the non-adopters. This much is certain: change is coming, and it’s coming fast, mostly due to the incredibly tight time frames of the HITECH (Health Information Technology for Economic and Clinical Health) Act, a part of the “stimulus bill.”

Here’s what is still not certain: how any of this is going to work.

Regardless of what a salesman has told you, or what a seminar guru imparted to the audience, the rules are not yet written, much less approved, for what it’s going to take for you to comply in a way that results in the “thousands of dollars” available to the Doctor of Chiropractic actually making their way into your bank account.

The doctor must demonstrate “meaningful use” of a certified EHR system. That sounds simple enough, if only there were agreement and understanding as to what that statement actually means. There are thorny, unresolved issues still to be hammered out as to what is going to be required for a doctor to receive reimbursement.

The easiest part of the “meaningful use” definition to pin down is the one that does not apply to chiropractic at all, that is eprescription usage. Since chiropractors don’t prescribe drugs, there will be no need to demonstrate compliance.

The next part of “meaningful use,” as indicated in the bill, is that you must use “Quality Reporting,” utilizing a certified program. Since there is already a test program underway by Medicare, utilizing PQRI (CMS’s Physician Quality Reporting Initiative), it is likely that some form of that program will be in the mix; but, as yet, this not certain. Also uncertain is just how hard or expensive the certification process for software will be. What is certain is that NO software has yet to be certified for HITECH, because the process, itself, has not been written into final rules.

The hardest part of the set of the definition of “meaningful use” to get nailed down will be the provisions of the HITECH Act that call for sharing of health records, while protecting patients’ privacy. Most likely, there will be a standardized format for sending data to a regional warehouse, and another way to get information from the regional warehouse.

As a broad brush stroke, that sounds simple enough but, as usual, the details hold lots of unanswered questions. What data gets shared? Clinical notes and X-rays are pertinent to your management of the case, but is billing information important enough to share, too? Who get’s to see the data you’ve “shared?” Who owns/controls the data? Does the patient have access to all of its data?

Amazingly, we are rushing to implementation, with deadlines for reimbursement in 2011 to be based on performance in 2010; yet it will be spring 2010 before the rules (which won’t be released until December 2009) become finalized. That is, unless the date gets pushed back again. Perhaps one could say this is a case of HIT and run.

Between potential health care reform, and already passed HIT legislation, these are times in which a doctor of chiropractic has to be awake and aware, but must also be wise and careful not to jump too fast into solutions that are solving problems not yet defined.

Hal Calisch is the founder, president and chief software engineer of TGI Software, makers of Autumn8, a full featured office management/EMR package for chiropractors. Prior to starting TGI software in 1995, Hal spent 12 years as a consultant to chiropractors in practice management and marketing. Contact information: 1-800-645-4309, www.tgisolutions.com,  [email protected].