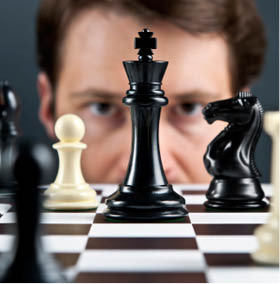 :dropcap_open:A:dropcap_close: 42-year-old male presented to the doctor’s office six weeks ago with severe low back pain radiating into his left leg after a motor vehicle accident in which his stopped car was rear-ended by a truck traveling at a high speed. He was antalgic to the left and positive for compressive syndromes via orthopedic and neurological testing. He was immediately referred out for an MRI that revealed an extruded disc with mass effect on the thecal sac central and to the left at L4/5. The patient was referred out to a neurosurgeon who confirmed conservative chiropractic care was indicated for a period of eight weeks and then a follow-up evaluation should ensue with a neurosurgeon to determine if surgery might provide a solution.

At the six-week interval, the patient received a letter from AllFarm Insurance Company stating that an IME has been ordered to determine the necessity of care. The patient showed up at the appointed time for the examination with a friend who joined him during the examination and handed the IME doctor a copy of the MRI on a disc and submitted for examination. The IME doctor spent a total of four or five minutes with the patient, which included the time he spent obtaining the history and doing a physical exam. He released the patient from the examination by walking out in front of the patient and never seeing him ambulate. Two weeks later, the patient and treating doctor received letters from the carrier stating that all future benefits were denied and three out of the six previous weeks’ benefits were denied as well. Upon request of the IME doctor’s report, the treating doctor and patient found the IME doctor stated the diagnosis as lumbar spine strain/sprain resolved.
This above scenario is a typical result that virtually every doctor has seen in his or her office multiple times over the course of our careers.
As I have stated previously and continue to firmly believe, the IME and peer review systems are an integral part of the reimbursement system. These two components help create a check and balance to prevent overutilization and only allow necessary care to be rendered to those in need based upon the contractual obligation of the third-party payer. However, as I have also contended in the past, this system has been perverted for far too long by carriers, IME companies, and IME doctors who all too often ignore the facts of the case to reach a desired conclusion. In the “real world,” most treating doctors and trial lawyers have recently reported that that it has been “almost a decade” since they have seen what would be considered a fair defense examination. Personally, this past week, I reviewed a case where, for the first time in years, I had no argument with the defense examination, even though the IME doctor disagreed with me, because he did a thorough job.
IME and peer review doctors are entitled to their opinions and I have no issue with their opinions whether I agree or not, provided all the results are being ethically considered. That is the crux of the matter and the biggest issue facing the injured and treating doctors across the nation, and has been endemic for years where the third-party evaluator does not consider all test results in either his or her conclusion or the entire report in its totality. Part of the problem is that the carrier and third-party intermediary companies (IME companies) in possession of records do not forward those records to the IME or peer review doctors, and/or the third-party doctors themselves ignore the results in front of them.
:dropcap_open:Knowing the laws and regulations of your state gives you the leverage to level the playing field should you have the evidence that the third-party doctor, the IME company, or the carrier was in possession of all of the information and the IME doctor then chose to either not report it or consider it in the report.:quoteleft_close:
Historically, in this process, doctors and patients have been both victims and willing accomplices by allowing these practices to go unchecked. Most, if not all, doctors do not realize the leverage the system offers us to level the playing field against improper or fraudulent IMEs. That leverage is found in the laws and regulations that guide and govern professional practices in every state and territory in the United States. There are laws that protect the insurance carriers from doctors who steal based upon deceit, fraud, and other illegal activities as defined by law, and the IME and peer review doctors, the IME companies, and insurance carriers have a similar set of rules and regulations to protect the insured and those delivering the care from the same.

The following are examples of three states, with the understanding that all 50 states have laws to protect the insured and providers against these egregious activities:

Based upon Georgia law governing chiropractic practice 43-9-12 (2): “Knowingly making misleading, deceptive, untrue or fraudulent representations in the practice of chiropractic or on any document connected therewith; or practiced fraud or deceit or intentionally made any false statement in obtaining a license to practice the licensed business or profession; or made a false statement or deceptive registration. The provisions of these rules applicable to a particular profession may define additional acts or omissions as unprofessional conduct and may establish exceptions to these general prohibitions ‘Willfully making or filing a false report.’”

New Jersey has a similar set of regulations and according to New Jersey regulation 13:44E-2.6 (b): “A non-attending chiropractor who performs a patient record review, which evaluates prior chiropractic care or the need for continuing care or the necessity for diagnostic testing, shall make a reasonable effort to obtain all records of the attending chiropractor relevant to the chiropractic care or condition before rendering an opinion…(h)…Violations of any of the provisions set forth in this section shall constitute professional misconduct.”

Michigan takes it a step further by making “willful improper” a felony. Michigan Penal Code 750.942a states: “A health care provider or other person, knowing that the information is misleading or inaccurate, shall not intentionally, willfully, or recklessly place or direct another to place in a patient’s medical record or chart misleading or inaccurate information regarding the diagnosis, treatment, or cause of a patient’s condition.” The law continues to state, “A health care provider who intentionally or willfully violates this subsection is guilty of a felony.”

When rebutting these reports should they not be overturned, you should put the carrier on notice that these apparent infractions will be reported to your state attorney general’s office and regardless of the disposition of this claim, you and your patient will file a complaint against the IME or peer review doctor’s license. The time has long passed where “please and thank you” rule the day. There are too many IME and peer review doctors literally making more than a million dollars because of their tactics to reach desired conclusions because they know it will lead to significantly more business for them. This is big business and because of our “historical non-willingness” to rebut these at the proper level, big business just keeps getting bigger at the expense of our patients and our practices.