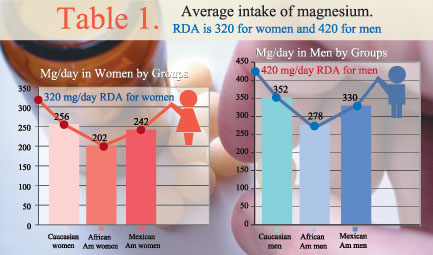 Multivitamins
Only until recently, has the use of supplements been generally accepted by the mainstream healthcare community.  Naturally, there remain pockets of resistance, and that is likely to last forever; however, we just need to recall the comments made in an article in the Journal of the American Medical Association last year:1

“In the absence of specific predisposing conditions, a usual North American diet is sufficient to prevent overt vitamin deficiency diseases….  However, insufficient vitamin intake is apparently a cause of chronic diseases….  A large proportion of the general population is apparently at increased risk for this reason….  Most people do not consume an optimal amount of all vitamins by diet alone….  We recommend that all adults take a multivitamin daily.”

Bruce Ames, a famous researcher at the University of California at Berkeley, tells us that a deficiency in even one vitamin/mineral, including folic acid, vitamin B12, vitamin B6, niacin, vitamin C, vitamin E, iron, or zinc, is capable of mimicking the cellular damage caused by ionizing radiation, and that we should compare vitamin/mineral deficiencies to radiation damage to gain perspective on how crucial it is to ensure adequate nutrient intake.2  Ames tells us that remedying such deficiencies with supplementation should lead to a major improvement in health and an increase in longevity at a low cost.

In August of 2003, a study on multivitamin supplementation was published in the Journal of Nutrition.3   Researchers examined the relationship between multivitamin intake and myocardial infarction (MI) in adults living in Sweden, a country in which fruit and vegetable consumption is relatively low and foods are not fortified with folic acid.  The study found multivitamin supplementation is inversely associated with MI risk in men and women, and this is after healthy lifestyle habits were taken into consideration.

Multivitamin supplements are extremely reasonable.  All of our patients should be taking them.  Who knows what nasty disease we may prevent by making this simple healthy addition to our diet?  As people are often very resistant to changing their diets, adding a multi can act as an intermediate step, offering health protection, while patients struggle to get their diets in order.

Magnesium
In the January 29, 2003, issue of TAC, I wrote an article about magnesium and its many benefits for our patients.  Consider briefly that magnesium adequacy can help prevent the development of many diseases, including osteoporosis, muscle dysfunction, depression, apathy, cardiac arrythmias, hypertension, atherosclerosis, and even stress and aging.

A recent study examined magnesium intake among white, black, and Mexican males and females. The results are quite shocking.  (see Table 1)

It should not be a surprise to any of us that we suffer from diseases related to magnesium deficiency.  The majority of our population is likely to be deficient in magnesium.  Fortunately, magnesium supplements are reasonably priced and, therefore, remediation is quite easy to realize. TAC

Dr. Seaman is the Clinical Chiropractic Consultant for Anabolic Laboratories, one of the first supplement manufacturers to service the chiropractic profession.  He is on the faculty of Palmer College of Chiropractic Florida and on the postgraduate faculties of several other chiropractic colleges, providing nutrition seminars that focus on the needs of the chiropractic patient.  Dr. Seaman believes that chiropractors should be thinking like chiropractors, while providing nutritional recommendations.  Doctors and patients who follow his programs report improved feelings of well-being, weight loss, dramatic increases in energy, and significant pain reduction.
Dr. Seaman can be reached by e-mail at [email protected].