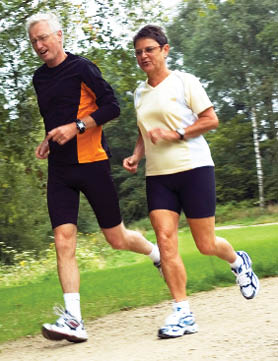 A 33-year-old female presents with ongoing pain and discomfort in her left lower leg, which responds only temporarily to anti-inflammatory medications. She has been running regularly for the past six months, but develops left leg pain whenever she tries to increase her mileage. She ices her leg for fifteen minutes after each run, and performs stretches before and after she runs. She has tried wearing off-the-shelf shoe inserts to lessen the impact of heel-strike shock to her feet, but feels that they offered little protection. She describes her current level of leg pain as usually around 40mm on a Visual Analog Scale.

Vitals. This physically active woman has taken up running in order to help control her weight. She has managed to lose about fifteen pounds over the past six months and now weighs 138 lbs, which, at 5’6’’, results in a BMI of 23; she is no longer overweight. She does not smoke and does not drink alcohol, and her blood pressure and pulse rate are both at the lower end of the normal range.

Posture and gait. Standing postural evaluation finds a lower iliac crest on the left, and a low left greater trochanter. The right shoulder is slightly lower than the left, with no history of fracture or surgery. The spinal curves are intact. She has substantial calcaneal eversion and hyperpronation on the left side, with a moderate outward flare of her left foot. The left medial arch is significantly lower than the right when standing, but it is not tender to direct pressure.

Chiropractic evaluation. Palpation finds the left posterior tibialis muscle to be tight, tender and ropey, with the tenderness concentrated in the lower part of the muscle and extending into the tendon at the medial ankle. Pain is elicited when providing manual resistance to isometric contraction of the posterior tibialis muscle. There is also moderate tenderness in the right sacroiliac joint, and segmental dysfunction is found at the L4/L5 level on the left. Lumbar, knee, and ankle ranges of motion are full and pain-free, and circulatory and neurological tests are negative.

Upright, weight-bearing X-rays of the lumbar spine and pelvis confirm a discrepancy in femur head heights, with the left side 7mm lower. A slight left convex lumbar curvature (5°) is noted, and both the sacral base and the iliac crest are lower on the left. The sacral base angle and measured lumbar lordosis are within normal limits.

Posteromedial shin splints caused by tibialis posterior tendinitis and excessive pronation. This is associated with calcaneal eversion and complete loss of the medial longitudinal arch on the left side. These lower extremity asymmetries result in a functional left short leg, which is being aggravated by her attempts to increase her running mileage.

Adjustments. Specific chiropractic adjustments for the lower extremities and the involved spinal regions were provided as needed. Transverse friction was applied to the tibialis posterior tendon to increase local circulation and stimulate collagen repair.

Support. Custom-made, flexible stabilizing orthotics were provided to support the left medial arch and decrease the asymmetrical stress on the tibialis posterior tendon and muscle. This included a varus wedge pronation correction for her left calcaneal eversion.

Rehabilitation. Dynamic resistance exercises for the left posterior tibialis muscle were performed daily, using exercise tubing. She continued her current running program, and was able to introduce a graduated increase in her training distance after four weeks of care.

She responded well to the spinal and extremity adjustments, and reported a rapid improvement with the friction massage and exercise. Within two weeks of receiving her orthotics, she returned to her progressive training program. She gradually increased her running mileage, with no return of her previous leg symptoms. She was released to a self-directed maintenance program after a total of ten treatment sessions over two months.

Pain in the posteromedial aspect of the lower leg is a variant type of shin splints that is frequently associated with excessive pronation of the foot and ankle. Her previous use of generic shock-absorbing insoles had provided little benefit, since she required specific, customized support for her calcaneus and medial arch.

Dr. John J. Danchik is the seventh inductee to the American Chiropractic Association Sports Hall of Fame. He is the current chairperson of the United States Olympic Committee’s Chiropractic Selection Program and lectures extensively in the United States and abroad on current trends in sports chiropractic and rehabilitation. Dr. Danchik is an associate editor of the Journal of the Neuromusculoskeletal System. He can be reached by e-mail at [email protected]