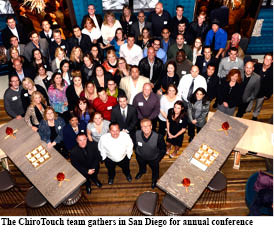 :dropcap_open:R:dropcap_close:on walks through his department, musing at the firmly presented evidence of new plans and projects displayed on a large wall-mounted flat screen TV. At ChiroTouch, it’s all about transparency. Every employee must be able to quickly tour the office and gain a firm grasp of the latest projects.  In this way, they all stay connected. His team is responsible for helping him fortify yesterday’s foundation, and pioneer the next step in the never-ending quest for innovation.

He unlocks his office door and casually flicks on the lights. The scene has changed over the years – from a small computer in his home, to a desk in a one-room office, to one in a large suite fit to support a full-fledged company, to this room; where a wraparound desk holds his various technologies, and plaques of accomplishment adorn the walls. Success is palpable in the halls around him as the buzz of activity continues to build. The rise of ChiroTouch has gained momentum, but for Ron the objective is the same: to make an outstanding piece of software.
One room to the right of Ron’s decorated office, his cohort Robert Moberg stands at the head of a large conference table behind a glass wall. He references a large monitor that displays one of his highly intricate spreadsheets (for which he is well-known throughout the company’s many diverse departments) and discusses the numbers as they relate to current happenings and far-reaching future plans.
“And what do we do, in all that we do?” he asks his team, pausing with an encouraging smirk, “We consistently try to find ways to make it work, or make it better.”   He instills this value into every employee, helping them find their own strengths, harness their individual creativity, and apply themselves ceaselessly to  each and every new challenge.
As Co-founder, Developer, and Chief Technology Officer of Integrated Practice Solutions, Ron McNeill established ChiroTouch through hard work, perseverance, and sometimes just plain stubbornness. The grassroots foundation was born in 1999 out of a single chiropractic provider’s request for an interface that would allow him to search through his patients by name. From this small application grew a full practice management solution unlike anything the chiropractic market had seen. Ron harnessed cutting-edge technology to build a solution that streamlined provider processes with touch screen interfaces, barcode and fingerprint scanner integration, and streamlined patient flow management. As a direct result of the heartfelt effort and continued innovations he’s instituted within the software, including industry-exclusive offerings of iPad integration and mobile phone patient communication portals, ChiroTouch has grown over time to become the industry standard for the chiropractic market.
But not all of this success came without its hard times, which are evidenced in the stories he is prodded to recant at every yearly meeting to help new employees understand the heart of the company. It’s an important initiation for newcomers, and a reminder for others that they must understand, at a very personal level, the special endeavor in which they’ve been invited to participate.
Success also did not come overnight, and for the first 5 years, providers were hesitant to adopt a new system within their practice which meant ChiroTouch users were few and far in between. But even throughout a barely-climbing client count, Ron forged ahead. He queried his users for input, provided them with tireless support, and diligently stationed himself at every trade show. Now one of the largest booths in attendance, ChiroTouch was once nothing more than a small table, one chair, and one man with a lot of drive and perseverance. And from those experiences, he now reminds his staff that it’s important to respect every player within the industry.
“When you go to a tradeshow, watch for the little guy in the corner and realize that he may not look like much. But I was once that little guy in the corner, and now look around you at what we’ve built.”
In 2004, Ron partnered with his then-client, a well-respected Seattle chiropractor, Dr. Michael Failla. Under Dr. Failla’s charismatic and enthusiastic watch, ChiroTouch began to find its way into chiropractic offices across the country. Dr. Failla’s own testimony and particular empathy with the challenges of running a high-volume practice helped him encourage his fellow peers to decrease their practice expenses, increase their efficiency, and get back to the most important part of running their practice—treating their patients.
By 2008, ChiroTouch was ready to start breaking ground at a faster pace. Recruited for his strong business acumen and prowess, Robert Moberg took the helm of company operations in June of 2008, and steered the ship towards a goal that would make ChiroTouch more than just a provider solution. It would become a comprehensive chiropractic resource.