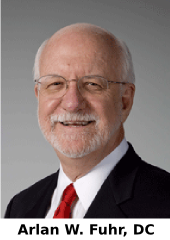 May 21st, 2012 (PHOENIX) – Activator® Methods International, developer of the only instrument adjusting technique and Activator Adjusting Instruments with clinical trials to support their efficacy, is pleased to announce it’s Co-founder, Dr. Arlan Fuhr, has been named as a Delegate to the World Health Organization (WHO) Annual Conference in Geneva, Switzerland, which will take place in May, 2012.

“I am honored to have the opportunity to represent chiropractic to the World Health Organization,” commented Dr. Fuhr, CEO and Co-Founder of Activator Methods International, and recipient of the prestigious World Federation of Chiropractic’s Honour Award. “I’ve been in the fortunate position to work with and train thousands of chiropractors in the effort to make a real, positive impact on the lives of people suffering with pain around the world, and I look very forward to representing the chiropractic community at this year’s conference.”

The Sixty-fifth session of the World Health Assembly will take place in Geneva during 21–26 May 2012. At this session, the Health Assembly will discuss a number of public health issues such as universal health coverage, Millennium Development Goals, non-communicable diseases, mental disorders, nutrition and adolescent pregnancy.

WHO is the directing and coordinating authority for health within the United Nations system. It is responsible for providing leadership on global health matters, shaping the health research agenda, setting norms and standards, articulating evidence-based policy options, providing technical support to countries and monitoring and assessing health trends.

Educating chiropractors across the world on the benefits of low-force chiropractic adjustments, Dr. Fuhr’s speaking engagements have included stops in Mexico, Canada, Australia, Japan, New Zealand, Ireland, the United Kingdom, Taiwan and China. He is credited with 25 peer-reviewed publications, 13 domestic patents, 47 worldwide trademarks and more than 100 copyrighted works. In 2008, Dr. Fuhr published the second edition of the technique textbook, The Activator Method, globally known as the standard reference for instrument adjusting.

“All of us at Activator Methods are thrilled to have yet another opportunity in which we can serve our profession,” added Dr. Fuhr.

The Activator Method Chiropractic Technique®, developed 45 years ago by Phoenix-based Activator Methods International, has become the second most-widely used chiropractic technique, and is in use daily by 70 percent of all chiropractors. Today, the technique is taught in nearly every college in the United States and abroad, and in professional seminars throughout the year. Visit www.activator.com to learn more, sign up for seminars provided worldwide, or request the Activator Adjusting Instrument.