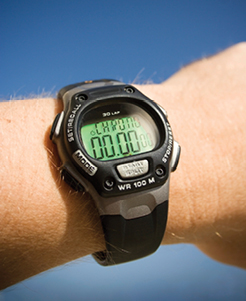 :dropcap_open:W:dropcap_close:hat is the minimal time per session for successful traction/decompression? Do we need to deliver 15-plus minutes of mechanical traction to have a clinically important outcome…could we instead use just 1-3 minutes and have a similar clinical result?

Over the last sixty years the application of traction (to create decompression) has been perceived as a time-dependant therapy, i.e. the minimal effective dose tends to be seen as durational, or time-dependant. Like manipulation, massage and other passive interventions, several sessions (of whatever duration used) are probably necessary to be most effective and most studies suggest from 3-12 sessions. However, how long those sessions need to be is perhaps open to debate and this article is simply a discussion of that possibility. Few if any research studies have undertaken a minimum-dose control.

Interestingly, the CPT have never imposed a time frame to traction application. 97012, unlike every other modality traction, has no minimal time. If it lasts twelve hours or twelve seconds it’s the same price. And the reimbursement hovers around $12-16.00 nationally, substantial for two minutes, paltry at thirty.

When we examine the research of traction comparisons of session-duration, we find it has never been undertaken with any sense of precision or focus. With the myriad of disagreements it appears that everyone tends to be in agreement that traction must be done over a relatively extended time frame, at least 20 minutes (often up to 45 minutes). Initially “hospital traction” was done for days or weeks at a time; however, that was the era of seven days of post partum bed rest as well. In a 1996 study by Shealy et al., albeit biased on the nascent DRS system (which eventually spawned the infamous DRX9000), they conclude: “sessions less than 45 minutes tended to give inconsistent results.” Having treated hundreds of patients on a DRS I found that suggestion dubious. Quite the contrary, as patients approached 45-minute sessions (typically at 50% bodyweight plus 10-20 pounds) iatrogenic pain and dysfunction followed almost linearly. Often, sessions would need to be skipped due to an increase of pain.

It is no coincidence that the more expensive the decompression system the longer the manufacturer suggested the sessions last. Leasing a $50,000-125,000.00 system required a defined patient management solution: high patient cost and elongated sessions.

Recently published trials tend to follow a “new” standard approach of approximately 10-15 minutes (the observation that 45 minutes was a necessity was not compelling to those actually using the units). An ongoing University of Colorado study involving 140 patients is also following these shorter parameters. This in my estimation is a good thing; as the old saying goes: “Tradition is what you rely on when time, money and new ideas are unavailable.” Anyone having suffered through a HNP or similar disc-related pain can attest that the traction cure can sometimes be worse than the disease. Many times when trying to arise after having been treated for 30 minutes on either our VAX-D or DRS I questioned the wisdom of lying for that long. I ignored the suggestion in those early years from many patients that less would be preferred (I refused to lose faith in the non-clinicians who sold me the magic machine and admonished me to stick with the program).

When we examine the how and why of axial traction we are faced with several ineffable physiological and anatomical considerations. Why can’t the disc react to unloading in just 1-3 minutes with a substantive, clinically relevant benefit?  Since we have no definitive answers we’re left with speculation (and future research), but clinical experience can give us some insight. Presently clinicians practicing the Kennedy Technique have been observing patient responses to very short duration sessions and the preliminary results are not disappointing (unless you really love keeping patients on your table).

What can’t be ignored is the fact that many traction studies often show little real benefit anyway, and often show more negative reactions than other modalities. Clearly too much force and too much time could be the culprits. As to the pain-gate relief achieved with any joint ‘motion’ therapy the durational component may not be ultimately important.

Anatomically, decompression is osmosis, i.e. fluid moving from high pressure to low pressure through a semi-permeable membrane. Changes in gravitational stress alter fluid inflow, assuming the proteoglycans matrix of the nucleus is intact (not degenerative). Any recumbent posture begins the process (both hyper-extension and flexion decompress the disc and restore height).

The process is potentially expedited dramatically with the addition of (dis)traction. Flexion tends to raise intradiscal pressure, linear distraction reduces it. Less forced flexion and more distraction leads to the most mechanically feasible means of rapid reduction of IDP. However, a decreased IDP then leads to an increased osmosis and fluid in-flow pressure, especially after arising.

This begs the question: Where does the fluid diffused via osmosis go once it has entered the nucleus? Doesn’t it then in fact act as an annular-distender, pressurizing the damage zone and increasing pain when upright? It would seem the negative IDP of the initial few traction pulls would achieve this effect, with further pulls possibly being superfluous.

This is the confusion of traction. Wouldn’t it be more reasonable to distract the spine once or twice (for 45-60 seconds) and release, then arise? We speculate that collagenazation and movement of nutrients occurs during decompression (and this is likely true). What actually happens internal in the disc is only speculative. Bogduk has maintained that any elongation is lost within 20 minutes after arising and thus the effect from traction must be a “phasic phenomena”, i.e. momentary and not from any resultant effect post (though the tissues and the CNS may continue to react over time, enhancing the initial benefit as well).

The relevant clinical question is whether these effects occur immediately and need not require redundant application over 10-20 minutes. I’ll keep you posted as to any new findings, but as for now we suggest (like the SAID principal): Use the lowest time/force necessary to achieve an effect (“first do no harm”), further imposition of time and force may be unnecessary or possibly, in some cases, detrimental.

Kennedy is a 1987 graduate of Palmer Chiropractic College and maintains a full time practice in western Pennsylvaina. He is the principal developer of the Kennedy Decompression Technique. Dr. Kennedy teaches his non-machine specific technique to practitioners who want to learn clinical expertise required to apply this increasingly mainstream therapy.

Kennedy Decompression Technique Seminars are approved for CE through various Chiropractic Colleges.  The author can be contacted @ [email protected]