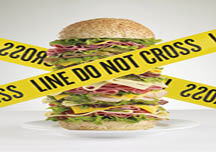 :dropcap_open:O:dropcap_close:besity is most often identified with diets high in fat and sugar, combined with a lack of physical activity. It’s not as easily accepted that obesity may be directly related to addiction. The obvious pound-packing obesity culprits tend to be high amounts of trans-fats, refined carbohydrates and white sugar. While high doses of fat and sugar trigger dopamine in the brain and become addictive, it’s the unnoticed ingredients in these foods (and even in some branded “healthy” foods) that are most likely fueling a desire for and even addiction to these foods. Yes, Americans are unknowingly addicted.

The purpose of this article is to expose the truth about how processed foods are driving cravings and causing obesity in our country. The shocking, yet inspiring, truth with obese patients is that it’s not their fault.  How can this be?

:dropcap_open:The purpose of this article is to expose the truth about how processed foods are driving cravings and causing obesity in our country.:quoteleft_close:

Let’s take a common American staple, diet soda. How many thin people do you really see drinking diet soda? Not many! Is it because they “cheat” in other areas, thinking that they make up for it with the diet soda? Maybe. I position that it’s mainly due to one very insidious ingredient in diet soda: aspartame, now also known as neotame. According to Dr. Roberts of St. Mary’s Hospital and Good Samaritan Hospital in Florida, “The habitual consumption of diet products containing the chemical aspartame not only risks aspartame disease but, also, clinical addiction. Thirty-three (5.6 percent) of 540 aspartame reactors in the author’s recent series found it difficult or impossible to discontinue them because of severe withdrawal effects.”1 People are craving diet soda for a very real and very dangerous reason, aspartame.

Another common food additive is MSG. While the holistic medical community recognizes the dangers of MSG to the brain, the direct link between MSG affecting the hypothalamus resulting in weight gain is often overlooked. In his book, Excitotoxins, Dr. Russell Blaylock directly relates MSG consumption with increasing obesity. “Early exposure in life to high doses of glutamate, or the other excitotoxins, could theoretically produce a whole array of disorders much later in life, such as obesity, impaired growth, endocrine problems….”

Not only does the presence of these chemicals contribute to obesity, the simple lack of living nutrition in our food physiologically changes metabolism and hunger. The more a person deprives their body of vitamins and minerals, the more cravings they will experience. For example, eating a bowl of strawberries tastes great! But, after a certain point, a person will feel full. The strawberries eventually won’t taste as good as the first bite, and a person would put the bowl down and be done. A nutrient deficient food, such as highly processed potato chips, would not trigger the same feeling of satisfaction and “doneness”. Take the Lay’s slogan for example, “Betcha can’t eat just one!” I bet you can’t either! There’s a reason for that.

Fresh fruits and vegetables lower the levels of ghrelin in the stomach (a hormone that triggers hunger). Junk foods, on the other hand, increase this hormone causing more cravings, hunger, and less satisfying fullness after meals.3

So, not only are the additives in processed foods causing cravings in unaware consumers, the lack of nutrition in the food, itself, causes our body to ask for more and more, louder and louder, asking for real, whole foods!

What is the unifying link between these little known obesity contributors? It’s the “brain’s brain”, the “master and commander,” or the hypothalamus (also referred to as diencephalon). Well known functions of the hypothalamus include regulation of body temperature, hunger, thirst, sexual behavior, reproduction and even emotional response. The regulation of hunger is often what determines weight in the typical overweight person. According to Dr. Simeons, “It has long been known that the destruction of the diencephalic center produces a voracious appetite and a rapid gain in weight in animals which never get fat spontaneously.”

Dr. ATW Simeons researched the role of the hypothalamus in obesity and concluded the following: “If obesity is always due to one very specific diencephalic deficiency, it follows that the only way to cure it is to correct this deficiency.”4 A person needs to simply balance the hypothalamus.

:dropcap_open:The first and most important step is to avoid dangerous food additives.:quoteleft_close:

How in the world does one go about balancing this very specific part of the brain? The first and most important step, as prefaced above, is to avoid dangerous food additives. “It is important to emphasize that there is ample experimental evidence that glutamate and aspartame both affect the neurological development of the hypothalamus. This can result in permanent alteration of the anatomy, as well as the function, of this most important brain organ.” Another study by Pizzi quoted in Blaylock’s book states, “Again, they found that the mice exposed to MSG were obese…similar findings have been seen in all other species of animals tested, which means that the toxic effect of MSG….is not a peculiarity of mice or rats.2

The second crucial element in balancing the hypothalamus is to eat plenty of organic, nutritious, whole foods. First, reduce the toxic load from additives, preservatives and pesticides. Second, FLOOD the body with what it needs to repair itself. A dietary deficiency cannot be corrected with drugs, nor should doctors even be made to try something so ludicrous.  Only the missing nutrients, of which the lack caused the disease in the first place, can bring about optimal healing.  “The body will make do with what it has to work with. If your body is starving nutritionally by a lack of essential vitamins and minerals, what will the new cells be made of?”5

Let your patients know it’s not their fault! Help them balance and heal their brain and, in turn, heal their body.

4. Simeons, ATW. Pounds and Inches, A New Approach to Obesity.  Retrieved from  http://www.hcginfoonline.com/ORIGINAL_Dr_Simeons_Pounds_and_Inches.htm