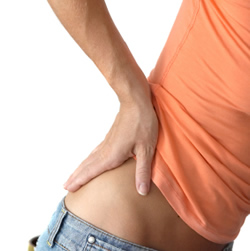 A 37-year-old female describes a history of occasional pain in her lower back region, most noticeable on the left side.  She states that her low back pain “just seems to come and go,” with no obvious triggering activities.  Her pain is localized to the posterior hip region, and does not extend below the pelvis.  She is a recreational runner who usually enjoys hiking, snowboarding, and occasional soccer games with friends, but she denies any specific injury or trauma to her lower back.  On a 100mm Visual Analog Scale, she rates the pain in her lower back and pelvic region as varying from 30mm to 50mm.  She takes over-the-counter NSAID’s when the pain in her lower back interferes with her daily activities or her job duties as the manager of the local library.

Vitals.  This active female weighs 162 lbs. which, at 5’10’’, results in a BMI of 23—she is not overweight or obese.  She reports that she works out regularly on the resistance machines at a local exercise center, and runs at least twelve miles each week.  She is a non-smoker, drinks wine moderately, and her blood pressure and pulse rate are within normal ranges (BP: 118/76 mmHg; pulse rate: 64 bpm).

Posture and gait.  Standing postural evaluation finds evidence of a lower iliac crest on the right, but the greater trochanters are level.  The left ilium is rotated forward, with prominence of the left ASIS.  Her knees and ankles are well aligned, but there is obvious medial bowing of both Achilles tendons, with pes planus and hyperpronation bilaterally.  During gait, both feet demonstrate a moderate toe-out.  Inspection of her shoes finds scuffing and wearing at the lateral aspect of both heels.

Chiropractic evaluation.  Motion palpation identifies limitations in segmental motion at the left SI joint, with localized tenderness.  The left SI joint demonstrates loss of end range mobility, and pain is reported during motion testing.  Gaenslen’s and Yeoman’s tests for SI joint dysfunction both cause increased pain when performed on the left side.  Lumbar ranges of motion are within expected norms, and neurologic testing is negative for sensory, motor, and reflexive disorders.

A lumbopelvic series (AP and lateral lumbopelvic views) is taken in the upright position during relaxed standing.  The sacral base angle is 38° and the lumbar lordosis measures 46°.  There is no significant discrepancy in femur head or iliac crest heights, and no lateral listing or lateral curvature is noted.

Adjustments.  Specific chiropractic adjustments for the lumbosacral and sacroiliac joints were provided as needed.  Side-posture adjustments were well-tolerated and resulted in good articular releases.

Support.  She was fitted with custom-made, flexible stabilizing orthotics, based on foot imaging in mid-stance.  The inserts were designed to provide support for her arches and decrease the biomechanical stress on her pelvis and sacroiliac joints during the entire gait cycle.

Rehabilitation.  She was instructed in a daily core strengthening program at home using elastic exercise tubing.  The focus was on activation of her transverse abdominis musculature, for improved spinal-pelvic stability.

This patient responded well to her spinal adjustments, and she adapted very quickly to her orthotics.  She performed her daily home exercise program regularly, and demonstrated good exercise performance at her weekly rehab review sessions.  After eight weeks of adjustments (twelve visits) and daily home exercises, she was released to a self-directed maintenance program.

This patient had a chronic pelvic misalignment, which was associated with pronation and biomechanical dysfunction in the lower extremities.  Her chiropractic treatment plan included orthotics to support her strained lower extremities, and specific exercises to improve her core pelvic stability.  She responded well to her adjustments, but also needed support from the orthotics and professional guidance for her corrective exercises.

Dr. John J. Danchik is the seventh inductee to the American Chiropractic Association Sports Hall of Fame.  He is the current chairperson of the United States Olympic Committee’s Chiropractic Selection Program and lectures extensively in the United States and abroad on current trends in sports chiropractic and rehabilitation.  Dr. Danchik is an associate editor of the Journal of the Neuromusculoskeletal System.  He can be reached by e-mail at [email protected].