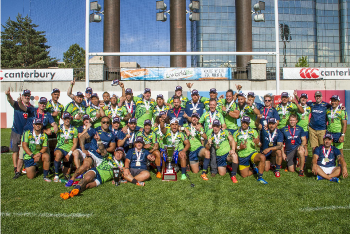 The team from Life Chiropractic College West is comprised of chiropractic students, some on scholarship and players from the local community. The team went undefeated all season with a record of 23 wins and zero losses. Their toughest encounter was against Tempe Old Devils in the National Championship Semifinal two weeks prior. In the final led by MVP Nili Latu, the Gladiators forwards laid a challenge from the opening kickoff with their powerful defense. Life West scored first when standout openside flanker Akuila Uaisele scored a try after three minutes of play.
After some bruising defense by the Life West forward pack, in particular 6th quarter student, John-Austin Colvill, the Gladiators turned the ball over and Mose Fualaau scored close to the posts. This took the Gladiators to a 14-0 lead before Wisconsin dug deep to make a game of it by leading 17-14 with ten minutes left in the first stanza.
Under pressure, this champion team took the game to another level. The green juggernaut kicked into action and the Gladiators scored another five tries.
The conditioning of the players was evident and according to Head Coach, Adriaan Ferris, the regular chiropractic care made a huge difference. He said, “We only had one major injury all season so it is clear that our strength and conditioning program, along with regular chiropractic adjustments made the difference in the end.”

Along with regular chiropractic care, Life West really pushed boundaries with their professional outlook in preparing for this year’s National Championship title run. Partnering with Standard Process, Life West provided a customized nutritional program for each player that facilitated change in players’ approach to how they prepared for rugby. In addition, Foot Levelers came on board to ensure all players had the orthotic support to help with their biomechanics that they needed.
Additional training nights, regular video analysis and one-on-one player training sessions helped shape the team into champions.
Rugby and chiropractic have a long history in the United States with Palmer College and Life University being traditional powerhouse programs. Now there is a newcomer to the table. This is a program that combines the very best chiropractic care, a professional focus and the pursuit of excellence that Life Chiropractic College West is known for. Through the vision of Life West President, Dr. Brian Kelly, the rugby program is gaining tremendous momentum. Two successive division finals in consecutive years, Life West Gladiators have become the talk of USA Rugby. With the women’s team now officially started; there are only good things ahead for this young program. The best is yet to come.
For information about rugby scholarships or to support the program, please contact www.lifewestrugby.com.