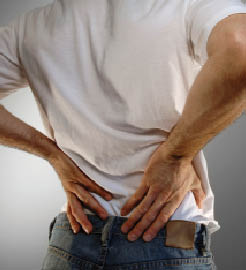 It’s an open secret that word-of-mouth referrals from satisfied patients are the primary source of new patients for most physicians. In many instances, patients refer others with similar conditions to their own.  And far and away the number one reason patients see a Chiropractor is for pain.

Consequently, it is incumbent upon the practitioner to do whatever he can to ease the patient’s suffering as quickly as possible while at the same time correcting the cause of his/her misery.  Unfortunately, this is not always easily accomplished because there are some people, a small % of ones practice, who are in such intractable pain that nothing seems to help. Visit after visit they complain that they’re not feeling any better, or that they simply haven’t “turned the corner” in their recovery.  Naturally this can be quite frustrating for both patient and doctor.

In a case such as this, the temptation to release or refer the patient prematurely is a common pitfall.  Or the sufferer may just stop care altogether on their own. This can be very discouraging for the parties concerned and, understandably, can wreak havoc on the doctor’s referral network.  Moreover, his/her reputation as a healer could suffer as well, since people with poor results have little reason to refer others.

If just one intractable pain victim can be saved each month by cryotherapy, then that’s one less “hopeless” case we’ve lost and one more satisfied patient we’ve gained!  Furthermore, once the sufferer of persistent pain can see “light at the end of the tunnel” their hopes are raised accordingly and they are likely to hang around long enough for Chiropractic to correct the underlying cause of their condition. It’s a “moment of truth” for both patient and doctor.

Whenever soft tissue trauma occurs it results in inflammation, (also infections cause inflammations), which is characterized by HEAT, REDNESS, SWELLING, and PAIN. These are also known as the CARDINAL SIGNS of inflammation, which   can often cause circulatory stasis and loss of function.  Ironically, because these 4 cardinal signs always occur together, they cannot exist alone. The removal of one, removes the OTHER 3 signs.

So, if we remove the heat, the swelling, redness, then the pain will all disappear together. Then the logical way to reduce heat is by absorbing the calories out by the use of cold therapy in an effective, safe, convenient, low cost manner. The degree of intensity of the four cardinal signs of inflammation is directly in proportion to the severity of the injury.  Thus, the more severe the injury, the more calories must be absorbed by the cold therapy to reduce the pain. When tissue is cooled, there is a contraction of fluid volume. Thereby relieving the pain caused by the pressure that the swelling exerts on the nerve endings¹.

In addition to its analgesic effects, LTCT also speeds up healing.  Since cold applications always, (not just sometimes) reduces fluid volume it can help with phagocytic activity.  Boyds’ Pathology states that macrophages and leucocytes (phagocytes) travel along fibrin pathways, but cannot “swim” in fluids between the fibrin².  It would seem that with reduction of fluid, between the fibrin network, phagocytic activity could cover the entire injured area in less time, and assist in a speedier recovery.

The BIG FEAR that Drs. and patients have is the possibility of frostbite occurring when using Cryotherapy.  Using ice and water in an ice pack is absolutely safe, because it reduces skin temperature automatically to only 34º or above.  It maintains a temperature range between 34º-40º, until all the ice melts regardless how long it’s applied.  Therefore, ice and water cannot lower skin temperature below 32º.

A patient may say, “Well if I place a towel under the gel pack, won’t that be all right, Doc”?  Then that defeats the ability to penetrate deep into the body, because the towel insulates the gel. Especially, since gel packs last for less than 20 minutes and have no circulation within the pack. When the gel adjacent to the towel and the skin warms up, it becomes ineffective to cool any longer.  LTCT, using ice and water, takes temperatures down to ideal therapeutic levels and can be used for hours (not minutes, which are ineffective) to produce remarkable results.

HOW LONG SHOULD LTCT BE APPLIED?

Most D.C.’s were taught in college the prevailing theory that ice should not be applied for more than 20 minutes to a strain, sprain injuries or to inflammations. Yet in dealing with intransigent or deep spinal pain, I have found that the results of such a brief session to be much less than the “Alpha and Omega” of cryotherapy effectiveness.

It has been my experience that the successful resolution of serious pain requires the application of ice therapy for hours, rather than minutes, to penetrate deep into the spine. So, when LTCT is applied for hours, it works amazingly well. The Magic occurs when the cryotherapy time is increased to the dictates of the intensity of the pain!  The more entrenched and severe the pain, the longer the ice therapy needs to be applied. Thus the acronym, “Long Term Cryo-Therapy” was coined, (LTCT).

A good example of deep pain (2-3″) is when an intervertebral disc (IVD) bulges and compresses a spinal nerve root (SNR).  Injury to the IVD generates heat by traumatic friction, resulting in inflammation (often called a Hot Disc), which in turn increases the internal pressure of the IVD.  e.g. – increase the temperature of an automobile tire and the internal pressure (turgor) of the tire will increase several lbs.

In light of this, when LTCT reduces the temperature inside the disc (nucleus pulposus [NP]) and subsequently contracts it, this then reduces the internal turgor of the IVD, thereby removing some pressure off the SNR.  Pain is relieved proportionately to the amount of LTCT that is applied, and the amount of contraction it produces.

WHY LTCT IS MOST EFFECTIVE;

Keeping in mind, that the IVD is 2-3 inches deep from the surface, cold pack therapy must be applied for hours at 34-40°F on the surface to reduce internal temperatures 2-3” deep approximately 10°F or less. This 10° reduction must be continued (usually 6 hrs. or more) to effect slight contraction of the IVD fluid, which will reduce SOME pressure on the SNR.  This spells Pain Relief that cannot be obtained in any other physiological way.

:quoteright_open:It has been my experience that the successful resolution of serious pain requires the application of ice therapy for hours, rather than minutes, to penetrate deep into the spine.:quoteright_close:

By absorbing caloric heat out of swollen (inflamed) tissues…. The joints, muscles, ligaments, and nerves, will all respond to proper and persistent use of LTCT applications.  Furthermore, it would be especially effective to use immediately after an injury thereby curtailing or preventing the post-traumatic inflammatory swelling in the first place. Yet, by the time many patients seek care for intractable pain, the inflammatory process is so far along and well-entrenched that brief spells of ice therapy just won’t accomplish the goal of mitigating the pain of the patient.  What’s worse, an angry, swollen painful joint is not very amenable to Chiropractic technique, thereby delaying correction.

Moreover, the disc, when contracted by the cold therapy is easier to manipulate by Chiropractic methods.  E.g. it is much easier to press a bulge inward on an auto tire if we FIRST partially deflated it!  In fact, when a disc has been attenuated by cold therapy for 4 or 5 days, it blazes a trail for easier manipulation, for it is almost always associated with increased audible releases when the disc replacement occurs.

LTCT CAN BE A POWERFUL HEALING WEAPON;

The bottom line is, LTCT can give every D.C. the power to control nearly every kind of pain that occurs in his/her practice.  This can be a very satisfying feeling of practice control, not unlike that which M.D.’s have in using narcotics.  However, this gives Chiropractic the best of all possible worlds, because the D.C. can provide pain relief w/o the patient becoming addicted to drugs.  It engenders a “whole new ballgame” of higher levels of Chiropractic results.

Adjunctive LTCT treatment for your patients could very well make the difference between blessed recovery or continued therapeutic recalcitrance. And the far-reaching effects of raising your success rate can, needless to say, do wonders not only for mankind but for your practice as well. Some would call that a win, win situation!

HOW DOES A  D.C.  IMPLEMENT THE FULL POTENTIAL OF LTCT;

It’s quite simple .…. prescribe long term use of cold pack applications for your patients that are in PAIN.  I have found that the most effective way (although very untechnical) to use cold packs is by using ice and water alone in an 11” ice bag. The use of a 10” lumbar belt can be used for easy application to your patient’s low back. Application to the cervicals can be convenient also, by using a towel (folded long ways in 3rds draped over the neck w/ ice pack underneath. The two ends of the towel are connected in front above the chest w/ two or three rubber bands).  The Ice pack will last approximately 2 hrs, and has to be recharged with more ice for extended treatment.

The best ice bag (cap) I have found is the blue rubber-ish textured type made by the Faultless Co.  They meant what the name implies, when they named it Faultless.  They almost never leak, and can last 10 yrs. or more.  The 11″ Faultless ice cap can be purchased at nearly any Drug Store or wholesale at Bodyline Comfort Systems, and sold to your patients.

John W. Fiore, DC, attended Purdue University, majoring in Chemistry, Physics, and Biology graduating from Lincoln College in 1954.  Practiced together with his brother for 40 years and invented the “Back-Huggar” in 1968, and the “Neck-Huggar” in 1982, and founded Bodyline Comfort Systems in 1968.  Served five years as secretary of Florida Chiropractic Association.  Author of “Discaltic Aberrations of the Spine”  (Disc Theory of Chiropractic) published in the 1974 Edition of the Journal of Clinical Chiropractic.