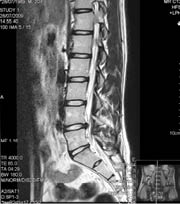 Patient DH entered our office with a 45-year history of lower back pain.   2 Years prior, the patient travelled to Germany and underwent a lumbar spine operation, whereby he had artificial disks surgically implanted at L3, L4, and L5.  The procedure was highly successful at decreasing pain and increasing ambulation.  In June of 2004, the patient was seen for difficulties with balance and proprioception secondary to a marked scoliosis related to spasmotic antalgia.  On his initial visit the patient related that there was some post-surgical improvement in balance, and a reduction in the angle of his scoliosis. However, he was now experiencing intractable pain, 8 on a scale of 0 to 10 with 10 being unbearable pain, in the left lateral ankle region, inferior to the lateral malleolus.  The pain had started 2 days prior to his initial visit.  The patient related that the pain increased upon eversion of the foot, and was felt when walking and standing.  His foot was in constant inversion with the first ray off the floor.  The patient had no prior history of foot or ankle ailments.

There was obvious swelling to the lateral ankle without erythema.  Left ankle plantar flexion was limited at 25/85  degrees (normal active range of motion for plantar flexion is 50 degrees).  Left ankle dorsiflexion was also limited at 5/15 degrees (normal is 20).  Mid Tarsal joints were slightly rigid in motion bilaterally.  Hallux dorsiflexion was normal bilaterally.  The first ray had normal range of motion in a neutral bias and position.  The dorsal pedal pulse was normal bilaterally; however, the tibialis pulse was absent bilaterally. When standing, the patient demonstrated a posture with first ray dorsi flexion whereby the first ray was elevated at proximally 1 cm off the floor.  There was dorsiflexion of the first through fifth metatarsophalangeal joints bilaterally.  Muscle testing of the tibialis anterior extensor pollicis longus was graded 5/5.  Muscle testing of the fibularis (peroneus) brevis and fibularis longus demonstrated 3+ strength on the left.  The eversion stress test was positive and produced pain in the ankle.  The inversion and side-to-side tests were negative.  Patient DH demonstrated moderate tenderness throughout the lateral compartment.  There was pinpoint tenderness at the anterior talofibular ligament with exquisite pain at the calcaneal fibular ligament.  The patient’s left shoe demonstrated disproportionately marked wear on the sole at the lateral aspect of the heel and forefoot.

Based on the examination it was apparent that patient DH had S1 inhibition, which was being expressed by a marked fibularis longus and brevis weakness.  Patient DH was compensating for this by distributing more weight on the anterior talofibular ligament and calcaneofibular ligament to check ankle inversion.  As such, there was no antagonist control of the stirrup effect created by the tibialis anterior and the fibularis longus. Without this being controlled the tibialis anterior, along with the extensor hallux longus, were overly dorsiflexing the first ray in relationship to the foot upon stance.  The excessive lateral wear pattern on the patient’s shoe was associated with a lack of antagonist control of the deep posterior compartment maintaining the foot in an inverted position throughout the gait cycle and stance.

It was hypothesized that this effect could be the result of a marked aberrant gait pattern.  Prior to the disc replacement surgery, the patient was required to ambulate via crutches or a walker.  There may also be nerve root inflammation due to the surgical procedure.  Peripheral entrapment of the fibular nerve can also occur at the proximal fibular head.  This condition could also be maintained by a supinated gait pattern at the fibular musculature which is activated during the gait cycle.  In this case, the fibularis longus may entrap the common fibular nerve at the proximal fibular head.  However, usually symptomatology and pain in the distribution of the nerve into the lower leg, foot and ankle would precede localized compartmental weakness.

Diagnosis was that of S1 neural inhibition causing fibularis longus and brevis weakness with aberrant biomechanics and pain.

Initial treatment consisted of functional application of Trigenics multimodal treatment procedures, incorporating resistive exercise neurology, mechanoreceptor manipulation and cerebropulmonary biofeedback. With Trigenics, the patient is essentially performing concentrative breathing with resisted load exercise movements while simultaneous treatment is applied to the muscle mechanoreceptors to create a cumulative afferent spinocerebellar overload. Correction of sensorimotor dysfunction is targeted by applying neuro-stimulative soft tissue treatment while the patient performs proprioceptive resisted exercises.* According to Dr. Frederick Carrick, “Trigenics is consistent with the principles of neuroplasticity and corticoneural reorganization of the sensorimotor and somatosensory systems.”

Trigenics was applied to the lateral compartment of the left lower leg.  A Trigenics myoneural strengthening procedure was performed and involved physical mechanoreceptor distortion at various points throughout the lateral compartment along with resisted antagonist manual muscle contraction at approximately 20% effort.  Concomitantly, this procedure utilized a pressurized concentrative abdominal breathing maneuver for additional neural input by way of global parasympathetic response. As a result of the application of Trigenics myoneural procedures as noted, there was an immediate, significant increase in muscle strength which improved to 4+/5.  Localized inflammation of the anterior talofibular and calcaneal fibular ligaments were treated with 1.0 W/m squared 20% pulsed ultrasound for 4 minutes and interferential with ice at 10 to 100 Hz for 10 minutes.  Post Trigenics kinetic taping was applied along the course of the fibularis longus in a facilitative pattern with tape applied at approximately 50 to 75% tension with the ankle and foot inverted and dorsiflexed.

Upon examination 5 days post treatment, the pain had reduced to a one on a scale of 0 to 10, and the frequency of the pain had reduced from constant to infrequent.  Muscle strength testing of the lateral compartment demonstrated 5-/5.  However, there was still 2-/3, moderate, pinpoint tenderness over the calcaneal fibular ligament, whereas the anterior talofibular ligament was negative.

This case demonstrated the marked effectiveness of using the multimodal Trigenics® Applied Functional Neurology® procedures in concert with kinetic facilitative taping in the treatment of pre- or post-surgical disc herniation and neuromusculoskeletal conditions or pain syndromes.

*Historically Trigenics is cited by its founder, Dr. Allan Oolo Austin, to be the first treatment of its kind to use a multimodal cumulative neural stimulation approach for enhanced outcome by combining soft tissue manipulation techniques with resisted exercise movements.

Dr. Ted Forcum is a Diplomate of the American Chiropractic Board of Sports Physicians (DACBSP). He is also a member of the ACA Council on Sports and Physical Fitness, the United States Sports Chiropractic Federation and the National Strength and Conditioning Association. Dr. Forcum is certified in KinesioTaping (CKTP), Graston Technique, NASM Certified Exercise Specialist (CES), NASM Performance Exercise Specialist (PES), and is a Registered Trigenics Practitioner (RTP). The American Chiropractic Association Council on Sports and Physical Fitness voted Dr. Forcum the 1994-95 & 2004 Sports Chiropractor of the Year and he was also awarded the 2000 ACA Sports Council Achievement Award. Dr. Forcum has worked as an event physician for such events as the Winter Olympics, U.S. Olympic Trials, U.S. Track and Field Championships and the NCAA National Championships as well as many others. Dr. Forcum has also worked extensively as a staff chiropractor for the PGA Tour.  In 2004, Dr. Forcum was voted in as the 2nd Vice President of the American Chiropractic Association Council on Sports and Physical Fitness. He has taught postdoctoral programs for Southern California Health Sciences University, Western States Chiropractic College, Logan Chiropractic College and Northwestern Health Sciences University. He is currently on the teaching faculty of FAKTR-PM and lectures nationally and internationally on the topics of sports injuries and biomechanics.