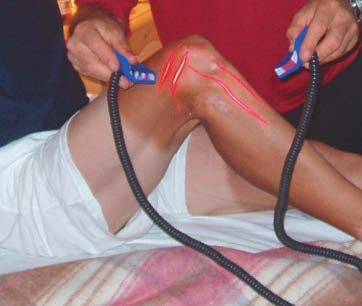 The cold laser suggests a way to reduce the mushrooming seven billion dollar costs of healthcare and lost productivity caused just by carpal tunnel syndrome, repetitive stress injuries, back and neck dysfunctions that occur in the factory and the office each year, incapacitating 185,000 workers, and to return these people back to work without debilitating pain, lengthy recovery time, or enormous heathcare bills. The cold laser can accelerate recovery time for many conditions that weaken and immobilize people for long periods of time, draining the economy, inflating healthcare costs, and interrupting careers.

The cold laser has been called “The Therapy” of the 21st Century. In over 1700 publications, there have been no recorded negative side effects. This versatile tool is totally safe, non-toxic, and easy to use. In around thirty years of using the cold laser, it has become one of the most versatile conjunctive tools we have ever used. It can do everything the acupuncture needle can do, without threat of infection or discomfort, and more. It has potent synergistic effects with nutritional therapies. It is both doctor and patient friendly.

This promising tool is called the cold laser, the soft laser, the low-power laser, or the low-level laser. The term laser, is an acronym for Light Amplification by Stimulated Emissions of Radiation. All lasers emit coherent, focused light that travels in a narrow beam in one direction.

• High Power, “hot” lasers have shorter wavelengths which have catabolic effects that can deliberately destroy tissue in cauterizing and surgical applications.

Cold lasers have stimulative effects rather than destructive ones. It may be the perfect conjunctive tool for the chiropractor, the acupuncturist, the physiatrist, the physical therapist, the dentist, the surgeon, the neurosurgeon, the neurologist, the sports medicine doctor, the dermatologist, and the general practitioner. Clinical applications of the cold laser have included acute and chronic pain reduction from many etiologies, inflammation reduction, enhanced tissue healing, cell regeneration, and replacement of the needle in acupuncture. The results have shown very rapid pain reduction and accelerated recovery times, far exceeding conventional methods.

Carpal tunnel syndrome (CTS) and repetitive stress injury (RSI) are becoming common conditions in office workers using desktop computers, in meat packing factories among meat cutters, in auto assemblers, in musicians playing stringed instruments, and other groups where mechanically repetitive motions are performed throughout the workday. Those affected frequently experience pain, numbness, tingling in hands and wrists as well as in thumb, index, and middle fingers. Those diagnosed with CTS or RSI also show neuromuscular problems in the head, neck, and upper back upon examination.

Thirty-five patients diagnosed with CTS or RSI had performed the office tasks of using computers, typing, writing, answering phones, and other clerical work. All thirty-five had consulted neurologists, internists, acupuncturists, neurosurgeons, chiropractors, or physical therapists, having tried standard treatments such as splints and analgesics, without pain relief. Symptoms had persisted from one month to ten years. All patients had various degrees of abnormal posture with forward, rounded shoulders, and head and neck stooped forward. All patients showed tenderness upon palpation in spinous processes in the lower cervical and upper thoracic spine, especially between C5 and T1. Median angle of the scapula and tendinous attachment of the trapezius at the nuchal line were also tender.

Each tender site in the cervical and thoracic spine, but not the wrists and hands, was treated from two to five minutes with a cold laser touching the skin, perpendicular to the spinous processes. Each patient was followed for a mean of 8.2 months, averaging ten treatments per patient.

Pain, numbness, and tingling in hands and wrists subsided or disappeared in all patients. None of the patients reported adverse effects or deterioration in symptoms. In Case 1, the accountant who worked at a computer experienced immediate relief, felt less pain and tingling in arms, hands, and fingers, and less tenderness in lower and upper spine. Almost all symptoms cleared in less than two months, with the exception of residual fullness in the palmar aspects of the hands.

In Case 2, a secretary presented with headaches, pain in the neck, shoulder, upper arms, forearms, wrists, hands, and fingers. Cold laser treatment was given at the sites of tender spinous processes as well as medial angle of the scapula. The pains subsided in the first treatment. After three treatments, the patient reported being pain free as long as she maintained proper head and neck posture.

In most of these cases diagnosed as CTS or RSI, the patients also remembered long ago sports injuries, automobile accident injuries, and injuries from falls. It was believed that prolonged straining of these old injuries by improper posture and ergonomics aggravated and perpetuated old microscopic or macroscopic tears in soft tissues, resulting in noxious accumulation of chemical mediators such as histamine, kinins, and other substances. The low level laser may help modulate and drain these irritating chemicals through lymphatic channels.

In a clinical trial of another hundred subjects, the majority of the test group showed significant reduction in pain levels immediately following a single treatment. This pain reduction was stable or improved further levels after twenty-four hours. The test group receiving a single laser treatment also significantly improved in all linear ranges of motion, while the placebo group did not show significant improvement.

Cold laser irradiation of sports injuries has resulted in rapid recoveries that have profoundly benefited individuals’ personal and athletic careers. In treatment of fifty-seven athletic injuries, including lacerations, abrasions, strains and sprains, overuse conditions, and stress reactions, fifty-four of the fifty-seven showed dramatically positive reductions of pain levels and improvement in functional tests. The versatility of the cold laser is suggested by the following cases.

In Case 1, a soccer player using tibial shin splints was unable to play for three weeks because of acute pain while running. Anti-inflammatory medication, taping, and cryotherapy had helped only minimally. Acupoint and local site irradiation was added to these protocols for four consecutive days. On the fifth day, the athlete was able to resume practice with minimal discomfort. On the sixth day, the athlete was pain free and completed the season without recurrence.

In Case 2, a high school defensive tackle with a history of chronic ankle sprains had been taped. The tape caused an infection, which was treated by antibiotics, and whirlpool therapy. Cold laser therapy was added to his treatment protocols. After two treatments, the wound began to granulate. After four treatments, the wound had closed and healed. The athlete returned to competition ten days prior to the date the team physician had anticipated. Similar accelerated rates of granulation and epithelialization have been noted in burn cases.

In Case 3, a pole-vaulter suffered a contusion to his scapula and had significant spasm to his trapezius and surrounding shoulder musculature. The condition did not respond to conventional treatment of moist heat and electrical stimulation. After one treatment of cold laser irradiation to trigger points and acupoints, the patient reported a fifty percent reduction in pain. Two additional treatments on two consecutive days resulted in the patient’s becoming pain free, with normal range of motion, and normal strength. In other studies of spasm, it has been suggested that dramatic spasm reduction occurs because of the laser’s stimulation of depolarization and repolarization of cell membranes in individual fibers and reduction of arteriole spasm.

These kinds of rapid improvements in pain management with 635nm cold laser treatment have also been attributed to stimulation of the mitochondria with enhanced ATP production and protein synthesis, to photochemical changes converting prostaglandins to prostacylin endoperoxide, which reduce sensitivity of nerve endings, and modulation of cortisol levels with anti-inflammatory effects. These kinds of changes are accompanied by thirty to fifty percent improvement in collagen formation in wound healing.

In summary, the cold laser can be used every day and on almost every patient with speed, accuracy and with predictable results in complete safety for the doctor and the patient.