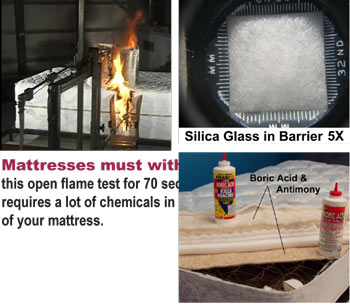 News stories across the country from CBS, NBC, ABC, and FOX have reported many sleepers and workers are sick due to sleeping on flameproof mattresses.

The news is growing, and more news is coming. Recent TV news stories on toxic beds include CBS New York, Boston, Philadelphia, Chicago, Denver, Sacramento, and more. These stories interviewed many sleepers and workers sick, and Dr. Doris Rapp, MD, who has a new book, titled “Is Your Mattress Safe?” Dr. Rapp is a leader in her field and a New York Times Bestselling Author. Other news stories have appeared in The Chicago Tribune and American Chiropractic Association articles, and more.

Both NBC and CBS recently ran Poison Mattress news features on Valentine’s Day, February 14, 2008. The NBC Investigative Reporter interviewed a US Consumer Products Safety Commission (CPSC) representative who said the toxic chemicals in beds don’t get out. Then the reporter showed the CPSC’s own scientific report proving chemicals do leach out, and are absorbed by our bodies. CPSC acting chairman, Nancy Nord, said she is concerned about flame retardant (FR) chemicals because “the health effects of some of these chemicals are not well-understood.”

NBC interviewed several mattress factory employees who say they and dozens of their co-workers have gotten sick in the past eight months.

“We’ve seen rashes and skin irritations, headaches, and sore throats,” said one of the workers.

“I’ve had nose bleeds, bronchitis, and coughing,” said another. “It’s happening to lots of us and it’s just been getting worse.”

They all say all the health problems began last year when manufactures started making mattresses that pass the government’s new flame test. When asked if they would purchase and sleep on a mattress made at their factory, the workers said they would not.

The CBS story interviews yet another person, sick, with fever and skin rashes, from two different FR mattresses. The CBS story also points out the CPSC excluded children under the age of five from their internal study by assuming all these children will sleep on vinyl sheets, due to bedwetting, and that this will protect them from the toxic chemicals in their mattresses. (European scientists proved antimony leaches through vinyl on crib mattresses. And, yes, many new crib mattresses now contain antimony.)

Both stories conclude by telling people the only way to get a chemical free mattress is by prescription.

The chemicals required to flameproof mattresses include insecticides, fertilizers, and known carcinogens. The CPSC said consumers would not be able to distinguish a safe system and, therefore, did not require labeling. Indeed, there are no nontoxic systems that pass the severe 70-second, two-foot-wide blowtorch open flame test all mattresses, including crib, must now endure. The chemicals now being added to mattresses include antimony (arsenic-cancer), boric acid (roach killer), ammonium polyphosphate (fertilizer that breaks down to ammonia), melamine (poisoned our pets recently), formaldehyde (cancer-blindness), polyvinylidene chloride (PVDC), fiberglass, and silica glass (simple glass). Many of these chemicals are proven to leach from mattresses and be absorbed by our bodies.

With no labeling requirements, almost all mattress manufacturers deny using chemicals. They might say they use rayon, (contains silica glass, PVDC, and antimony or phosphates). Or they will say they use inherently fire resistant fibers (which contain FR chemicals blended into the fiber itself, such as antimony trioxide or formaldehyde).

Organic mattresses often say they use wool. A simple match test proves wool burns. The scientific proof shows that wool burns at 600 degrees and the open flame test is 2,000 degrees, and that the only way to get wool to pass the severe open flame test is by treating it with zirconium, another heavy metal. But most use the glass-chemical combo.

So, what is making sleepers and workers sick?

It is too early to know. It has not been adequately studied. Breathing tiny fragmented glass particles, antimony, boric acid, or other chemicals could explain the respiratory problems. Antimony is known to cause skin rashes. From Wikipedia: “Clinically, antimony poisoning is very similar to arsenic poisoning. In small doses, antimony causes headache, dizziness, and depression. Larger doses cause violent and frequent vomiting, and will lead to death in a few days.”

From Scorecard.org: “Cancer: The State of California has determined under Proposition 65 that antimony oxide (antimony trioxide) is a carcinogen.”

The CPSC proved many FR chemicals leach from flameproof mattresses in significant quantities and, with small absorption, assumptions say we will absorb .8 mg antimony every night. Even .8 mg is 27 times more than the Environmental Protection Association says is safe. Antimony accumulates in our bodies. When pressed about the cancer risk from antimony trioxide, the CPSC admits, “The cancer effects are cumulative. Every exposure contributes to the overall lifetime risk of developing cancer.”

What you can do?

Inform your patients of this new health risk. Give your patients freedom of choice. Most don’t want to unknowingly sleep in and absorb toxic chemicals to avoid a 1 in 1.111 million mattress fire risk. Prescribe toxin-free mattresses. You can help create a control group of people not sleeping in chemicals, so that, later, studies could prove these new mattresses harmful and, eventually, get this myopic regulation repealed. Your actions might help save millions of lives. Prescription mattresses are not readily available in stores because retailers fear that even mentioning prescription mattresses will reveal the truth about the chemicals in other mattresses and hurt their sales.

Some chiropractors choose to sell prescription mattresses. They can be delivered directly to your patient from the manufacturer. Your prescription avoids sales tax and makes the purchase tax deductible for your patient. They can also use their health savings account. You can protect your patients’ health.

Mark Strobel is founder and owner of Strobel Technologies, which has manufactured mattresses since 1974. He was outraged the government would require toxic chemicals in all mattresses and has led the fight since 2003, and has generated a lot of news for the issue. You can learn more and see links to the news videos and stories at www.PrescriptionBeds.com. Email [email protected], or call 1-800-457-6442 for more information.