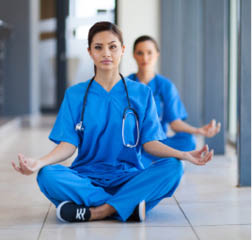 :dropcap_open:M:dropcap_close:editation can be defined as a practice of concentrated focus upon a sound, object, visualization, breathing, or movement, or as attention in order to increase awareness of the present moment, reduce stress, promote relaxation, and enhance personal and spiritual growth. It is a self-directed activity that aims to keep the mind anchored in the present moment by focusing on a single object or breath pattern.