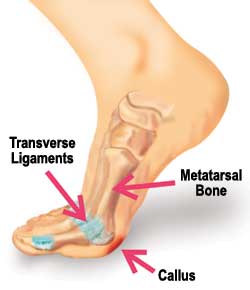 Foot pain can interfere significantly with normal activities, and severely limit participation in sports.  Metatarsalgia is foot pain involving the metatarsal bones in the forefoot—the complaint of pain on the bottom of the ball of the foot.

Metatarsalgia may be due to overuse of the foot during sports, improper footwear,1 excessive weight, foot subluxations, or other factors.  The underlying cause is often faulty foot mechanics; the most common problem is excessive pronation.  Blake and Ferguson found that joint pain and capsulitis of the metatarsals were common foot problems reported by recreational walkers and hikers.2  The second and third metatarsophalangeal joints were the most frequently involved joints.  Since the vast majority of foot problems in recreational walkers and hikers were unilateral, rather than bilateral, these researchers concluded that, “Structural anomalies and faulty biomechanics, i.e., limb length discrepancy or abnormal pronation, may be the cause or additional cause in many injuries.”

The anterior transverse arch is located immediately behind the metatarsal heads.3  When non-weightbearing, the first and fifth metatarsal heads are most prominent, and initially bear the weight of the body during gait.  As weightbearing progresses, pressure is distributed across the arch to the other three heads.  As with all arches, the ligaments and connective tissues support the anterior transverse arch,4 not muscular strength.5  Arch problems will develop when supportive tissues are put under excessive stress—either from high loads for sudden, brief periods, or from more moderate, but repetitive stresses over longer periods.  In most cases, it appears that chronic overstretching of the transverse ligaments is the underlying cause of metatarsal problems.6

One sign of abnormal transverse arch biomechanics is callus build-up.  Since plantar callosities form in response to sustained pressure patterns, they provide helpful clues regarding altered foot function.  These are commonly seen in either the forefoot (under the metatarsal heads), or under the anterior aspect of the heel.7  This pattern (under the transverse arch and at each end of the medial longitudinal arch) has always been taken to indicate that most calluses are caused primarily by arch collapse and/or excessive pronation.  A 1999 study confirmed that callus formation is closely associated with several specific “abnormal foot weightbearing patterns.”  These are a lower medial arch with greater pronation, reduced dorsiflexion of the first metatarsal joint, and limited ankle dorsiflexion (due to calf muscle tightness).8  All three factors can contribute to abnormal biomechanics of the metatarsal arch.

Helping a patient with pain at the metatarsal region requires a phased approach.  Immediate care can reduce the acute pain and inflammation.  Long-term control of the problem usually requires custom-made orthotics.

Acute relief.  Any aggravating activity must stop, and shoes should be evaluated and changed, if necessary.  A temporary metatarsal pad should be placed just proximal to the metatarsal heads to support the anterior transverse arch.9  This will relieve the weightbearing pressure on the sensitive metatarsophalangeal joints.  Anti-inflammatory and pain-relieving modalities can be considered.  Any subluxations, such as “dropped” or fixated metatarsal heads should be adjusted, as necessary.  Multiple foot subluxations, arch collapse, and excessive pronation are frequently found, so the navicular and the cuboid must be carefully evaluated.

Permanent control.  Patients should avoid shoes with a tight toe and forefoot region and reduce high heels to 1½ inches.  These instructions must be followed for best results.  Patients with tight Achilles tendons and diminished foot dorsiflexion should perform calf stretches.  In order to improve foot biomechanics and provide permanent support for the transverse arch, most patients will need custom-made orthotics.  Flexible orthotics are the most beneficial, especially for people who must be on their feet for many hours each day.  The orthotics need to support all three arches of the foot and provide cushioning and shock absorption.  Additional forefoot padding also appears to be very helpful. TAC

Dr. John J. Danchik is the seventh inductee to the American Chiropractic Association Sports Hall of Fame.  He is the current chairperson of the United States Olympic Committee’s Chiropractic Selection Program.  He lectures extensively in the United States and abroad on current trends in sports chiropractic and rehabilitation.  Dr. Danchik is an associate editor of the Journal of the Neuromusculoskeletal System.  He has been in private practice in Massachusetts for 27 years.  He can be reached by e-mail at [email protected].