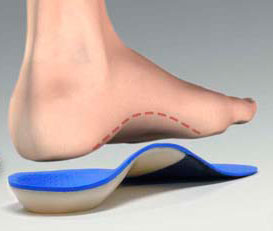 The patient is a 56-year-old male who reports severe pain on the bottom of his right foot when he begins to walk in the morning.  He also notices pain under his right heel when he has been standing for a long time (greater than one-half hour).  Over-the-counter pain medications help somewhat; but his condition does not seem to be improving, even though he has been avoiding extensive walking and standing.  He has not played racquetball for the past couple of months, due to his heel pain.  There is no history of prior injury to his right foot or ankle.

Vitals: This 5’11’’ financial consultant weighs 195 lbs. which means that he is overweight (BMI of 27).  He demonstrates a thickened waist (43 in.), confirming that his excess weight is due to abdominal fat deposition.  He is a non-smoker, and his blood pressure and pulse rate are within the normal range, probably due to his history of regular vigorous exercise during racquetball.

Posture and gait: Standing postural evaluation finds generally good alignment, but a decreased lumbar lordosis.  He has bilateral pes planus (flat foot), with no medial arches and bilateral calcaneal eversion.  These findings are somewhat more pronounced on the right side.  Both feet toe out during walking.

Chiropractic evaluation: The lumbar spine is moderately tender throughout, and he demonstrates a generalized loss of vertebral mobility, with few specific subluxations.  Orthopedic and neurological provocative testing of the spine and pelvis is negative.

Primary complaint: Examination of the right foot finds exquisite tenderness to palpation over the antero-medial aspect of the calcaneus.  All right foot ranges of motion are full and pain-free, and manual muscle testing finds no evidence of weakness when compared to the left side.

A lateral X-ray of the right foot demonstrates a small bony outgrowth from the anterior aspect of the calcaneus.

Chronic irritation of the point of insertion of the plantar fascia into the calcaneus, with radiographic evidence of a heel spur.  This appears to be secondary to long-standing biomechanical stress associated with poor foot function, and excessive loading from strenuous exercise activity and too much body weight.

Adjustments: Mobilization and adjustments were provided to the lumbopelvic region.  The right calcaneus was adjusted anteriorly and both navicular bones were adjusted superiorly.

Stabilization: Orthotics with viscoelastic, shock-absorbing materials were custom-made and fitted to support his arches and to reduce calcaneal eversion.  In addition, a calcaneal “divot” was ordered for the area under the right heel, in order to decrease the pressure on the bone spur.

Rehabilitation: The patient was shown a series of foot exercises (marble pick-up and towel-scrunching) to improve the coordination and strength of his foot intrinsic muscles.  Once he had his orthotics, he also performed standing Achilles tendon stretches, keeping his feet in forward alignment.

While his heel pain was initially somewhat slow in responding, this patient was diligent with his exercises and, after five weeks, he was able to walk in the morning with no foot pain.  At that point, he was advised to return to his regular racquetball exercise program and he had no recurrence of heel pain.  He was released to a self-directed maintenance program after a total of sixteen visits over three months.

Radiographic evidence of a heel spur does not always correlate with heel pain.  However, it is frequently an indication of chronic biomechanical stress to the insertion of the plantar fascia.  Symptomatic heel spurs are difficult case presentations, and they require appropriate patient education.

If this overweight 56-year-old man had been less active (or had been a swimmer), or if he had inherited feet with better arches, he would have been less susceptible.  And, if he is able to follow through on his decision to drop twenty pounds of abdominal adipose tissue (which is necessary for him to be considered in the normal weight range for his height), he will be less likely to suffer future recurrences.

Dr. John J. Danchik is the seventh inductee to the American Chiropractic Association Sports Hall of Fame.  He is the current chairperson of the United States Olympic Committee’s Chiropractic Selection Program.  He lectures extensively in the United States and abroad on current trends in sports chiropractic and rehabilitation.  Dr. Danchik is an associate editor of the Journal of the Neuromusculoskeletal System.  He has been in private practice in Massachusetts for 29 years.  He can be reached by e-mail at [email protected].