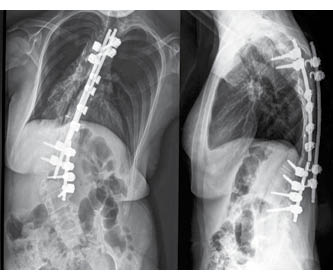 A look at the unique 3-step approach to treat scoliosis
:dropcap_open:I:dropcap_close:n an age when scoliosis is being viewed as much more than a mere spine curvature, a holistic view offers the essential dictates of diet and exercise to form a non-invasive and long-term solution to the disease, aided by the use of the state-of-the-art devices from Meditrac, Vertetrac as well as the Dynamic Brace System (DBS). It’s a story about Andrea, a 44-year-old mother of two, born with scoliosis, who gained full recovery with non-surgical correction methods. Not only did Andrea experience a 20 degrees correction in her curvature, but she is also a much happier and healthier individual now.

Scoliosis – the scenario
Recent research suggests that at least one in four kids suffering from scoliosis might have to opt for surgery. Such is the prevalence of the disease that is best defined as the spine’s curvature from side to side, forming a ‘C’ or ‘S’, instead of a straight line.
Historically, the traditional line of treatment for scoliosis has mostly traced a three-step line. The first step usually starts when an abnormality is noticed in the body and a curvature observed in an x-ray. According to the line of therapy I have implemented, this stage mostly begins by assessing the exact degree of curvature, looking into the dietary habits and then prescribing a correctional routine comprising of appropriate diet and exercise.
On the contrary, in the current scenario, for curvatures less than 20 degrees of Cobb Angle, it would normally be decided to adopt the wait and see approach for the curvature to go away on its own, which in most cases doesn’t happen. Following this highly laid-back approach, when the curvature passes approximately 25 degree Cobb Angle, the next immediate resort is to take to bracing, and if even after bracing the curvature reaches past 40 degrees then surgery is recommended, when all else fails.
To wait and watch?
Research shows how the tendency to wait and watch leads to aggravated damage in terms of physical as well as psychological health and also causes a financial drain. Studies estimate that more than 20,000 scoliosis fusion surgeries are performed every year in the US. In most of the cases, neither the rigid nor the soft braces are as effective in preventing further curvatures and hence invasive surgeries.
:dropcap_open:In most of the cases, neither the rigid nor the soft braces are as effective in preventing further curvatures and hence invasive surgeries.:quoteleft_close:
Needless to say, it could be extremely hazardous to simply wait and watch. Scoliosis mostly starts as a spasm of muscles on one side of the spine. This might be happening due to a dysfunction in the way the brain perceives the position of the spine.
It further propels the spine to curve to that particular side, causing the ligaments and muscles on that side to harden. This hardening actually explains why the spine becomes crooked. The typical ‘S’ shape will start forming when the same phenomenon begins to happen with the other side of muscles as well. That explains why it is best to disrupt this ongoing process and halt the progression of scoliosis as early as possible.
A different viewpoint
However, the traditional line of treatment is now being debated amongst professionals. A greater need is being felt to view scoliosis as a neurological condition that affects the spine in the form of a curvature.
Experts view scoliosis as a symptom of a deeper underlying issue, one that implies a bigger biochemical and mechanical dysfunction in the person. A great example is the case of Alisa L., a 56-year-old school teacher who reported incidence of high cholesterol, severe digestive problems and strong lower back ache. In my book, Health in Your Hands, I have described my treatment methods, which include correcting her dietary habits and showing her how to eat healthy. Not only did the drug-free approach relieve her of her back pain with the use of Vertetrac and DBS, it also eliminated the digestive problems and normalized her cholesterol levels.

The 3-step approach
I must admit that I view human disease from a holistic viewpoint, and firmly believe in the power of the human body and mind over disease and health. From reducing a 15-year-old’s spine curvature from 45° to 28° and a 70-year-old’s curvature from 16° to 4°, I have been using these amazing principles of nutrition and exercise to cure scores of scoliosis patients.
My approach to scoliosis follows a multi-dimensional 3-step approach, implemented as follows:
Step 1: To identify the nutritional routine, dietary habits, deficiencies and an inappropriate pattern which might be the underlying cause and hence the potential solution to the worsening scoliosis.
Step 2: To identify the exercise needs and plan a customized fitness regimen for the patient.
Step 3: Offering a holistic approach to reducing the impact of the disease on the patient’s life.
The comperehensive nutritional approach
Based on the findings of modern nutritional researchers, I follow a unique categorization approach when it comes to using nutrition as a means to identify and cure the disorder. When planning a course of treatment for a patient with symptoms of scoliosis, it begins by soliciting the need to eat according to the basic genetic make-up of the patient, categorized as the protein, carbohydrates or the mixed types. I will then prescribe a food pattern such as the Paleolithic diet.
:dropcap_open:Interestingly, there is an association between bone health and gut health:quoteleft_close:
A typical case of mine demonstrates the power of such a Paleolithic diet very well. The patient in question was underweight to start with, which had strong correlation with his history of scoliosis. Put on a diet of fermented foods such as kefir and sauerkraut, his digestive tissue was healed and he was advised to eat food which suited his metabolism. In such cases, I mostly strive to cut down on sugars and grains and emphasize the need to increase the intake of organs and fats, comprising of fat-soluble vitamins D,K, and A.
Equally interesting is the case of Isla W., a 24-year-old athlete who once was categorized as the fast oxidizing protein type and received corrective treatment and nutritional advice.
Similar case studies and detailed research point towards significant correlation between nutritional disorders and scoliosis. Interestingly, there is an association between bone health and gut health, which suggests how nutritional habits can aggravate or for that matter cure scoliosis while about 80% of the immune system resides in the gastrointestinal tract.
The customized fitness regimen
There is an effective combination of overall muscular fitness along with use of Vertetrac and the Dynamic Brace System (DBS), offering a highly patient-friendly dynamic lumber ambulatory traction system and treatment for idiopathic scoliosis.
Going by Meditrac’s watchword, Traction on the move, both of these devices, the Vertetrac as well as DBS, offer a unique approach to scoliosis treatment because they are patient-friendly, cost-effective and highly result-oriented. For instance, Vertetrac, an absolutely unique lumbar traction system, goes much beyond what the traditional traction system does. It combines traction with horizontal force to facilitate a simultaneous 3D treatment with asymmetrical traction options. To be used only for very brief sessions, both Vertetrac and DBS disrupt your physical movements to the minimum. Actually decompressing and remodeling the spine, these even allow you to easily walk, sit or stand even while wearing the device.
My fitness regime is perhaps best explained in the case of Cher, whose spine curvature worsened from 38° in her first diagnosis when she was merely 13 years of age to 55° years later. Following my approach, I started treating her and after a 6-month-long intervention into her dietary habits and a regular, planned fitness regimen, including the use of Vertetrac and DBS, her scoliosis finally showed a 15 degree improvement.
The key premise
My therapeutic techniques are based on the strong foothold of proper postural habits and a healthy lifestyle and combine the power of the right posture with a set of easy-to-follow, specific body balancing stretches, core building and body alignment exercises to form an appropriate fitness regimen.
:quoteright_open:In fact, the latest research on scoliosis actually points to the possibility of re-training the brain through a set of highly specialized scoliosis exercises.:quoteright_close:
To begin with, I start by leading the patient to spot the tight muscles in his back, defined by the portions that will give discomfort when stretched. According to my belief, any type of stretching and strengthening exercises will only be of help if both the patient and his physician know exactly how and at which spots his body is out of balance. The process is further carried forward by identifying the muscle groups that are tight and the bones that might not be in their exact positions.
In fact, the latest research on scoliosis actually points to the possibility of re-training the brain through a set of highly specialized scoliosis exercises. In relation to the suspected neurological origin of the problem, these exercises are expected to develop new neurological pathways which the brain is likely to take to, hence the likely cure.
Through a series of scientifically designed stretches and body alignment exercises, such as Neck Rotators, The Stretch Reflex, Neck Side Flexion, Neck Extensors, Levator Scapulae Stretch, Scratch Stretch, and Trunk Side Bending and Lumbar Scoliosis Stretch, the target of correcting the balance within the body and reducing the symptoms of scoliosis could be attained.

Dr Kevin Lau D.C. is the founder of Health in Your Hands, a series of tools for Scoliosis prevention and treatment. The set includes his book Your Plan for Natural Scoliosis Prevention and Treatment, a companion Scoliosis Exercises for Prevention and Correction DVD, and the innovative new iPhone application ScolioTrack. He is a member of International Society On Scoliosis Orthopaedic and Rehabilitation Treatment (SOSORT).