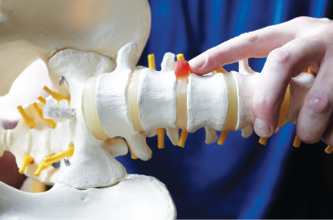 :dropcap_open:I:dropcap_close:magine for a moment that you are asked to use a new “thing” that looks like a television but has a keyboard and performs mathematical calculations as simply as your calculator. Or try a “wireless” phone, a phone that doesn’t need to be attached to the wall. These are two examples of new and innovative products which, at the time, no one guessed would dramatically impact the world. In the ever-changing world of medical procedures, practices and equipment, who would have thought that a laser would eventually be used to correct vision problems?

Joseph Marie Jacquard invented the first “computer” in 1801 in the textile industry by introducing a series of punch paper cards to make his textile loom weave intricate patterns automatically. The first “cell” or “mobile” phone was invented in the early 1900s by Reginard Fessenden, who called it a “radiophone”. From its original incarnation, the radiophone evolved into a necessary piece of equipment for the military in the Second World War. It continued to evolve and be modified until Dr. Cooper of Motorola demonstrated the first cell phone in 1973, which weighed 1kg. In 1973 cell phones were still contained in a large box; now over 5.6 billion pocket-sized cell phones are in use. Modern-day laser eye surgery was started in 1987 by Dr. Trokel, who modified the 1970’s Excimer laser, which was originally used to etch silicon chips used in the computer industry. Dr. Trokel evolved the equipment and procedure and perfected the use of the laser for corrective eye surgery over the next 10 years. The U.S. government in 1996 approved the treatment with a thousand-fold increase in available eye treatment options. Since its commercial introduction in 1987, millions of patients have received the vision changing surgery.

Why would anyone buy a ‘computer’ that only performs mathematical computations no better than a calculator, buy a 1 kg “mobile” phone or let a doctor use a laser to correct an eye condition? Were these fads or the evolution of technology and procedure?

Traction of varying human body parts has occurred for generations for a multitude of different reasons, including torture during the medieval ages, which evolved into a variety of procedures to reduce stiffness and decrease spasms. Through the never-ending advancements and understanding of science and physiology we now know how traction as a mechanism works. Specifically, this mechanism facilitates an increase in activity of the mechanoreceptor/golgi tendon organ activity, which causes muscle relaxation. This helps to reduce fiber, adhesions and scar tissue and begins intervertebral disc rehydration.

One of the earliest and more recognized spinal traction protocols for treatment purposes began in the 1960s with Dr. James Cox developing a technique, still used by many practitioners today, known as Cox flexion-distraction. This treatment is a non-surgical technique using a flexion-distraction table to separate the predominately lumbar vertebrae by flexing the lumbar spine and decreasing the compressive forces on the spinal nerves in order to return motion to the spinal joints and widen the spinal foramen. This procedure utilizes gravity and the practitioner’s manual therapy, or motor “pull”, to induce the “traction”, or distractive force. Patients exposed to this treatment were getting and staying healthier than ever before, though the specific physiologic changes were unknown. This “traction” treatment appeared to not only break adhesions and fiber but also, more importantly, worked on the soft tissue mechano/stretch receptors and allowed muscles to relax and open spinal foramen, thereby freeing the spinal nerves and allowing for less nerve impedance and increased conductance.

Various traction devices were developed from the Cox technique, including sand bags, water bags and springs as counter forces. Low back traction treatments were more complicated. The patient had to endure a more sizable and cumbersome setup, with the tables achieving some degree of momentary satisfaction. These traction tables for low back and leg conditions were designed to create a tensile force against the spine and used a variety of counter forces, including gravity, as seen with inversion tables, or a loaded spring mechanism for “traction” tables.

This spring mechanism was manually “set” with a predetermined weight without the application of sensors that would monitor and adjust the applied force. The patient would experience a general force gradient with the table not changing for physiologic changes and would experience either a greater force than what was required, potentially damaging tissue, or less force, causing no anatomic or physiology change and no benefit. The first “modern” decompression table was developed and pioneered by Dr. Allan Dyer, Ph.D., M.D. some twenty-seven years ago in 1985, two years before laser eye surgery began, and has further evolved into the on-surgical axial spinal decompression table of today.

Our world has changed dramatically with the introduction of computers into every area of our lives. Computers have revolutionized our world, from the way we communicate to the way our vehicles adapt our driving experience to the way in which medical procedures are controlled through intricate engineering products. The next step in the evolution of spinal decompression was the integration of the computer, creating a treatment environment which could adapt immediately to the changing environment of the human physiology and create a precise treatment with truly remarkable outcomes.

Today, non-surgical axial spinal decompression therapy is as integrated with the computer as cell phones are to our communication, laser eye surgery is to the treatment of vision changes or the computer itself is to our communication age. This new-found integration of the computer and table sensors creates an environment where the table will respond immediately to the patient’s physiologic changes. The sensors and controlling computer cause the table to react immediately to any anatomic and physiologic changes which occur at the specific location of the desired treatment, producing a “true” decompression force within the spinal disc.

As seen with other industries producing life-changing products, the original product may morph and evolve into something very different from the original model, yet with the same desired intent, unlike a fad which doesn’t evolve or morph but will only disappear. With an estimated eight thousand practitioners using non-surgical axial spinal decompression technology today, the original desired treatment intent and sought-after outcome will steadily continue via the normal evolutionary process.

Dr. Donald Geisler, D.C., B.Sc.(H.K.), is a 2000 graduate of New York Chiropractic College, a HillDT Solutions certified practitioner and instructor. In addition to spinal decompression instruction, Dr. Geisler is the owner of a successful, award winning multidisciplinary practice in Oakville, Ontario, Canada. Email him at [email protected] or visit www.oakspine.com.