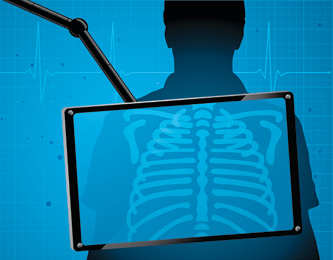 :dropcap_open:X:dropcap_close:-rays play an important role in determining the exact cause for many health complications in patients. The advancements in radiography are allowing physicians to pinpoint the exact cause of complications through high quality output in a matter of seconds. As a chiropractor, it is important to determine what part of the body is causing the trouble, and you can do that easily with digital radiography. You can choose one of three digital X-ray options to set up in your chiropractic clinic.

As the images are now digitized, the need for chemicals, X-ray films and a darkroom does not exist. Computed radiography equipment requires regular maintenance and replacement as the moving parts tend to wear out after prolonged use.

The charge-coupled device is the closest arrangement to flat panel digital X-rays. They produce fairly high quality imaging using an extensive setup of cameras and mirrors. Some elaborate arrangements are known to contain almost 192 cameras. Charge-coupled device (CCD) systems were extremely popular a while back because they produced results closest to those from flat panel detectors for a fraction of the cost. CCDs are still highly preferred among physicians and clinics because they are cost effective. By choosing the right model, you will get high quality imagery with lower maintenance costs than computed radiography.

Although they are much cheaper, charge-coupled devices are bulky and occupy a lot of space. They also require high frequency generators to produce high quality images. The hundreds of cameras attached to the device need to be recalibrated every few weeks to ensure that there are no blank spaces in the output. A huge advantage CCD has over computed radiography is the response time. Each image can be captured and digitized in just about five seconds.

Although flat panel digital X-ray detectors were considered to be too pricy a few years ago, they are now more affordable and popular than ever. Most hospitals are switching to flat panel detectors because they produce the best results in the shortest amount of time. These detectors are also the safest for patients as they emit the least amount of radiation. Flat panel detectors (FPDs) are known to produce the most detailed images, which help chiropractors detect even the smallest inconsistencies in the body. As they contain no moving parts, FPDs are long-lasting with an average lifespan of at least one million exposures. Unlike CCDs, flat panel detectors do not require high frequency generators to achieve excellent image quality. Taking only two to five seconds for each image, an FPD’s only drawback is its slightly higher price than CR or CCD. However, a flat panel upgrade is the most economical long-term digital X-ray solution in my opinion.

Ryan has been involved in the X-Ray business for 15 years. He started doing X-Ray service and is now a top sales producer at Viztek based in Garner NC. The evolution of Digital X-Ray imaging has created numerous opportunities for streamlining medical practices throughout the country. Ryan specializes in converting Analog customers to a completely Digital Imaging solutions.www.Viztek.net