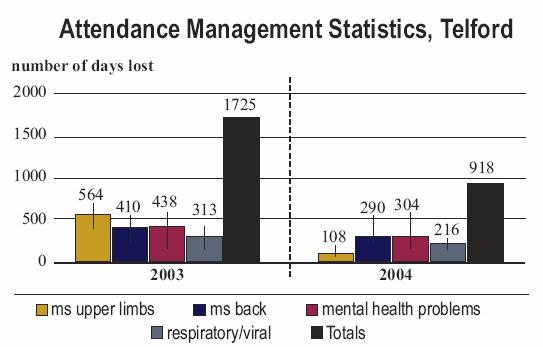 A few years ago I met Patsy Mckenna, an Occupational Health Regional Manager for a large national gas pipeline company here in the UK. Patsy invited me to give a presentation to some of her colleagues at their head office in Birmingham, and although it was over 50 miles from my practice I agreed to do it. After all, I felt it could only enhance chiropractic awareness both within the industrial care arena, and for the community in general.

The presentation was received enthusiastically and I went back to my clinic and gave it little thought. A few weeks later Patsy informed me that she was changing companies and moving closer to home. She was now to take on the role of Occupational Health Advisor for Heinz Foodservice in Telford, Shropshire – a factory with around 200 employees less than ten miles away (she was later to take on an advisory role for Heinz Europe regarding Occupational Health).

At that time my chiropractic clinic, unlike the mainstream medical providers Heinz was utilizing, was not covered by their particular health insurance provider. Patsy, to her credit, was not to be deterred. Understanding the benefi ts of a proactive approach, and wanting to introduce chiropractic care as part of her industrial care strategy, she managed to secure a small budget from Heinz that would allow her to send particular cases to me for a consultation and a subsequent six follow up visits with a re-exam.

Any chiropractor in clinical practice will recognize that healing is a process rather than an event. The challenge here would be to show signifi cant results within a limited timeframe. Thankfully this was achieved, and well documented, so when the time came for the next budget Heinz extended their commitment to an initial twelve visits for their staff. This again was outside their insurance coverage at that time and so they were paying directly out of their Occupational Health budget. (We were later to be covered by their providers in 2005).

So why would a company like Heinz—under strict budget controls, as all big companies are – be so interested in providing chiropractic services for their staff? If we take a look at the graph below it becomes clear and apparent. Put simply, it just made good business sense.

This graph pertains to the fi rst 13 month period that Patsy McKenna was gathering data at Heinz Foodservice in Telford and as such represents the fi rst 13 month introduction of chiropractic into their industrial care strategy. It is important to note that access to standard medical services was still covered by insurance and therefore did not change during this time period. The main variable was a good working relationship between Occupational Health Advisor and Chiropractic Provider.

An understanding that Chiropractic is based on the reintegration of normal nerve function, and therefore can have positive influences on the body as a whole, was refl ected by the type of referrals that Patsy sent to this clinic.

These figures demonstrate that Heinz Foodservice Telford, with a staffi ng level of around 200 employees, reported a statistically signifi cant reduction in workdays lost over the 13 month period that these records refl ect.

This suggests that many companies could achieve signifi cant cost savings with regard to employee attendance simply by incorporating chiropractic services into their industrial care strategies. Newport Chiropractic and Heinz Foodservice Telford continue to have a positive working relationship.

– My thanks go to Patsy McKenna for her work in promoting chiropractic within the occupational health fi eld and for keeping these statistics, and also to Nigel Disney, Health and Safety Manager Heinz Foodservice Telford, for agreeing to allow us to use them.

– Please note that we did not embark with the intention of creating a designed research study. This data merely refl ects a record of what happened.

Dr. Iain Smith is a graduate of Palmer College of Chiropractic (USA) and a member of the BCA, ICA and SOTO Europe. He can be reached at [email protected]