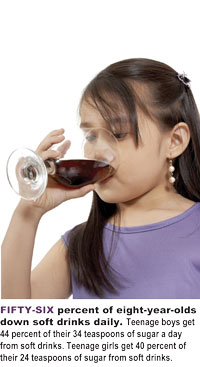 The majority of osteoporosis cases could be prevented. Bone is a living tissue that is constantly being broken down and rebuilt. Bone health is dependent on routine weight-bearing exercise, healthy habits (no smoking; moderate alcohol, caffeine, and sugar consumption, etc.) and an intricate interplay of over a dozen nutrients.

Children consuming a typical nutrient-deficient Western diet are setting the stage for the onset of osteoporosis.

Soft drinks, which now make up one-third of an adolescent’s daily beverage intake, depletes bone building calcium. Ninth- and tenth-grade girls who drink sodas have three times the risk of bone fractures compared with those who don’t drink carbonated beverages.

The U.S. Department of Agriculture (USDA) recommends that people eating 2,200 calories a day not eat more than 12 teaspoons a day of refined sugar. Sugar consumption upsets the natural homeostasis of calcium and phosphorus in the blood. Normally, these minerals exist in a precise ratio of ten to four. The excess serum calcium, which comes from the bones and teeth, cannot be fully utilized because phosphorus levels are too low.

Calcium is excreted in the urine or stored in abnormal deposits such as kidney stones and gallstones. High-fructose corn, which is the predominate sugar in soft drinks, inhibits copper metabolism. A deficiency in copper leads to bone fragility, as well as many other unwanted health conditions.

Other research suggests that high-fructose corn syrup, which has climbed from zero consumption in 1966 to 62.6 pounds per person in 2001, alters the magnesium balance in the body which, in turn, accelerates bone loss. An optimal level of magnesium, which helps with calcium absorption, is essential for bone formation. Studies have found that magnesium deficiency is associated with osteoporosis and bone fragility and that adequate magnesium intake results in increased bone mineral density. The latest government study shows a staggering 68 percent of Americans do not consume the recommended daily intake of magnesium. Even more frightening are data from this study showing that 19 percent of Americans do not consume even half of the government’s recommended daily intake of magnesium.

In contrast to the normal nutrient depleted “Western diet,” research shows that consumption of fruits and vegetables, especially dark green leafy vegetables, offers considerable protection from osteoporosis. These foods are a rich source of bone-building vitamins and minerals that include calcium, magnesium, boron, and vitamin K. Vitamin K helps facilitate the production of osteocalcin, the major non-collagan protein in bone. Osteocalcin keeps calcium molecules anchored within bone. Boron supplementation has been shown to reduce urinary calcium excretion by 44 percent. It’s also required to activate certain important bone building hormones like vitamin D and 17-beta-estradiol, the most active form of estrogen.

Of course, most kids won’t go near a green leafy vegetable. And adults aren’t much better. Less than 10 percent of Americans eat the minimum recommendation of two fruits and vegetables a day. And, worse, only 51 percent eat at least one vegetable a day.

So, unfortunately, most folks are setting themselves up for trouble.

Calcium intake is the cornerstone for osteoporosis prevention. Several studies have shown that calcium can reduce bone loss and suppress bone turnover. However, calcium supplementation alone doesn’t halt bone loss completely, but does reduce calcium excretion by 30-50 percent. One study shows that postmenopausal women taking one gram of elemental calcium were four and half times less likely to fracture than those on placebo.

The absorption of calcium is dependant on stomach acid for ionization. Because gastric acid facilitates the absorption of insoluble ingested calcium, stomach acid reducing drugs, including Tums, Zantac, Nexium, Pepcid, Prilosec, and Tagament, increase the risk of bone loss.

Studies show the risk of hip fracture is directly related to the duration of proton pump and antacid drugs, ranging from 22 percent for one year of use to 59 percent for four years of use, relative to nonuse.

You should know that corticosteroids, and most diuretics (Lasix, Dyazide, Maxzide, and others) also deplete calcium. Vitamin D, a hormone-like substance, is crucial for the absorption of calcium. The skin makes Vitamin D after exposure to sunlight or ultraviolet radiation, and vitamin D deficiency is widespread throughout the United States. In the winter, vitamin D levels often plummet. Less than 10 percent of adults fifty to seventy years old, and only about 2 percent of people over seventy were found to be getting the recommended amounts of vitamin D from food. Even when supplements were added into consideration, still, only about 30 percent of people ages fifty to seventy and 10 percent of those over seventy were reaching the recommended vitamin D intake.

Until recently, hormone replacement therapy was considered the best way to prevent bone loss and osteoporosis. However, the benefits have to be weighed against recent evidence linking conventional estrogen replacement therapy to increased risk of breast cancer, stroke, heart attack, and blood clots.

Another, certainly safer, option is to use phytoestrogens. Phytoestrogens are estrogen-like compounds found in certain foods including fennel, celery, soy, nuts, whole grains, apples, and alfalfa. A semi-synthetic isoflavanoid, known as ipriflavone, is similar in structure to soy and has been approved for osteoporosis prevention in Japan, Hungary, and Italy. Studies show that ipriflavone, now available as a supplement in the US, increases bone density in individuals with osteoporosis.

Based on the pioneering work of John Lee, MD, compounded (from wild yams) progesterone cream has been safely used by thousands of women to reduce menopause symptoms, prevent bone loss, and reverse osteoporosis.

Individuals who wish to avoid osteoporosis would be wise eat more fruits and vegetables, maintain a consistent exercise program, avoid sodas, avoid health robbing habits (smoking, excess alcohol and sugar), and take a good optimal daily allowance multivitamin. Those females who want to reverse bone loss should take, in addition to their multivitamin, extra calcium, magnesium, vitamin D, and one or more of ancillary treatments mentioned above (ipriflavone and natural progesterone).

But, we need to realize, good health doesn’t come from a pill bottle, but from daily dietary choices made over a lifetime. I think I’ll have a green leafy salad with dinner tonight. How about you?

Rodger Murphree, D.C., has been in private practice since 1990. He is the founder of, and past clinic director for a large integrated medical practice which was located on the campus of Brookwood Hospital in Birmingham, Alabama. He is the author of Treating and Beating Fibromyalgia and Chronic Fatigue Syndrome, Heart Disease What Your Doctor Won’t Tell You, and Treating and Beating Anxiety and Depression with Orthomolecular Medicine. He can be reached at www.treatingandbeating.com, by email at [email protected] or call 1-205-879-2383.