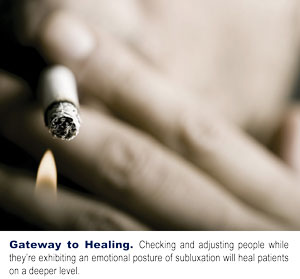 The posture of subluxation (POS) is not limited to physical or emotional states. Many diverse health conditions will exhibit a unique POS.

As discussed in Part 4 of this series, we have discovered an allergy POS that, when corrected, may have a powerful effect on allergy symptoms.

That is only one example. Clinical research reveals that we can have an immunological POS, a neurological POS, a visual POS, a hormonal POS, a dyslexia POS, a weight loss POS, a bad habit POS, a smoking POS and many, many other POS’s.

Why does this occur? It occurs because subluxations are state-specific. By that I mean, body structure varies with a patient’s state of mind or consciousness: structure follows consciousness.

That means, when we think of emotional traumas, diseases, habits or other issues, our structural systems change. The body will reveal subluxations that were not there a moment before. The power of mind or consciousness to affect the body is nothing new. Research into the placebo reveals it has powerful potential to reverse or modify nearly any disease.

The power of consciousness over the physical body is most dramatically evident in individuals who have a form of dissociative disorder known as multiple personality disorder. As the person shifts personalities, physical traits may dramatically change. This phenomenon is discussed in The Holographic Universe by Michael Talbot (NY: Harper Collins;1991:97-100.): “In addition to possessing different brain-wave patterns…more noteworthy are the biological changes in a multiple’s body when they switch personalities. Frequently a medical condition possessed by one personality will mysteriously vanish when another personality takes over…. By changing personalities, a multiple who is drunk can instantly become sober…. Other conditions that can vary from personality to personality include scars, burn marks, cysts, and left and right handedness. Visual acuity can differ and some multiples have to carry two or three different pairs of eyeglasses to accommodate their alternating personalities.”

In light of the above, it should not surprise us that body structure would change as well. (For years I’ve heard anecdotal stories similar to the above from chiropractors who have cared for patients with multiple personality disorder.)

Using Koren Specific Technique (KST), we have found that body structure may not only reflect state of mind, but may also serve as a portal or gateway for healing.*

How do we use this information to address weight problems and bad habits such as smoking?

Let’s first put the patient in the posture of subluxation. One way we can do that is to ask the patient to think of their desire for food or cigarettes (or some other issue they’d like to address) and see what subluxations appear. We then adjust those subluxations while they are in that state of mind.

Clinically, we find it helps to be as specific as possible in re-creating the subluxation pattern. For example, if a person eats too much junk food or has a craving for diet soda, they should think of that specific craving—they should feel the craving, and be checked for subluxations and adjusted as they are in that state of mind/consciousness.

In accordance with empirical (vitalistic) philosophy, KST is based on clinical success. That does not negate the search for understanding mechanisms of action, but puts it secondary to getting the patient’s well.

Using the state-specific posture of subluxation, we have the potential to help people who are suffering from a multitude of problems. KST can be applied to various psychological problems such as drug/alcohol abuse, self-sabotaging thought patterns and other issues as well. I invite you to learn KST and explore these realms with us.

*The concept of the portal or gateway has been discussed and used by Donny Epstein, DC, developer of Network Spinal Analysis.

Koren Specific Technique, developed by Tedd Koren, DC, is a quick and easy way to locate and correct subluxations anywhere in the body. It is gentle for the patient and the doctor. Patients hold their adjustments longer. KST practitioners can specifically analyze and adjust themselves. For seminar information go to www.teddkorenseminars.com or call 1-800-537-3001. Write to Dr. Koren at  [email protected].