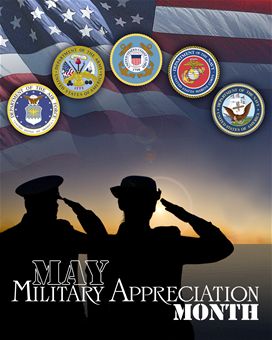 May is National Military Appreciation Month, and Palmer College of Chiropractic is announcing two new services for veterans and active duty military personnel in support of our nation’s military. The first is Palmer’s official affiliation with the national Yellow Ribbon GI Education Enhancement Program, which essentially provides eligible veterans with full tuition to attend Palmer College for one year. The second is that the Palmer Chiropractic Clinics are expanding their healthcare services to military personnel and their families by formalizing a cooperative relationship with the Community Based Warrior in Transition Unit-Illinois (CBWTU-IL).

Through a unique program offered by the U.S. Department of Veterans Affairs (VA), Palmer College of Chiropractic is making it possible for eligible U.S. veterans enrolled or about to enroll at the college to have all of their tuition paid for a one-year period. Known as the Yellow Ribbon GI Education Enhancement Program, the plan takes care of all undergraduate and graduate tuition not already provided for by the Post-9/11 Veterans Educational Assistance Act of 2008.

Starting Aug. 1, 2011, qualifying veterans who are current or incoming students on any of the three Palmer College of Chiropractic campuses (in Davenport, Iowa, San Jose, Calif., and Port Orange, Fla.) will be able to apply to the Yellow Ribbon Program on a first-come, first-served basis. Those accepted will have their tuition costs covered for one year, beginning with the fall 2011 term.

Community Based Warrior in Transition Unit-Illinois

The Community Based Warrior in Transition Unit-Illinois is committed to wounded warrior care with a focus on medical treatment while soldiers are in their homes. Commanded by U.S. Army CPT Martin Munoz, the CBWTU-IL provides command and control and medical case management to Army soldiers injured or ill as the result of their military service during the Global War on Terrorism. This type of treatment allows them to be within their family support network and gives them the ability to receive treatment from local healthcare professionals. CBWTU-IL is headquartered at the Rock Island Arsenal and operates across an eight-state area including Minnesota, Wisconsin, Michigan, Iowa, Illinois, Ohio, Kentucky and Indiana.

Palmer’s faculty clinicians and interns will be contributing to the physical examination of wounded, injured or ill active duty service men and women by performing range-of-motion evaluations at the Palmer Chiropractic Clinics located in Davenport and Moline. The results of the physical examinations will be used by CBWTU-IL medical personnel and other Army and governmental agencies to support the wounded warriors with transitional benefits assistance, employment and re-employment, state level benefits, and reintegration into the fighting force.

The Palmer Chiropractic Clinics located in Davenport, Iowa, Moline, Ill., San Jose, Calif., and Port Orange and South Daytona, Fla., already offer free chiropractic care to active duty military personnel and their families, including those in the National Guard or Reserves who are without any other chiropractic benefits. Veterans classified as 20 percent or more disabled by the U.S. Department of Veterans Affairs as a result of injuries or illness during military service also are eligible for complimentary services. These include chiropractic examinations, adjustments, X-rays and rehabilitative services.