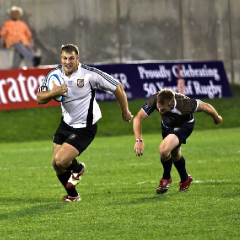 The Palmer College of Chiropractic Rugby Football Club claimed third place overall by beating the Boston Irish Wolfhounds 50-14 in the consolation round of the USA Men’s Division 1 Rugby Championship in Glendale, Colo., on Sunday, June 5. This is the first time Palmer has finished higher than fourth place in the USA Men’s Division 1 national tournament.

“I want to congratulate our nationally recognized Palmer Rugby team on their strong showing this weekend,” said Chancellor Dennis Marchiori, D.C., Ph.D., who traveled with his family to Glendale to watch the team compete. “Not only is it exciting to watch these players demonstrate the passion they have for the sport, it is equally impressive to see these men showcase their Palmer Pride.”

The Palmer ruggers lost to Olympic Club 41-29 in a hard-fought semi-final match on Saturday, June 4. All tournament results can be found at www.usarugby.org.

The 2011 squad is the first Palmer team to qualify for the final four in this tournament in back-to-back years, and is the first team to finish third overall. With many players set to return next year, the Palmer team has high hopes for the 2012 season.