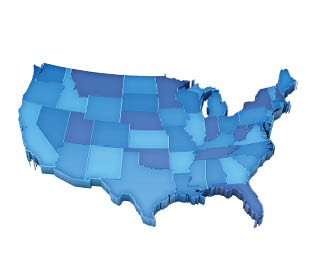 Comparison of Collections vs. Cost of Living Analysis
:dropcap_open:I:dropcap_close:n February of 2011, I wrote in The American Chiropractor magazine, “Why is a life in Tennessee, South Dakota, and Texas worth more than a life in Hawaii and New York?” There is really no reason other than insurance companies and state politicians allow it to be. We are a country of laws and regulations, and these laws dictate the marketplace and reimbursements for doctors’ services. In most states, it is based upon the usual and customary fees of the doctors and the carriers paying a percentage of those fees. However, in states like New York, the state sets the doctor’s fees and they are driven by politics at their ugliest.

The collections listed in the following table depict what fees chiropractors collected as of May 2013 on a per-visit basis for a typical treatment versus fees collected in February 2011. They are rated against the cost of living for each state in comparison to other states. The dollar amounts exclude examinations, x-rays, supports, and any other ancillary services or testing.
These numbers of reporting doctors do not reflect a large enough sample size to reflect the average. However, the numbers do reflect accurate amounts that can be collected. I choose to publish the highest amount reported by doctors per state. If a carrier will pay a doctor for one visit using the parameters above, then that is the potential for collections in that state. In some states, the highest number was not available, so the amount cannot be lower than reported.
As I established in my article in 2011, cost of living is not an indicator for reimbursement in personal injury as one would logically conclude. In a reasonable system, the more it costs to rent an office and run a business, the more doctors should be entitled to charge and collect. Unfortunately, politics determine your fees on a state-by-state basis and the stronger the insurance lobby, the lower the reimbursable fees.
As it was reported in 2011, and as it is still consistent today, two of the most expensive states to live in are New York and Hawaii, yet they have the lowest levels of reimbursement nationally. New York, which in spite of its ranking as 47th for cost of living, undoubtedly a result of its vast rural areas, pushes it out of the highest ranking. However, a 500-square-foot office in downtown New York City can cost $7,000 per month to rent, yet the maximum reimbursement a chiropractor can receive is $43 per visit, no matter what services the doctor provides. In addition, if the carrier sends for an IME after a few visits in order to limit the amount of care, a further reduction in the doctor’s ability to receive fair and equitable reimbursement may occur.
The reimbursement comparison between 2011 and 2013 revealed a potential 9% increase in collections for a personal injury visit on average when you combine all of the states. This statistic revealed a trend in the chiropractic profession that the personal injury population of patients is a financially stable sect within the industry. (Please note that this author is not suggesting that a doctor maximize his or her charges inappropriately and that only clinically indicated services should be performed based upon clinical necessity.)
:dropcap_open:The solutions are a strong political lobby with a unified chiropractic voice both nationally and statewide.:quoteleft_close:
Many doctors who read this report will feel that they must increase those portions of their practices with personal injury patients. From a reimbursement perspective and business plan, that would appear to make sense. However, is that doctor qualified? Treating trauma cases requires a very specific skill set and training no different than any specialist in any health care field. You wouldn’t want a psychiatrist performing open-heart surgery without the requisite training. At the very least, a doctor of chiropractic should have basic training in MRI interpretation and triaging the injured. Understanding the difference between a herniated, bulged, extruded, or migrating disk is critical in creating an accurate diagnosis, prognosis, and treatment plan in triaging and guiding the patient through care. Although the delivery of chiropractic may not change, when you can and cannot treat your patient might change because collaborative care with a medical specialist and or surgeon might be indicated. The etiology of pain in the trauma case is often dramatically different from in a chronic pain geriatric or pediatric patient.
The only way to spiral upward in success is through clinical excellence and the acquisition of knowledge and skill sets. Based upon past and currently published research, chiropractic outcomes have outpaced most other forms of treatment for conditions within our scope to treat. As a profession, the most direct avenue for these published studies to help increase utilization is for each doctor to be expert and credentialed in the area of desired practice. Treating personal injury patients is included in this formula.
In personal injury or any financial category, fair and equitable reimbursements will determine if a doctor can afford to live in any community nationally, and wise legislators will take into account the reimbursement statistics so as not to be “penny wise and dollar foolish,” unlike those elected officials in New York and to a lesser extent in Hawaii. The solutions are a strong political lobby with a unified chiropractic voice both nationally and statewide.