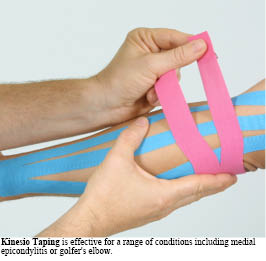 :dropcap_open:I:dropcap_close:n 1999 I was introduced to the Kinesio Taping® Method (KTM) against my will. I was working in rehab in New York City at the time, and a co-worker who had signed up for a course in Massachusetts that included Kinesio Taping had dropped out. My boss asked me to take her place mostly because I had a car and could drive the other two therapists who had signed up. I went grudgingly and with no expectations, as I had never heard of Kinesio Taping. Flash forward to today: I am teaching more than 20 seminars a year and writing about Kinesio Taping for the benefit of my colleagues. You just never know where life is going to take you.

Andrea Wolkenberg, PT, MA, CKTI, has been a practicing physical therapist for more than 30 years. She graduated in 1979 from the University of Pennsylvania’s School of Allied Medical Professions with a Bachelor’s degree in physical therapy. She also holds a Master’s degree in Medical Anthropology in 1986 from the New School for Social Research in New York City. Andrea became a Certified Kinesio Taping® Instructor (CKTI) in 2001. She is currently the Director of Physical Therapy at Spine Options, a pain management center in White Plains, NY, specializing in the conservative treatment of back and neck pain. She is also the President of Spine Solvers Inc., which provides physical therapy services to individuals, injury prevention and workplace safety seminars to businesses, and Kinesio Taping® seminars to health care professionals.