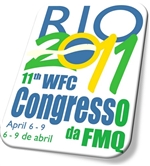 I recently returned from the World Federation of Chiropractic Biennial Congress in Rio de Janeiro, Brazil, and the experience was an eye-opener.  There were 900 attendees from all over the world and, because Brazil is getting ready to host the World Cup in 2012 and the Summer Olympics in 2014, the country was bustling with activity.

The quality of the research presentations at the WFC Congress was unparalleled, the best I have ever seen in chiropractic.  In fact, I have attended the International Society for the Study of the Lumbar Spine, one of the most prestigious conferences in the medical world, and the presentations in the WFC’s scientific program could easily have been delivered there.

I was particularly intrigued by the fact that the top three prize-winning papers presented at the Congress hailed from research conducted in countries other than the U.S.  Also, the winning papers focused on fresh topics and stayed away from chiropractic’s typical research emphasis on the low back and neck.  It was gratifying to see evidence that we are expanding our scope and finally researching other conditions that we have been seeing on a practical basis in our clinics for years.

Third prize was awarded to an Australian who had studied Temporomandibular Joint Disorder, or TMJ.  A researcher from Brazil who demonstrated that pain could be reduced in lab animals using the Activator technique was recognized with second place honors. His research showed not only that chiropractic works, but also how it works.  The grand prize went to a doctor from Denmark who established the effectiveness of chiropractic on non-cardiac chest pain.  In keeping with the trend, the highest ranking papers from U.S. researchers also avoided the topics of low back or neck pain, focusing on hypertension instead. One of the veteran researchers in attendance observed that every platform presentation involved randomized controlled trials, a first for chiropractic at the WFC. This Congress will likely be remembered as the one with a lot of “firsts,” an important acknowledgment of the progress we are making as a profession.

Following the theme of “firsts,” in the two days prior to the Biennial Congress, I had the opportunity to teach a technique seminar to Brazilian students for the first time. They were some of the most enthusiastic students I’ve ever encountered. They came early, stayed late, and wanted to absorb every possible aspect of the seminar. As an aside, over 75 percent of the students in attendance were female, so an increase in women practitioners is not something exclusive to the U.S.

I left Brazil with the sense that, while chiropractic is mature in the U.S., it is an emerging profession worldwide and one that deserves substantial notice. We still have work to do, especially because chiropractic is registered in only 90 of the 194 countries around the world. But, with research being conducted across continents and patients increasingly turning to chiropractic for their care, clinicians and patients are seeing results like never before.  I came home energized and ready to continue reaching out to students, not only in the U.S., but in international markets as well. They are our rising stars and, if the students I met in Brazil are a reflection of others around the world, we can feel confident they will carry the chiropractic torch with both pride and aptitude.

Dr. Arlan Fuhr travels extensively to chiropractic seminars, conferences and events around the world. He will be providing his insights and perspectives from these visits as a regular guest commentator for The American Chiropractor. You can reach him at 602-445-4230 or email [email protected]