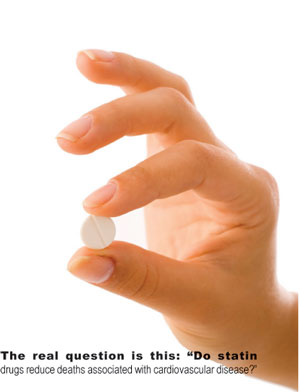 Accounting for 6.5 percent of the total market share, statin drugs are the most widely sold pharmaceutical drugs in history. To date, Forbes Magazine tells us that statins are earning drug companies $26 billion in annual sales.

Pfizer spends over $3 billion each year to convince us that we need more and more drugs to be healthy. The public and the medical profession have been bamboozled by the legions of drug reps, billion dollar ad campaigns, and creative statistics. Every weekday, some 38,000 Pfizer sales reps, roughly the size of three army divisions, make their pitches around the globe. They’re armed with briefcases full of free drug samples, reams of manipulated clinical data, and lavish expense accounts for wining and dining doctors and their staffs. The medical profession, its organizations, the media, and the public at large have swallowed the statin drug propaganda, hook, line and sinker.

In 2004, Pfizer’s blockbuster drug Lipitor became the first prescription drug to make more than $10 billion in annual sales. Over twenty-six million Americans have taken Lipitor, the most popular statin drug. Pfizer is now running full-page Lipitor ads in numerous papers, including The New York Times and USA Today. The ads feature Dr. Robert Jarvik, inventor of the artificial heart. The ad reads: In patients with multiple risk factors for heart disease, LIPITOR REDUCES RISK OF HEART ATTACK BY 36%.* The noteworthy part of this ad is the asterisk and this explanation of the 36 percent statistic: “That means, in a large clinical study, 3% of patients taking a sugar pill or placebo had a heart attack compared to 2% of patients taking Lipitor.”

Another Jarvik/Lipitor Times ad proclaims: “In patients with type 2 diabetes, LIPITOR REDUCES RISK OF STROKE BY 48%.* If you also have at least one other risk factor for heart disease….” The explanation: “That means, in a large clinical study, 2.8% of patients taking a sugar pill or placebo had a stroke compared to 1.5% of patients taking Lipitor.”

Twenty-six billion dollars a year for a one to two percent decreased risk for heart attack and stroke—that’s what all the fuss is about? It almost seems like snake oil. Yet, some doctors are recommending we put statins in the drinking water. Others are now suggesting that infants with a family history of heart disease should take statins as a preventative measure.

The Washington Post ran an article that reported on the PROVE-IT study: “‘The findings should prompt doctors to give much higher doses of drugs known as statins to hundreds of thousands of patients who already have severe heart problems,’ experts said.”

Perhaps “the experts” aren’t aware of studies that show low serum total cholesterol is associated with a marked increase in mortality in advanced heart failure.

The Post article goes on to say: “In addition, it will probably encourage physicians to start giving the medications to millions of healthy people who are not yet on them and to boost dosages for some of those already taking them to lower their cholesterol even more.”

The last line of the quote above should ellicit alarm from every taxpayer in America. Why? Because it will be the taxpayers who will pay for all those Medicaid and Medicare statin prescriptions, amounting to billions of dollars spent on worthless and dangerous drugs. Worse, we’ll also be paying for all the costs associated with the drug-induced side effects of the statin medications—congestive heart failure, polyneuritis, muscle pain, depression, memory loss (dementia), poor immune function, and fatigue, to name a few.

Okay, the real question is this: “Do statin drugs reduce deaths associated with cardiovascular disease?”

Contrary to the Lipitor ads, apparently not, since a meta-analysis of forty-four trials involving almost 10,000 patients showed the death rate was identical at one percent of patients in each of the three groups—those taking atorvastatin (Lipitor), those taking other statins and those taking nothing.

And what about using statins as a prophylactic measure?

A meta-analysis of five major statin drugs showed that statin drugs provided a total absolute reduction in total mortality of 0.3 percent among those who showed no signs of having cardiovascular disease (primary prevention). With respect to preventing heart attack and stroke, the five combined studies showed that statins prevented these events by a mere 1.4 percent.

We’d be wise to read the study below before putting statins in the drinking water.

The British Journal of Clinical Pharmacology reported on an analysis of all the major controlled trials before the year 2000 and found that long-term use of statins for primary prevention of heart disease produced a one percent greater risk of death over ten years, compared to a placebo.

The only thing statin drug trials have proven for sure is that statin drugs lower cholesterol by inhibiting an enzyme known as HMG-CoA-Reductase. Regardless of their ability to lower cholesterol, they failed to show that this effect has any meaningful benefit for preventing early death from heart disease, heart attack or stroke. And they’ve proven to be a catalyst for dangerous side effects.

The most common side effect associated with statin drugs is muscle pain and weakness. The symptoms are most likely due to the depletion of CoQ10, a nutrient that supports muscle function. One study found that 98 percent of patients taking Lipitor and one-third of the patients taking Mevachor (a lower-dose statin) suffered from muscle problems.

A Denmark study that evaluated 500,000 patients found that taking statins for one year raised the risk of nerve damage by about 15 percent—about one case for every 2,200 patients. For those who took statins for two or more years, the additional risk rose to 26 percent.

Former astronaut Dr. Duane Graveline describes in his book, Lipitor: Thief of Memory, his complete memory loss due to the side effects of Lipitor.

The incidence of congestive heart failure (CHF) has steadily increased since the introduction of statin drugs. In fact, while heart attacks have slightly declined, CHF has more than doubled since 1989. Statins were first prescribed in 1987.

An article published in the Journal of the American Medical Association reveals that, in every study with rodents to date, statins have caused cancer. In the CARE trial, breast cancer rates of those taking a statin went up 1500 percent.

And one last reason to avoid statins—men whose cholesterol levels are lowered through the use of prescription medications double their chances of committing suicide.

I applaud Pfizer for coming clean on their new Lipitor ads. I just hope the public and the brainwashed medical community pays attention to the asterisk and the fine print. A one to two percent benefit earns Pfizer ten billion dollars a year. Mind-boggling, isn’t it?

Rodger Murphree, D.C., has been in private practice since 1990. He is the founder of, and past clinic director for a large integrated medical practice, which was located on the campus of Brookwood Hospital in Birmingham, Alabama. He is the author of Treating and Beating Fibromyalgia and Chronic Fatigue Syndrome, Heart Disease What Your Doctor Won’t Tell You, and Treating and Beating Anxiety and Depression with Orthomolecular Medicine. He can be reached at www.treatingandbeating.com, by email at [email protected] or by phone at 1-205-879-2383.