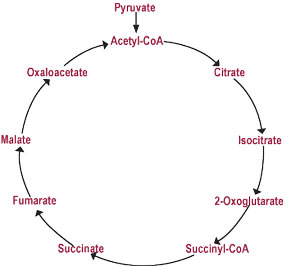 Oxygen is required to make adenosine 5’-triphosphate (ATP). Chronic hypoxia results in reduction of ATP. The body will respond by increasing anaerobic glycolysis, resulting in increased pyruvate production and increased lactic acid, both of which increase pain perception. The pain of fibromyalgia is caused, in part, by hypoxia (which is, in itself, painful) and the increase of lactic acid from increased anaerobic glycolysis.

Glucose is also required to make ATP. Therefore, the body will also respond by attempting to increase the genesis of glucose. The body can make glucose for the purpose of producing ATP by assembling it from smaller molecules, especially from amino acids. The process of assembling glucose from smaller molecules is termed gluconeogenesis. To make glucose from amino acids, the body has to break down proteins, a process termed proteolysis, and the best source of protein for this purpose is from the muscles. The pain of fibromyalgia is also caused by the proteolysis of muscle tissue that occurs in order for the required gluconeogenesis to increase ATP synthesis in these patients.

2. Fibromyalgia is primary when not associated with systemic causes, trauma, cancer, thyroid diseases and pathologies of rheumatic or connective tissues.

4. The best proposed etiology for fibromyalgia is chronic hypoxia.

5. These authors propose that fibromyalgia symptoms are predominantly caused by enhanced gluconeogenesis with breakdown of muscle proteins, resulting from a deficiency of oxygen and other substances needed for ATP synthesis.

8. Various treatment modalities have been tested in FM patients with poor results, including tryptophan, ibuprofen, and tricyclic drugs.

11. Magnesium is reduced by excess aluminum and/or excess calcium.

12. ATP production is controlled by the vitamins thiamine (B1), riboflavin (B2), and pyridoxine (B6) because they are essential for the electron transport system, and all three vitamins require magnesium to become biologically active.

13. During anaerobic glycolysis, from glucose to acetyl-Co A, there are eleven distinct steps; nine of the eleven [82 percent] steps require magnesium.

14. The Krebs Cycle (Citric Acid Cycle) has nine steps, and three of them require magnesium.

17. Aluminum has a high affinity for phosphate and blocks the absorption and utilization of phosphate for ATP synthesis, causing decreased mitochondrial ATP levels. Adequate levels of magnesium prevent this toxic effect of aluminum.

18. Malic acid is one of the most potent chelators of aluminum and is most effective in decreasing brain aluminum levels.

20. Malate deficiency is the cause of the ATP deficiency seen with exhaustive physical activity.

23. Fibromyalgia patients supplemented with a daily dose of 300-600 mg magnesium plus 1200-2400 mg of malic acid “all patients reported significant subjective improvement of pain within 48 h of starting.” Additionally, the fibromyalgia tender point scores were reduced by about 60 percent at four weeks and 66 percent at eight weeks.

Each capsule of the malic acid plus magnesium supplement I use in the management of fibromyalgia patients contains 294 mg of malic acid and 59 mg of magnesium. Each capsule also contains a balance of compounds that have also been shown to benefit patients with fibromyalgia: grapeseed extract, betatine HCL, silymarin extract, bromelain, papain, trypsin, lipase, amylase, pancreatin, lecithin (phosphytidal choline), l-leucine, l-valine, glucosamine sulfate, N-acetyl glucosamine, and ornithine alpha keto-glutarate.