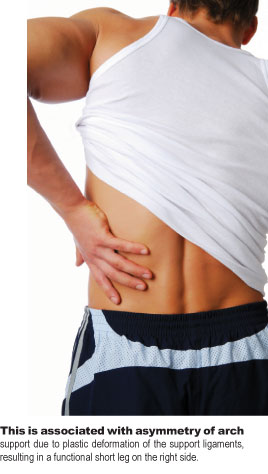 A 48-year-old male presents with persistent pain in his lower back region. He describes his back pain as an aching tightness, which has been progressively worsening over the past six months. On a Visual Analog Scale, he rates his current level of pain at around 35mm to occasionally 45mm. He is unable to identify any specific aggravating activities, but his efforts to lose weight by walking have made his low back symptoms more noticeable.

Vitals. This middle-aged man is trying to lose weight by increasing his walking. He now weighs 187 lbs, which at 5’10’’ results in a BMI of 27; he is overweight, but not obese. He is down from 205 lbs one year ago. He reports that he has not used tobacco since he quit twelve years ago, but he is a regular drinker of alcohol, averaging three “lite” beers daily. His blood pressure is 128/86 mmHg, with a resting pulse rate of 76 bpm. These findings are at the upper end of the normal range, but have reportedly improved since he started his exercise program.

Posture and gait. Standing postural evaluation finds a lower iliac crest on the right, and a low right greater trochanter. There is a moderate lumbar list to the right, with compensatory balancing in the thoracic spine, causing the left shoulder to be lower than the right. His right arch is significantly lower than the left, and the right calcaneus is everted. Palpation of the right arch when standing elicits no pain or tenderness in the plantar fascia. Gait evaluation finds hyperpronation with external foot flare on the right. The Navicular Drop Test demonstrates greater excursion of the right navicular bone from sitting to standing (non-weight bearing to weight bearing). Chiropractic evaluation. Motion palpation identifies several mild limitations in spinal motion: the right SI joint, L4/L5, T11/12, and at the cervicothoracic junction. Palpation finds some local tenderness in these regions, but no muscle tone or texture changes. Lumbar ranges of motion are full and pain-free, and neurological testing is negative.

Imaging Upright, weight-bearing X-rays of the lumbar spine demonstrate a moderate loss of intervertebral disc height at L4/L5, accompanied by small osteophytes. A mild lumbar curvature (5°) is noted, convex to the right side. A discrepancy in femur head heights is seen, and both the sacral base and iliac crest are lower on the right side, while the sacral base angle and measured lumbar lordosis are within normal limits. A collimated pelvic view with the femur heads centered finds a measured difference of 7mm in the heights of the femur heads, with the right side lower.

Moderate lumbar disc degeneration and osteoarthritis, and mild postural imbalance in the lumbar spine and pelvis. This is associated with asymmetry of arch support due to plastic deformation of the support ligaments, resulting in a functional short leg on the right side.

Support. Flexible, stabilizing orthotics were custom-made to support the plastic deformation in his right arch and calcaneus and to decrease the asymmetrical stress on the pelvis and spine. An additional layer of viscoelastic material was included to decrease shock transmission during walking.

Rehabilitation. He was shown a series of elastic tubing exercises to improve the strength and coordination of his deep spinal stabilizing musculature.

He responded rapidly to the adjustments and exercise, with an immediate decrease in symptoms. Within two weeks of receiving the orthotics, he was able to pursue his walking program without back pain. At a re-exam after eight treatments over two months, he demonstrated good spinal and pelvic alignment with his orthotics in place, and was released to a self-directed maintenance program.

The combination of spinal degenerative change, excess weight, and biomechanical imbalance became problematic when aggravated by increased exercise activity. With no noticeable foot or arch symptoms, this patient was undergoing plastic deformation of his right arch. The Navicular Drop Test helped to identify this condition. The result was a chronic asymmetrical strain on his pelvis and spine that was easily addressed with chiropractic methods.

Dr. John J. Danchik is the seventh inductee to the American Chiropractic Association Sports Hall of Fame. He is the current chairperson of the United States Olympic Committee’s Chiropractic Selection Program and lectures extensively in the United States and abroad on current trends in sports chiropractic and rehabilitation. Dr. Danchik is an associate editor of the Journal of the Neuromusculoskeletal System. He can be reached by e-mail at [email protected]