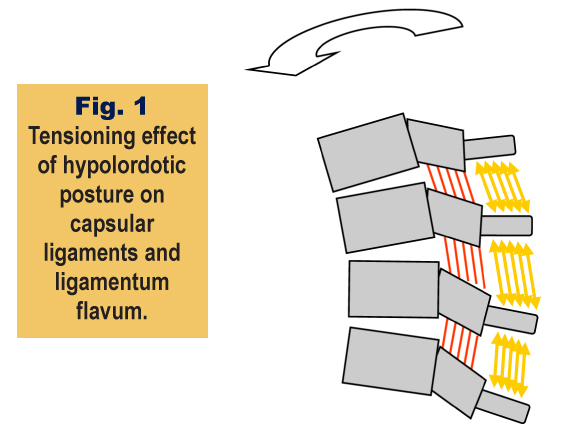 Last month we discussed the problems associated with hypolordotic lumbar postures as well as the protective effects of a healthy lumbar lordosis. I want to use this month’s column to cover the same ground as it pertains to the cervical spine. Patients walk into your office every day with complaints related to the cervical spine. Of the many symptomatic presentations we commonly handle as chiropractors, a sizeable percentage can be either directly or indirectly attributed to loss of the normal cervical lordosis. Hypolordotic and/or kyphotic cervical postures are associated with a wide range of problems. Conversely, a healthy cervical lordosis provides a large measure of protection to the neck. Consider the following fun facts.

Fact: Loss of the cervical lordosis predisposes the capsular ligaments to higher risk of injury in the event of trauma.1

Habitual carriage of the neck in a straightened or kyphotic posture pretensions both the capsular ligaments and the ligamentum flavum. This pre stressing effect can have severe ramifications in the event of sudden neck trauma such as whiplash injuries. A 2005 study in the Journal of Biomechanics, found that trauma to patients with such postures may elongate the capsular ligaments “by up to 70%”, “induce laxity to the facet joint”, and predispose the neck to “accelerated degenerative changes over time.” The authors concluded that “abnormal spinal curvatures enhance the likelihood of whiplash injury and may have long-term clinical and biomechanical implications.”  In the event your patient is involved in an auto accident following care in your office, and statistically the average American is in a car accident about once every six years,  the success or failure of your corrective care efforts to restore the lordosis may well determine how severely they are injured.

Fact:  Hypolordotic/kyphotic neck postures predispose the discs to injury while a healthy lordosis provides a protective effect.
We know that flexed (hypolordotic) postures result in potentially damaging disc mechanics. The anterior disc space is narrowed as the posterior disc space is widened with the result that the nucleus is forced posterior against the tensioned posterior annulus (See Fig. 2). White and Panjabi have stated that “the risk of disc failure is greater with tensile loading as compared to compressive loading.” 2  Restoration of the cervical lordosis provides protection to the posterior annulus by removing/reducing tensile stress to the posterior disc fibers and restoring normal weight bearing so as to discourage posterior migration of the nucleus toward the vital neural elements in the spinal canal and IVF (See Fig.3).

Fact: Normal lordosis is vital for the neck to have maximum resilience to compressive loads.
A 2001 study in the Journal of Neurosurgery, looked at the effects of cervical posture on the loadbearing ability of the cervical spine.3  During compressive loading, the straight spines failed through the anterior motor unit (disc and vertebral bodies) while the lordotic spines supported more of the weight on the posterior joints thereby sparing the disc and vertebral bodies. The authors concluded  “that a loss of a lordosis increases the risk of injury to the cervical spine following axial loading.”
In conclusion, the normal cervical lordosis is a highly protective posture for your patients.  Due to the limits of space, I haven’t even touched here on the protective effects of cervical lordosis to the spinal cord and nerve roots, the vertebral bodies, and to the reduction of a wide range of symptomatic complaints. If you aren’t already incorporating postural rehab methods into your treatment plans, you are leaving your patients wide open for future problems. And there’s really no reason for that to happen.  Effective treatment options are easily mastered, require no changes in your adjusting technique, and are affordable to the point of being downright cheap.

Dr. Mark Payne is president of Matlin Mfg., a manufacturer and distributor of postural rehab products since 1988.  A more detailed report on this subject is available for free, as well as a FREE SUBSCRIPTION to Postural Rehab…electronic newsletter on corrective chiropractic methods. CALL 334-448-1210 or email
[email protected]