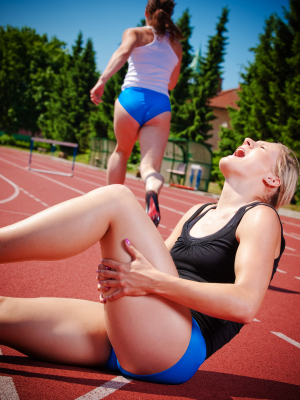 Hamstring strains are an extremely common occurrence in the sport of soccer. The hamstrings span two joints and are, therefore, subject to stretching at more than one point. Therapies for this type of injury have traditionally involved different forms of physiotherapy and soft tissue techniques.

Dorman2 reported on 140 hamstring injuries and found that they usually occurred either quite early or in the latter stages of practices or matches, and concluded that improper warm-up and fatigue are risk factors for injury.

What appears clear from the literature is the tendency for hamstring injuries to recur. Ekstrand and Gillquist3 prospectively studied male Swedish soccer players and found hamstrings to be the muscle group most often injured. Perhaps more important, they noted that minor injuries doubled the risk of having a more severe injury within two months. Others4 have noted a recurrence rate of 25 percent for hamstring injuries in intercollegiate football players. Despite such observations, it is not well understood why these injuries tend to recur so frequently.

A 15-year-old mid-field soccer player presented, complaining of chronic right hamstring pain. He had injured it approximately four weeks earlier and it had progressively worsened with time. He had not noticed any swelling; however, pain was experienced even with simple walking. He had stopped practicing/playing games for approximately two weeks and tried unsuccessfully to return to practice three days prior to departure to Florida.

On examination, there was no swelling or bruising.  Upon palpation, a large, muscular “nodule” was evident on the lateral aspect of the semimembranosus/semitendinosus belly, approximately half way up the posterior thigh.  When mild pressure was applied to the nodule, a sharp pain radiated superiorly toward the right gluteal fold. There was extreme hypertonicity and tenderness throughout the hamstrings.  Neurokinetic assessment showed that active and passive hip flexion was quite restricted and painful, as well as knee extension. Resisted hip flexion and knee extension was pain free; however, resisted knee flexion and hip extension reproduced the pain and broke with muscle strength testing.  The patient’s gait was assessed and he walked with a mild limp, not being able to completely extend the right knee, or push-off with any power with the right leg.

Chronic strain of the right hamstrings (specifically the semimembranosus/semitendinosus) with aberrant sensorimotor function.

Treatment involved specific applications of Trigenics neurological strengthening and Trigenics neurological lengthening procedures administered to the hamstrings group and other neurokinetically related muscles.  The patient was also instructed on the proper, post-procedural use of icing applications and was initially given gentle stretching exercises, which progressed to more aggressive stretches.  He was also advised to minimize the amount of training and game playing, until the pain subsided.  He was continually monitored throughout each day’s training session.

Team Ontario was in Florida for 10 days, training two times per day for six out of those 10 days, and playing the American Olympic Developmental Program teams for five out of the 10 days.  Needless to say, it was a rather intense period for the team.  As is standard with Trigenics protocols for injured athletes, the patient was treated consistently two times per day, before and after a training session/game, and his hamstrings were iced several times throughout the day.  Realizing that this injury had been chronic, it was amazing at how quickly the patient had recovered.  Immediately after the first day of treatment, he reported that his leg felt considerably stronger and more mobile and that he could finally walk without pain.  After the third day of treatment, the patient was running pain free, with powerful and explosive bursts.  By the fourth day of training, the patient reported feeling better than he had felt in months.  Normally, with any other treatment, such a chronic condition could sideline a soccer player anywhere from four to six weeks.1

We have continually kept up to date with current soft tissue treatments; however, after observing the benefits of the Trigenics sensorimotor treatment system, we are convinced that this is most definitely a significant breakthrough in the field of rehabilitation and performance enhancement. The multimodal approach used in Trigenics to treat causative aberrant neurology is, in our opinion, quite truly the “missing element” of care.

Dr. David Rick is a resident in the College of Chiropractic Sports Sciences of Canada and has a keen interest in the treatment and performance enhancement of athletes.